For the third consecutive year, Mercedes-Benz is the world’s most valuable automobile brand, growing eight per cent to US$65 billion, according to the latest report by Brand Finance, the world’s leading independent brand valuation consultancy.

The German brand has been investing strongly in R&D in the anticipation of new trends – particularly electric and autonomous vehicles – as well as implementing innovative new business models, including the recently expanded Mercedes Collection subscription service.

According to Brand Finance’s research, its customer service is the best in the business. That, combined with its new and existing model ranges and its excellence in design, is helping keep the brand one step ahead of its main competitor BMW (brand value US$40.5 billion). Unfortunately for BMW, the brand’s witty social media response to the departure of Mercedes’ CEO was not enough to generate growth this year.

Alex Haigh, director, Brand Finance commented:“Mercedes-Benz has stayed one step ahead of its competitors because of its commitment to service and model development. Despite his departure, Dieter Zetsche has set the brand up for long-term success.” 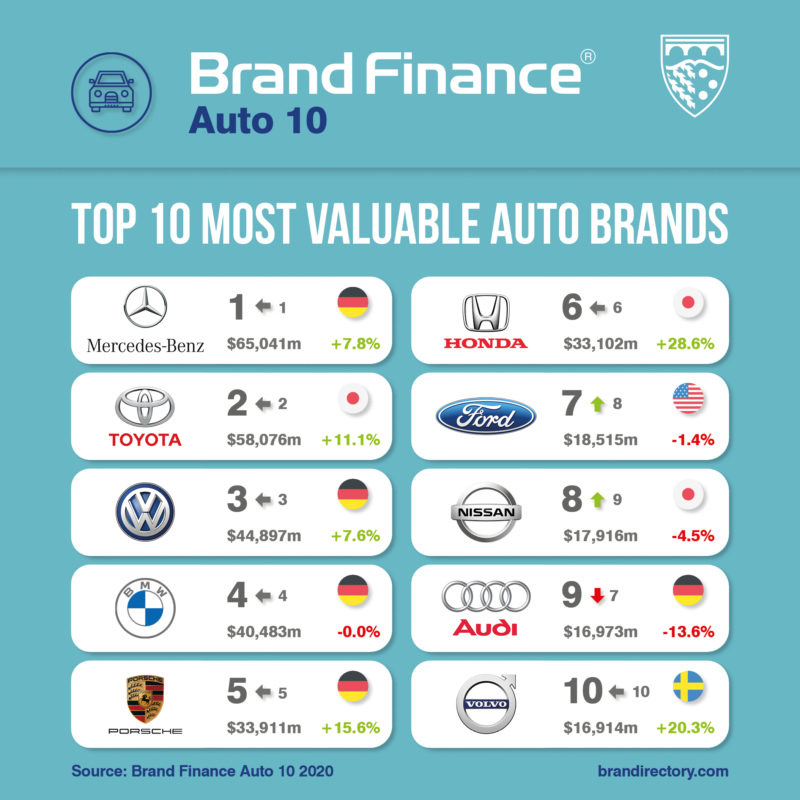 Volkswagen beaten by Toyota once more
For the second year running, Toyota’s brand value – helped by stronger growth in Asia – has grown faster than Volkswagen’s, up 11 per cent to US$58.1 billion compared to eight per cent to US$44.5 billion.

Battle of the SUVs
Jeep’s brand value rose an impressive 62 per cent this year to US$4.1 billion. As the fastest growing brand in the FCA portfolio, it has so far successfully embarked on its plan, unveiled in 2018, to broaden the brand into different segments and expand plug-in hybrid and electric options for the brand’s customers.

Land Rover, however, has not been as successful – falling 16 per cent in brand value to US$7.6 billion – hit by sluggish growth worldwide and in China, where it has invested heavily.

The impact of electrification
The growth of electric vehicles is probably the most important trend in this year’s ranking with electric-only brands recording some of the fastest growth and almost all the major marques launching electric ranges.

Tesla is racing ahead as the fastest-growing brand in the ranking, up an impressive 65 per cent to US$12.4 billion. The EV innovator has rapidly widened its footprint, with sales now in China, Australia, the UK, and several markets in Eastern Europe.

There have, however, been concerns of achieving production targets, but the announcement of a new factory – partly supported by the Chinese government – in Shanghai is set to solve production worries and puts Tesla in a position to capture market share in the world’s biggest market for electric vehicles.

NIO – China’s domestic answer to Tesla – features in the ranking for the first time claiming 64th position, with a brand value of US$1.1 billion, following stellar growth this year. Sales are growing fast, but the brand is struggling with high initial operating and investment costs and it is likely to be some time before it is clear if the brand can meet Tesla’s success.

Even Porsche, the most commercially successful luxury car brand and the fastest growing car brand in the top five, is becoming electric. It is futureproofing and cementing its strong position with the launch of the Taycan, making the brand the first traditional luxury car manufacturer to launch a fully electric model. Porsche has seen some of the fastest long-term growth of any brand in our ranking, built off sports cars and later SUVs and similar models. It is testament to the brand’s strength and wide appeal that its move to sports electric vehicles is one of the most hotly anticipated new models this year.

Haigh added: “Electric car brands and electric models from existing brands are the most interesting and dynamic part of the industry at the moment. Charging ability, performance and design are all developing at a pace faster than ever before”.

Aston Martin’s struggle to meet investor expectations on model production and delivery, and the delay on the roll-out of Bentley’s Continental GT range, weighed down respectively on these brands.

Lamborghini’s brand value this year, however, has increased 12 per cent and it is expected to grow exponentially thanks to the incredible jump in sales experienced by the brand on the Urus model, which accounted for roughly 60 per cent of overall sales volume. The Urus demonstrates that the SUV trend does not look likely to abate soon.

Ferrari has also achieved solid growth, recording a nine per cent increase in brand value to US$9.1 billion.

Slowing growth in China but Song stands out
Overall, Chinese automobile brands have fallen in brand value by just under US$1 billion caused by slowing growth – something the Coronavirus is sure to exacerbate.

However, 2020 saw strong performances by Song, Changan, Great Wall and Roewe. Song has benefited from the stellar success of its Song Max model, launched in 2017, and its brand value has risen by 63 per cent to US$959 million. Changan and Great Wall – primarily SUV-focussed brands – have continued to grow as their model specialism remains popular. Roewe performs strongly, a result of the brand’s commitment to embracing electric and hybrid models effectively.

Sweden overtakes Italy in total brand value
Sweden has overtaken Italy in terms of the total brand value of its homegrown brands for the first time this year in the ranking. This growth is all generated by two brands, Volvo and Scania, which have seen brand value increases of 20 per cent to US$16.9 billion and 21 per cent to US$2.6 billion respectively. Volvo is fully embracing electric vehicles – launching the Polestar luxury brand this year and shifting to electric across its portfolio – and is starting to reap the rewards.

Ferrari is sector’s strongest as it focuses on exclusivity
In addition to measuring overall brand value, Brand Finance also evaluates the relative strength of brands, based on factors such as marketing investment, familiarity, loyalty, staff satisfaction, and corporate reputation. Alongside revenue forecasts, brand strength is a crucial driver of brand value. According to these criteria Ferrari has retained its position as the world’s strongest automobile brand with a BSI score of 94.1 out of 100 and a corresponding AAA+ elite brand strength rating.

Ferrari announced five new models in 2019, including the SF90 Stradale and Ferrari Roma, both aimed at new market segments. The brand also established a manufacturing agreement with the Giorgio Armani Group to help push Ferrari collections into a more premium space. For years, Ferrari has utilised merchandise to support brand awareness and diversify revenue streams, but it is now taking steps to preserve the exclusivity of the brand, with plans to reduce current licensing agreements by 50 per cent and eliminate 30 per cent of product categories.

Haigh continued: “Ferrari is the world’s strongest brand because its brand’s power stretches across its sports fans and across luxury car owners. Pulling back from merchandising is shifting that balance in a bet that brand strength in its core segment is better than widely spread revenue.” 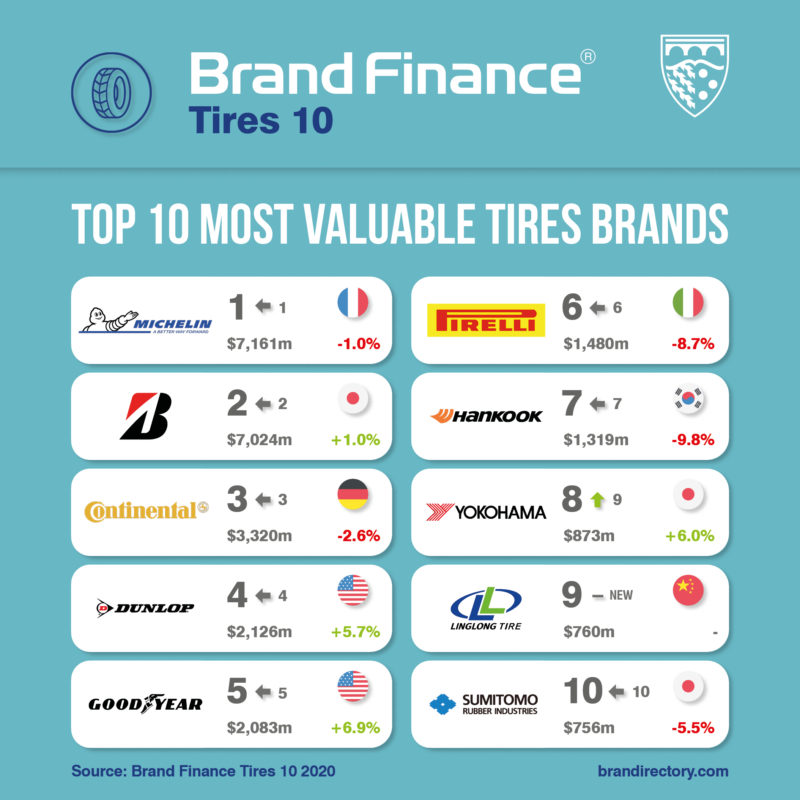 Michelin is the thought leader in the industry, its product diversification into puncture-less tyres with its Uptis prototype and association with premium events and excellent performance, have helped the brand maintain its strength and status.

Haigh concluded: “Michelin continues to innovate its products and market them and its brand in consistent and relevant ways. With so much history and appeal to play with, it is not surprising they’re the top in our table again.”