The Carzone Motoring Report is compiled by analysing data from the 80 million+ car views carried out on Carzone in 2019, as well as an in-depth survey of over 1,500 Irish drivers.

Going green
The latest Carzone Motoring Report finds that diesel remains the most popular engine type to drive with 58 per cent of motorists owning this type of vehicle. Over a third (39 per cent) own a petrol-fuelled car while only two per cent of respondents drive a hybrid or electric car.

It seems younger drivers (18-24-year olds) are more environmentally conscious with three quarters (77 per cent) likely to purchase an electric or hybrid car in the future compared to those over 45 years old (63 per cent).

Cheaper running costs (57 per cent), better for the environment (20 per cent) and tax incentives (10 per cent) were the top reasons why people would buy an electric or hybrid vehicle.

36 per cent of people were unaware of the government’s goal to reach 100 per cent of all new cars and vans being EV’s by 2030, and only 16 per cent feel that it is achievable.

Buying and financing a car
According to the report, 39 per cent of respondents intend to buy a car in the next year and nearly a third (31 per cent) change their car every two to three years. The main reasons for purchasing a car is simply wanting a newer car (30 per cent), the need for a more reliable car (21 per cent) or they require a larger car for a growing family (16 per cent).

It is clear from the data that Irish drivers are unsure when it comes to car finance, and the research highlights the perceived barriers to using car finance for motorists. Over half (55 per cent) of drivers are concerned about getting into debt, 44 per cent are sceptical about the lump sum required at the end of a PCP agreement and 40 per cent don’t like the idea of not owning the car outright when buying via PCP and hire purchase.

Using personal savings is the first option considered by car buyers when looking at financing a car (48 per cent) followed by a bank loan (41 per cent), Credit Union loan (34 per cent), hire purchase (16 per cent) and PCP (14 per cent). Browsing online (90 per cent) is the most popular way of researching car finance, followed by enquiring with a dealer (45 per cent) and getting recommendations from friends and family (25 per cent).

While most cars are still purchased in dealerships or private sale, motorists have become more open to buying a car online with one in 10 (10 per cent) saying they would buy a car online without seeing it first. 77 per cent say they would pay up to a €1,000 deposit online for a car while 17 per cent would be open to paying for a car in full online.

Money and markets
The research found that insurance remains the top financial concern for 64 per cent of Irish car owners. Almost one in five (17 per cent) cite the cost of fuel as their main worry, while 10 per cent say general maintenance of their car is a financial concern.

Commuting choices
Nearly three quarters (72 per cent) of respondents drive to work every day and 51 per cent feel that Monday morning is the busiest day for traffic. The research also found that while high numbers of motorists drive to work, only six per cent of commuters’ carpool with colleagues. 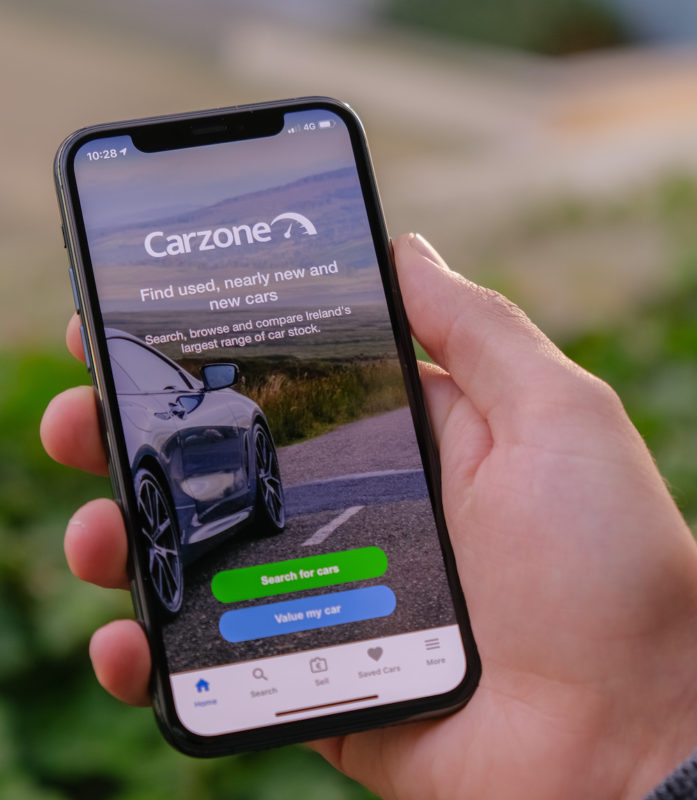 Commenting on the latest report, Karl Connolly, audience manager Carzone said: “Our latest Carzone Motoring Report is our eleventh edition where we examine trends and changing behaviours of Irish motorists. In our latest edition, we’ve put a significant focus on car finance options, alternative fuel engines and the introduction of the e-Scooter as a commuting option.

“Insurance premiums have been a top concern for several years and are still the key issue impacting motorists, with half of the respondents seeing their premiums increase in the year. The report has also highlighted the uncertainty among drivers when it comes to car finance options with one in four saying they don’t have a good understanding of car finance available to them.

“Awareness about the benefits of alternative fuel vehicles is on the rise among drivers with the announcement of the government’s Climate Action Plan. The plan aims to see nearly a million EVs on Irish roads by 2030, but not all motorists are confident this will be possible according to this year’s report. Our research found that 70 per cent of drivers would consider purchasing an electric or hybrid car in the near future which is a step in the right direction.”