Volvo Car Corporation is now ramping up production of the new V60 Plug-in Hybrid ahead of first customer deliveries in early 2013. After the initial batch of 1,000 model year 2013 cars, production will increase to 4,000-6,000 cars from model year 2014.

The assembly of the world’s first diesel plug-in hybrid has been successfully integrated on the same production line as the regular powered V60, V70, XC70, S80 and XC90 models at the Torslanda plant in Gothenburg.

This is a remarkable achievement considering that the sophisticated plug-in hybrid technology includes two complete drive trains and a powerful battery that provides a range of up to 32 miles on pure electric power. 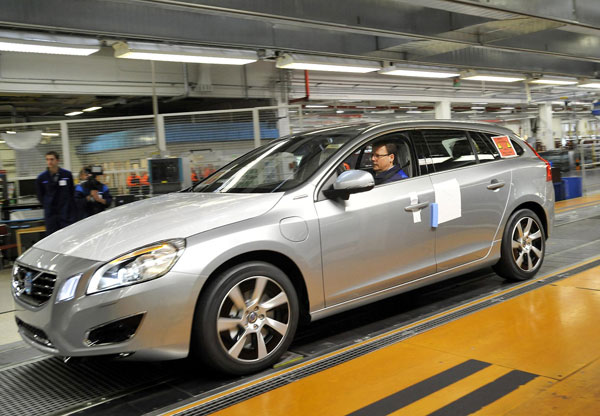 “We are first in the industry to integrate a plug-in hybrid in an established production flow together with other car models,” says Peter Mertens, Senior Vice President Research and Development at Volvo Car Corporation. “The integration in the standard production flow gives the plug-in hybrid buyer the possibility to choose in principle all options available for the standard V60.”

A few examples of the integrated production flow are:

• The electric motor along with its drive shafts is fitted on the same station as the final drive on the standard all-wheel drive models.
• The cooling system and the high voltage cables are assembled on the Pallet, which is used to assemble the car’s drive train and chassis parts.
• The battery pack is lifted in through the car’s tailgate short side forward. It is then spun a quarter of a turn in the passenger compartment – a manoeuvre that takes 60 seconds and carried out with less than 20 millimetres to spare.
“The 11.2 kWh lithium-type battery is the single most complex system in the car. The precision manoeuvre to get it in place is an excellent example of the state-of-the-art assembly process,” says Mertens.

The Volvo V60 Plug-in Hybrid is the synthesis of close cooperation between Volvo Car Corporation and Swedish electricity supplier Vattenfall. The two companies have financed the development project jointly.

“The V60 Plug-in Hybrid is a unique car, a historic step, not only for Volvo Car Corporation but for the entire car industry. The first year’s 1,000-car batch has sold out even before the car has reached the showrooms and the order books for next year’s cars are already filling up,” concludes Mertens.