The all-new Volkswagen Phideon luxury saloon is making its global debut at the Geneva Motor Show.

This innovative and luxurious four-door car is positioned above the Passat and the Magotan, which is available in China, and thus in the premium segment. The elegant new five-metre saloon will be launched on the Chinese market in the third quarter of this year. 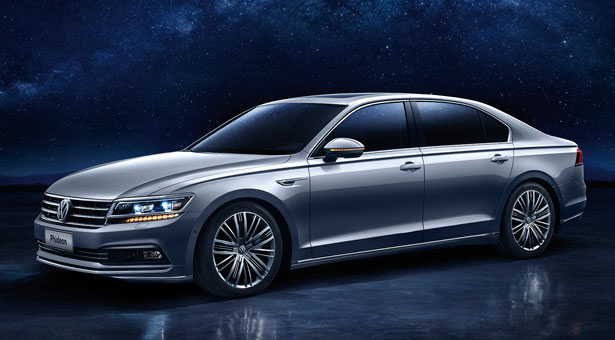 With the debut of the Phideon, which was developed and designed in Germany, Volkswagen is adding a crucial pillar to its model range. When designing this car, Volkswagen made use of the technical expertise of its Chinese partner, SAIC Volkswagen.

Particularly its extensive experience when it comes to the wishes and requirements of customers went into the creation of this premium saloon. SAIC Volkswagen will also manufacture the new model.

The Phideon also sees the debut of the new “face” of Volkswagen’s luxury saloons. Klaus Bischoff, Head of Design Volkswagen Brand: “The new Phideon, with its equally powerful and charismatic front end, its flowing and yet precisely drawn lines and the exceedingly dynamic proportions, exudes highest presence and superiority, while the Phideon’s progressive design corresponds to the high level of its technical innovations. Thus this avant-garde model, designed in Europe for our style-conscious Chinese customers, was born.”

Volkswagen’s design team is proud of the fact that it was possible to derive the Phideon almost directly from the breath-taking C Coupé GTE concept car, which was presented at Auto Shanghai in 2015, with only minor changes. From a technical perspective, the Phideon is the first Volkswagen to be based on the Modular Longitudinal Matrix (MLB). Its name – Phideon – is a construct standing for elegance and reliability, and phonetically and symbolically evokes Fides, the Roman goddess of fidelity.