Toyota has launched the 2015 Auris range combining hatchback and touring sports body styles with a choice of diesel, petrol and hybrid powertrains, and it says it has increased levels of specification. It has an entry-level price of €20,750.

The front and rear of the Auris have been redesigned. To the front, paired chrome wings are generated from the new, more prominent Toyota logo. It also gets more sharply-angled inside edge of new LED headlamp clusters which incorporate LED Daytime Running Lights (DRL). 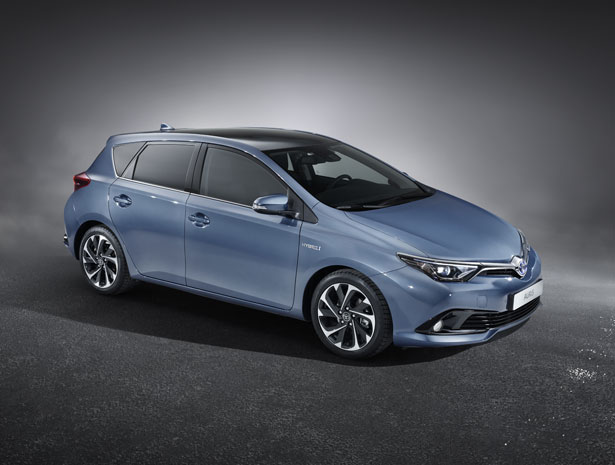 In profile, the new front and rear styling generates longer overhangs, improving the overall balance of the design. It also gets a new shark fin roof antenna and new, 16″ and 17″ alloy wheel designs. To the rear, the lower half of the Auris has been completely redesigned. The width of a deeper, more muscular bumper design is emphasised by the placement of reflector lamp housings at the extremities.

Inside, Toyota claims the sensory quality of the cabin has been significantly enhanced through a redesigned dashboard, premium quality surface and trim elements and a new 4.2″ colour TFT multi-information screen. The newly integrated Toyota Touch screen has now increased to a 7” size.

The new 2015 Auris also sees the introduction of a 1.2 litre direct injection turbocharged engine to the petrol line-up with the addition of a new 1.6 litre D-4D unit also. Toyota says that the 1.4 litre D-4D engine has been substantially upgraded and features numerous enhancements, claiming both improve performance and lower emissions. Every engine in the new 2015 Auris range now meets Euro 6 emissions regulations.

Toyota says that the Auris Hybrid’s is remarkably quiet, smooth, relaxed and stress-free driving experience has proven increasingly popular with C-segment customers, and today the Auris is the most sold hybrid in Europe. Toyota also claims that it offers best-in-class CO2 emissions of just 79 g/km and combined cycle fuel economy of only 3.5 l/100km, customers can enjoy significant tax incentives and exceptionally low running costs.

The Auris grade structure has been revised to bring Hybrid grades (Terra, Luna & Sol into line with the rest of the model range.

Toyota also claims that the new Auris range benefits from improvements in ride comfort and handling. Numerous measures have been introduced to reduce the transmission of Noise, Vibration and Harshness (NVH) into the cabin and soundproofing has been enhanced through the adoption of additional sound absorption materials.

Commenting on updated Auris for 2015, Steve Tormey, Chief Executive of Toyota Ireland said: “The new 2015 Auris ticks all the boxes for C-segment drivers who believe in beautiful design, exceptional driving experience and great value for money. With increased levels of specifications, new powertrains and improved performance, the new Auris delivers exactly what we believe Irish motorists are looking for.”