Never in the history of the automobile have motorists been provided with greater choice in terms of the powertrains available to them. With the options ranging from diesel, petrol, battery powered electric vehicles (BEVs), self-charging hybrids (HEVs), mild hybrids, and plug-in hybrids (PHEVs) there’s a lot for consumers to think about. 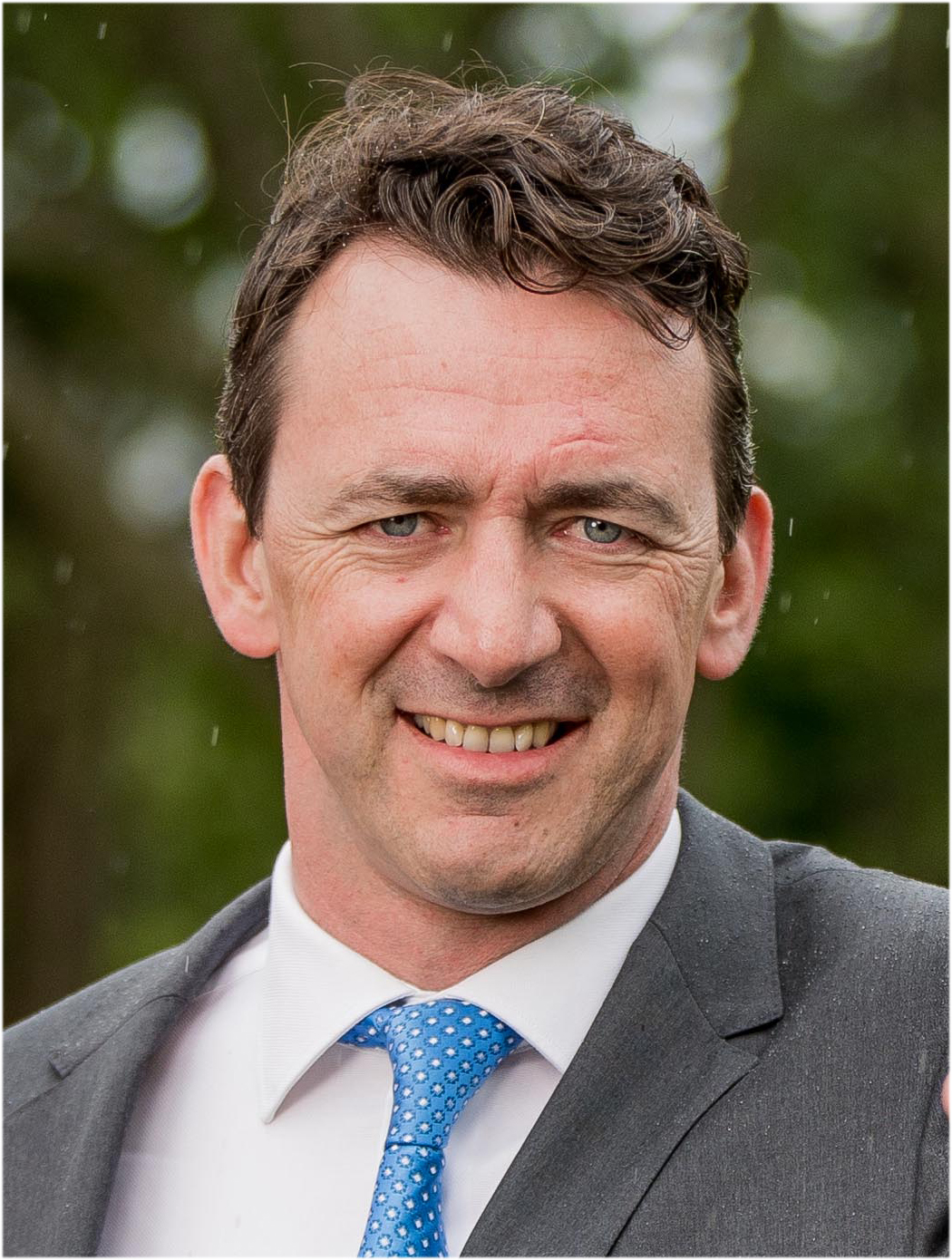 Toyota has made a number of big decisions in the past 18 months to prepare for the trends in the decade ahead which will give consumers who are buying a new car in 2020 some foresight and guidance. Toyota says it wants to give customers certainty on what their best options are in the years ahead.

Speaking from the coalface of the Irish motoring industry, Steve Tormey, CEO of Toyota Ireland, laid out his views on the wide range of options, and why for him hybrid is the best option for the vast majority of Irish drivers looking for an electrified drive.

“Toyota made the decision to invest in hybrid technology over 20 years ago as a key principle of its contribution towards sustainable development. Here the company was ahead of governments and consumers in foreseeing the decline in the conventional diesel and petrol cars in its move towards less polluting, more environmentally friendly options. In Ireland, for the first time ever, 2019 saw a hybrid becoming Ireland’s best-selling car (Toyota Corolla Hybrid), and the new Toyota hybrids sold that year alone will result in the reduction of 60,000 tonnes of CO2 from our environment over the course of their lifetime.”

The hybrid answer
Tormey continued: “Toyota has advanced its hybrid technology so much over the past 20 years that the latest generation hybrids drive in zero emissions mode 62 per cent of the time on average during daily commuting conditions. This is a major positive step towards a zero emissions society and given how well hybrids perform under the new WLTP regulations we expect that market share for self-charging full hybrids will hit 12 to 14 per cent in 2020.

“We are proud to say that Toyota is already delivering the lowest CO2 output of any car brand in Ireland. In fact, our average CO2 output across our range in Ireland was 17 per cent lower than the top 10 best-selling car brands.

“There are myriad other reasons to choose hybrid over other power trains including a higher resale value than diesels, relatively lower pricing compared to pure EVs and Plug-in hybrids, 30 per cent lower maintenance costs than combustion powered cars, up to 30 per cent better fuel economy than petrol cars and up to 11 per cent better than diesel cars.” 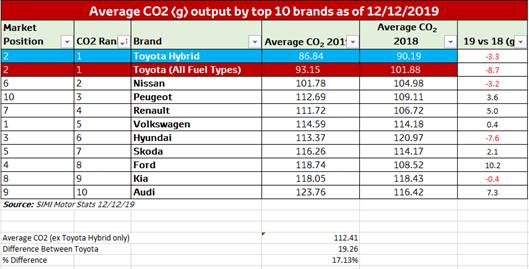 Diesel is still dead
Tormey added: “In a world that is seeing the implementation of city centre driving bans for diesel vehicles, there are a number of key future implications to consider while balancing the options around the impact one’s powertrain choice will have on the environment, such as future taxing legislation and resale values.

“In our view, it is absolutely time to say goodbye to diesel in cars for the majority of Irish consumers. While CO2 emissions on modern diesels can be lower than pure petrol-powered cars, they cannot drive in zero emissions mode like electrified vehicles, and the risk to human health caused by the high levels of NOX emitted by diesels means they are not a viable option. Diesels produce up to 90 per cent more NOX than hybrids and this fact was the driving force behind our decision to cease the sale of diesel cars in 2018. You also have to question the future resale value of diesels as more punitive NOX taxes are introduced in future Government budgets.

“At Toyota we would estimate that diesel sales will continue their downward trajectory and will likely be 35 per cent of the overall market in 2020, down from 46 per cent in 2019 and 71 per cent in 2015.”

Petrol
“We believe that the proposition around petrol in mid to large cars is fast diminishing due to the rising price of petrol, future WLTP driven tax hikes that will penalise bigger petrol engines and the high CO2 levels emitted. For these reasons we decided in 2019 to cease the sale of Corolla and Toyota C-HR petrol models from 2020, meaning that 90 per cent of our passenger vehicle sales in 2020 will be self-charging hybrid. The only petrol cars we’ll sell in 2020 will be 1.0 litre Yaris and Aygo – a move which reflects our view that bigger petrol engines have no future and consumers need to be mindful of this in what car they choose in the year ahead.

“As a powertrain, petrol sales have peaked for this reason and we see them declining to 35 per cent in 2020, with these customers moving into Hybrid and EV’s, rather than back into Diesel.”

Battery Electric Vehicles
Tormey said: “While BEVs come closest to providing a zero-emissions motoring environment they are not the panacea society at large is seeking – at least not today.  As anyone who relies on the public charging network will tell you, the infrastructure is just not ready for mass market EV driving, while hybrids can deliver 62 per cent zero emissions driving without the need to plug-in.

“There is also the matter of the relative scarcity of lithium and cobalt required to create EV batteries which means supply won’t be able to keep up with global demand. According to Emissions Analytics, the independent UK based think tank that monitors vehicle emissions, hybrids are 14 times better than battery electric vehicles at reducing real-world carbon dioxide emissions. Given the fact that 50 hybrid batteries can be created for every one EV battery, it is our view that hybrids have a hugely important role to play in our journey towards zero emissions driving.

“We believe that the next generation of BEVs will have a lot more to offer, and it is our hope that by the time we introduce BEVS in 2023 our charging infrastructure will be significantly improved and ready for prime time.
“For 2020, our view is that BEVs will continue to grow market share but will struggle to achieve more than six per cent of the overall market.”

Mild Hybrid
Tormey concluded: “2020 will see a surge in ‘Mild Hybrids’ coming to the market, but consumers need to be informed on the big differences between a full hybrid and a mild hybrid so they can make more informed decisions.
“A mild hybrid is a conventional petrol or diesel engine with a low voltage (48V) battery and an electric motor which is typically used to power electric components such as air conditioning and the radio. At low engine speeds they can supplement the engine with a small electric boost, but unlike full hybrids they cannot drive in zero emissions mode.

“Another issue with mild hybrids in Ireland is that most of them are diesel powered and produce up to 12 times more NOX than full hybrids, while emitting up to 30 per cent more CO2.  Given Toyota’s full hybrids are powered by a battery 12 times more powerful than that of a mild hybrid, full hybrids enjoy the savings that come with 29 per cent lower fuel consumption.

“With no improvement in driving experience (they are not automatic) and negligible fuel savings over conventional models it is our view that mild hybrids do not represent value for money.  Overall, we believe diesel powered mild hybrids will represent less than five per cent of the market in 2020, depending on supply.

Plug-In Hybrid
“Like HEVs, PHEVs have an important role to play in moving towards a more environmentally sustainable motoring society. However, they are a lot more expensive than HEVs and consumers need to be absolutely sure they will be able to take full advantage of the EV capabilities otherwise the proposition doesn’t stack up and has no cost benefit over a less expensive Hybrid.

“From our perspective the best potential to achieve the Government’s 2030 Climate Action Plan goals lies in a mix of alternatively powered vehicles. As such, over the coming years we will continue the development of our hybrid electric vehicles (which you don’t need to plug-in), as we also continue advancing our progress in hydrogen fuel cell technology and BEVs.”