Today FM’s Louise Duffy has teamed up with Ford to promote the launch of the new EcoSport SUV. 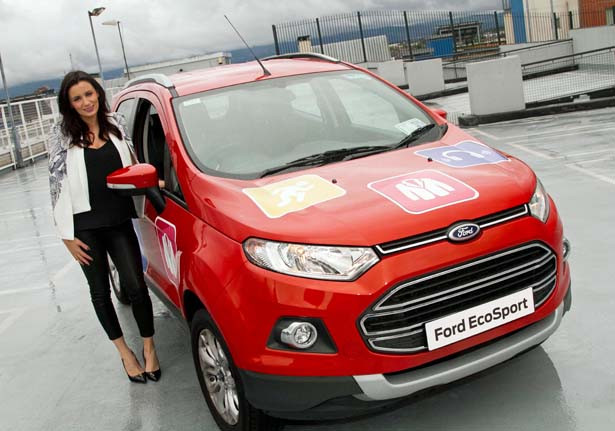 Over a three-week period, Louise and her EcoSport will star in a series of ‘webisodes’ (short video clips made available for download or streaming) which highlight the great capabilities of the EcoSport, Ford’s new compact SUV that offers drivers the perfect combination of small car agility, affordability, high technology and fuel efficiency.

Listeners to the show will also have the chance to win prizes up to a value of €5,000 as part of the promotion – full details on the Louise Duffy section of the Today FM website: www.todayfm.com/Ford.

Speaking about the new EcoSport, Louise said: “For both around town and on the motorway, the EcoSport is a great car – I love the high tech AppLink capabilities and the text reading facility which is ideal for someone like me who has to be constantly in touch…!”

The EcoSport promotion will culminate with a live on air competition on Friday July 18 that will take place as part of an outside broadcast from a specially developed EcoSport display in the window of Clery’s department store (Carphone Warehouse outlet) on Dublin’s O’Connell Street.  One lucky entrant will walk away with a cash prize of €2,000 on the day.

The EcoSport’s AppLink technology, a first for the motor industry, will enable drivers to access and voice-activate apps from their smartphone, including leading music streaming service Spotify; the TomTom turn by turn navigation service with audible instructions and on-screen mapping; and Hotels.com that enables booking of rooms in thousands of destinations across Europe.