Ireland is the 15th best European country to drive in, or the 23rd worst, whatever way you want to look at it.

This is according to Dayinsure, a British short-term car insurer, who combined multiple data sets from 37 countries in the European region including road fatalities per 100,000 people, quality of the roads, vehicles per 1,000 people, maximum speed, road length and cost of petrol to determine the best European countries to drive in. Excluding the small number highlighted on the map in blue for which full data was unavailable. 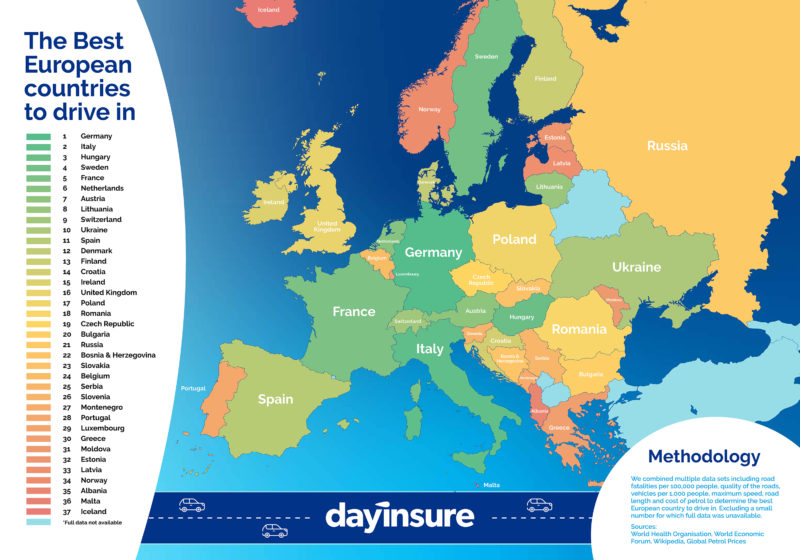 Iceland ranked as the worst country to drive in due to it having the most vehicles per 1,000 people, indicating busy roads and the second-highest petrol costs. It also finished in the middle of the table for factors such as safety and road quality.

On the other hand, Germany ranked first as the best European country to drive in. No surprise there. Its Autobahn allowed it to top the highest maximum speed category, but it also finished in the top 10 for safety and road quality and the top five for road length.

The UK placed behind Ireland in 16th, but according to Dayinsure it is the 4th safest country to drive in regarding estimated road fatalities. Ireland is 9th. The UK fell short in categories such as average petrol cost and the number of vehicles per 1,000 people.

The Swiss came out on top of road quality in Europe. In fact, Switzerland placed third overall worldwide, only losing out to the United Arab Emirates and Singapore. Dayinsure used the World Economic Forum’s yearly report, that includes quality of roads, as its source.

Ireland placed 41st on the worldwide list, 14 places behind the UK in 27th. Netherlands, France, Austria and Portugal make up the top five best quality roads in Europe, while Ukraine has the worst.

The full analysis and rankings from Dayinsure’s report can be viewed here.