The innovative Blue.on oil filter system, from filter specialist Hengst SE is being launched for the first time into serial production.

The functionally reliable and climate-friendly alternative to the classic spin-on oil filter is seeing its SOP (start of production) in the current Opel Astra model´s brand new 1.5 litre diesel engine. The 3-cylinder engine with an output of 77 and 90 kW was developed by the former parent company General Motors. The system has already won two German innovation awards. 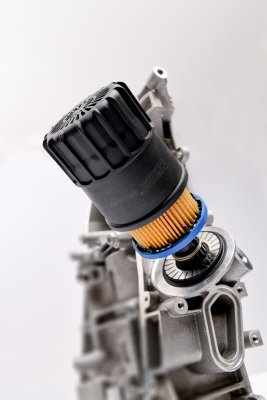 The concept of the Blue.on filter consists of a housing, a pipe with integrated filter bypass and non-return valve which are designed as lifetime components, together with a replaceable filter element. When changing the filter, only the fully incinerable filter element needs to be replaced.

Lifetime components guarantee OE quality for the entire life of the vehicle
Blue.on has been developed by Hengst SE as an alternative to the classic spin-on oil filter. The system consists of a housing and pipe designed as lifetime components with integrated filter bypass and non-return valve. These OE-quality components remain in the vehicle and are built to function perfectly throughout its life. Added to this is the fully incinerable filter element, the only component that still needs to be replaced when the filter is changed. This solves many of the problems associated with conventional spin-on oil filters. In addition, Blue.on saves up to 90 per cent of the waste mass produced by conventional spin-on oil filters, thus making an important contribution to environmental protection. 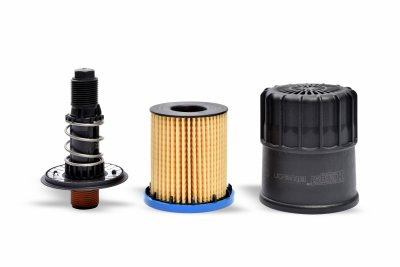 The Blue.on construction kit is continually being extended
Hengst is continuously extending its Blue.on offering. In addition to the Astra, for example, other models in future will be adapted to the new engine generations. With the Blue.on products, Hengst is able to meet the strong demand for flexible quantities and short development cycles.

The benefits of these modular products are self-evident: technical excellence combined with high cost-effectiveness. The modular system includes models with diameters of 67 and 77 mm, each available in lengths of 67, 77 and 87 mm. Hengst thus covers around 90 percent of all common spin-on passenger car applications. In addition, customer-specific adaptations are possible in terms of the filter element (filter medium choice and processing) and valve design (opening and closing pressure, flow rates, etc.).

Limitations of spin-on oil filters
Spin-on filters are closed systems so not possible to check the function of their individual components. This can lead to engine problems in the long term, especially when using cheap replacement products. For example, there is a risk if the filter efficiency is inferior to the original product, larger particles remain in the oil circuit, which permanently damage sensitive components such as the turbocharger.

A return valve with an opening pressure that is too low can also, via the bypass, result in contaminated oil remaining unfiltered in the oil circuit. In addition, if the particle absorption capacity of the filter medium is too low this also poses a high risk, because a filter that is clogged with particles runs permanently in bypass mode.

By contrast, the Blue.on ensures the functional reliability of the filter bypass and return valve by using high-quality OE components. Also, because they are visible and accessible, it is possible to check if they are working properly when replacing the filter. A patented filter insert also prevents installing a wrong filter element. This makes the Blue.on the most economical solution for ensuring a high level of engine protection throughout the entire life of the vehicle¤

Comprehensive climate protection
Around 800 million vehicles worldwide are currently on the road with spin-on oil filters. With conventional, closed systems, the entire unit must always be replaced and disposed of. This results in enormous environmental pollution and waste. With Blue.on, Hengst follows its comprehensive approach to waste avoidance.

The system, in which only the fully incinerable filter element needs to be replaced during maintenance, can save up to 90 per cent of the waste mass produced by conventional spin-on oil filters by using the lifetime components that remain on the engine block when the filter is replaced. Hengst prepared the groundwork for waste avoidance as early as 1993 with the development of multifunctional modules using the “Energetic” filter insert. Hengst now offers the system in its sixth generation.

Award-winning innovation
Hengst Filtration has already been awarded two important German innovation prizes for the Blue.on: This includes the “Innovation Prize of the State of North Rhine-Westphalia”, which is awarded for outstanding research of particular social significance and applicability.