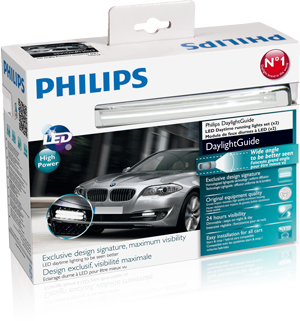 The European Union’s research into road accidents concluded that half of daytime accidents were caused by one road user failing to see another in time. In response the European Commission decided that all new car models had to be equipped with dedicated DRLs from February 2011. Soon all new cars will be sold with factory-equipped DRLs, but even now there are still hundreds of thousands of new cars being sold across Europe without DRLs and, of course, the majority of cars on Europe’s roads do not currently have DRLs.

Style has always been a major consideration for motorists and Philips produces aftermarket upgrade lights that are designed to allow motorists to see and be seen with a lighting solution from the crowd both in aesthetic and performance terms. The DRL market is further benefitting from Philips’ innovative thinking, with the introduction of the DaylightGuide.
Lightguides are the future of the LED DRL market. Instead of a row of individual LED lights, the lightguide offers a seemles strip of intense light – whose visual effect is one of uniform light diffusion rather than the dots of light seen on previous DRLs .

The units are composed of two linear “strips” which offer the widest angle light output yet for retro-fit DRLs and the dimensions are the same as the current Daylight 8.
daylightguide

As well as being in tune with current automotive styling trends, DaylightGuides offer a wide angle of visibility – with commensurate safety gains.

The lights are set in high quality aluminium housings, are weatherproof against salt, dust, sand and the waterproofing extends not just to the units but also to the connectors. The DaylightGuide is dimmable and is compatible with electric, Hybrid and Start-Stop system equipped cars. They are manufactured to OE quality standards and are fully ECE R87-compliant.

Philips has designed the DaylightGuides to be as easy to fit as the rest of its existing DRL range and they use the same smart, clip-on system. The lights are easy to integrate into the car’s bodywork, thanks to their small depth and they require no additional space for the brackets.

Philips LEDs are used by vehicle manufacturers such as Audi, BMW, Chevrolet, Chrysler, Ford, Jaguar, Mercedes, Nissan,  Peugeot and Toyota. Philips introduced its first LED DRLs for retro-fitting in 2009. It further developed and enhanced the range with the DayLight 4 and 8 models in 2010 and, in 2012, the company has innovated once again with the introduction of the DaylightGuide DRL units.

Philips DayLightGuides are now on sale throughout Europe