Peugeot has unveiled a four-wheel drive 308 R hatchback model, equipped with a plug-in petrol hybrid unit boasting 500bhp, presented not as a concept car, but as a production car of the future. Offering truly extraordinary performance, the Peugeot 308 R Hybrid model borrows design codes from the Peugeot Quartz concept car, first unveiled by Peugeot in 2012. Cloaked in an intensely blue paint, specially developed using fluorescent pigments and glass particles, the rear doors are matte black, a trademark of performance cars from Peugeot. 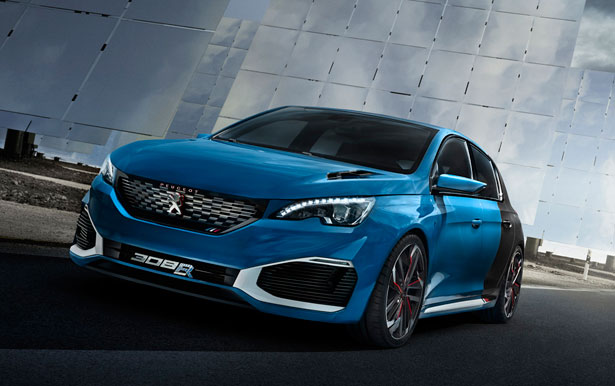 Pinned to the ground on 235/35 R19 tyres and set on tracks that have been widened by 80mm, the Peugeot 308 R HYbrid devours the road. Its front end is imposing with a checked-pattern grille, which works to supply the powertrain with air. The white side air scoops house LED indicators, while the central scoop sports the car’s signature 308 R HYbrid badge, carved into the block. At the rear, a narrow spoiler at the top of the tailgate reinforces the aerodynamics.

The doors open to reveal an impressive interior, structured by a stretched-out central console and four bucket seats. The selected materials and colours clearly state the aim of Peugeot 308 R HYbrid: performance. The upper fittings and the roof lining are slate grey. The bucket seats are upholstered in fawn-coloured perforated leather. In true sporting tradition, the interior is finished with touches of red, especially around the dials, the steering wheel centre marker and the central console. For the first time ever, PEUGEOT 308 R HYbrid has adopted a set of materials taken from the range usually reserved for concept cars only. Hence, the dashboard is covered in a fabric produced using a digital weaving technique. This innovative material can be used to produce large, complex parts that are soft to the touch with no need for foam, making for a lighter vehicle. The digital fabric is used on the door panels together with black leather and the same fawn patinated leather as the seats.

Thanks to the innovative architecture of the Peugeot i-Cockpit, the driver is fully in control of the 500bhp supplied by the powertrain. The compact steering wheel, upholstered in perforated leather and bearing the 308 R HYbrid logo, allows for precise, incisive positioning when cornering. The steering wheel paddles are immediately to hand, giving the driver finger-tip control over the six-speed gearbox. And the head-up display provides all relevant driving information, without the need to take your eyes off the road.

Development of the Peugeot 308 R HYbrid was entrusted to Peugeot Sport. They were challenged to developing an efficient petrol hybrid plug-in powertrain, integrating it into the EMP platform and setting new limits in terms of performance. The powertrain combines three sources of power: a 4-cylinder petrol 1.6L THP 270 S&S engine, with the highest special power rating in the world for this engine size; an electric motor with power of 85 kW / 115bhp, linked to the 6-speed gearbox; an electric motor with the same characteristics on the rear axle. The result is quite simply astounding. Developing 500bhp with four-wheel drive, the Peugeot 308 R HYbrid has its speed limited electronically at 250 km/h, delivers 0 to 100 km/h in 4.0 seconds and covering 1000 m from a standing start in 22.0 seconds. In spite of all that, CO2 emissions are just 70 g/km.

Jean-Philippe Delaire, Head of Development of the Peugeot 308 R HYbrid powertrain, Peugeot Sport said, “If we were able to reach this kind of performance on a segment C vehicle, it is all down to our passion for a challenge and our desire for excellence. Peugeot 308 R HYbrid is part of a very select club of cars reaching 0 to 100 km/h in less than four seconds.”

Bruno Famin, Director at Peugeot Sport, said, “Peugeot Sport’s expertise applies an uncompromising approach to meeting targets. With our experience in hybrid vehicles developed with the PEUGEOT 908, the high-performance hybrid powertrain fitted to the 308 gives a glimpse of the potential for ultra-sports models in the future.”

For impeccable dynamic handling, the car’s weight has been re-centred and placed as low as possible; perfectly balanced, with 60% of its weight to the front and 40% to the rear, the Peugeot 308 R HYbrid has a fiery spirit but an incredible weight/power ratio, barely reaching 3.1 kg/hp. The Lithium-Ion 3 kWh battery has an excellent ratio between power and size, and has been placed under the rear seats in place of the fuel tank. In turn, the 50 litre fuel tank has been placed in the boot above the rear electric motor and the two transformers. Peugeot Sport engineers have completely redesigned the bottom of the fuel tank so that it sits tightly up against the technical components. The few millimetres thus gained on the vehicle height contribute to its performance.

Thanks to the all-wheel drive system, the handling of Peugeot 308 R HYbrid is pretty formidable, especially coming out of the bends. The braking system is on a par with the car’s performance with 380 mm ventilated discs at the front, gripped by four pistons and 290 mm discs to the rear. However, they are not used every time the brakes are applied, because Peugeot Sport has designed the powertrain to decelerate using the electric motors throughout the full speed range, starting at 250 km/h. Not only does this preserve the discs and pads, but this regenerative braking system is also one of the three ways of recharging the battery. Another recharging strategy uses the front electric engine as a generator, driven by the petrol engine. The third solution is a rapid recharging terminal restoring the battery to its maximum power in just 30 minutes.

Since its launch, the Peugeot 308 has won over more than 280,000 customers worldwide. Demonstrating its global appeal and fulfilling a clear objective of continued growth in China, today, at the Shanghai Motor Show, the lion-brand has launched a new 308 S model, built for the Chinese market. Maxime Picat, Managing Director at Peugeot said, “The Peugeot 308 is a definite commercial success. It has already received 24 awards, including the prestigious European Car of the Year 2014. Today, the Peugeot 308 is reaffirming its status as a global car with the launch of the new 308 S in China. Tomorrow, the 308 R Hybrid version will become the brand’s icon.”