The winners of the International Driver of the Year, The Inaugural FIA Celtic Trophy, Sexton Trophy and the prestigious Billy Coleman Award have been announced at the Motorsport Ireland Awards Ceremony held in Dublin.

John Treacy, CEO of Sport Ireland joined Motorsport Ireland and guests as the best of Irish Motorsport were recognised for their outstanding achievements throughout 2016.

The Billy Coleman Award for the Young Rally Driver of the Year was won by 24-year-old Josh Moffett, from Monaghan, who narrowly beat runners up Gary McNamee (Oldcastle, Co Meath) and Callum Devine (Claudy Co Derry) to the title. 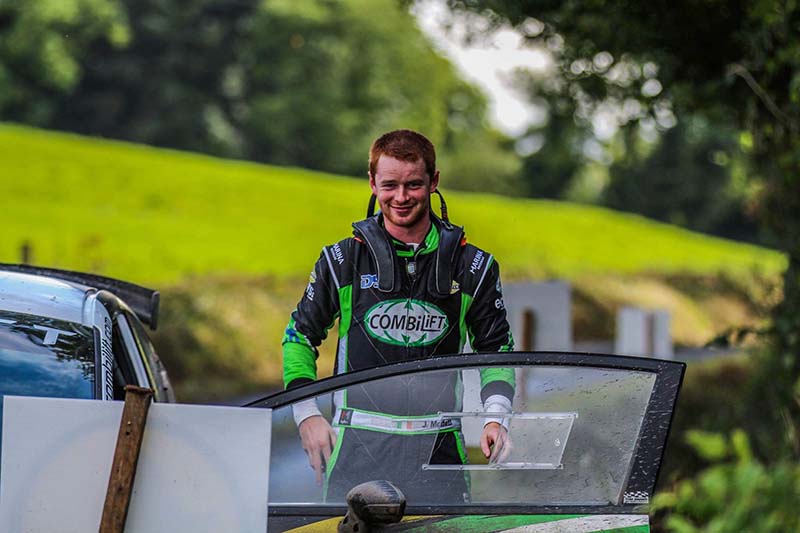 Josh, from Monaghan, was nominated for the prestigious award on the back of some great results this year. He had some excellent performances in the Irish Tarmac Championship, and secured his first International win at the Cork 20 Rally.

Speaking at the awards ceremony in Dublin, Moffett said: “Winning the Billy Coleman award has been an ambition of mine since I first started in the sport. I am thrilled to have won especially having been in the final running a few times before. I am honoured to be chosen especially when I look at the other drivers I was up against this year.

“This award opens up so many doors. When I look at the previous winners like Craig Breen, Keith Cronin and Daniel McKenna and what they have achieved I get excited about the future. It makes me even more determined to succeed.”

Cian won the Boss Ireland Championship this year despite competing on occasion against far superior race cars. He secured a remarkable five outright wins, three second places and four thirds on his way to being crowned champion. Cian intends to compete in the British Formula 3 Cup next year and has already tested the new car in Silverstone at the Walter Hayes Trophy where he secured a pole position and second place finish in his first outing.

Cian said: “It will be an absolute pleasure to race under the Motorsport Ireland and Sport Ireland Banners. I believe I have the pace to be extremely competitive on the track and I intend to bring home some wins to Ireland in 2017.”

The Manley Memorial Trophy for the International Driver of the Year went to Craig Breen, from Co Waterford, after he became the first driver from the Republic of Ireland to secure a works drive with Citroen in the World Rally Championship.

The winner of this award is selected by the motor sport media and is presented to an Irish competitor from the 32 counties who has not only proven to be a success in competition but also has acted as a positive role model and ambassador for the sport.

Breen, who came to prominence this season for the Abu Dhabi Total World Rally Team, and his co-driver Scott Martin, have been added to the Citroën WRC team for 2017. He has driven for Citroën in a DS 3 in four WRC rounds this year achieving top 10 finishes in each. The season highlights included claiming a maiden podium with third place in Finland and finishing fifth in Corsica.

Craig said: “The last twelve months have been fantastic in terms of my career to date. Securing a first ever WRC works drive is phenomenal and receiving this award tops my year off completely. I have worked very hard, remained focused and am very driven to achieving my goals.  I hope that I have shown the young drivers around the country, that whether they are just starting out or are part of the Motorsport Team Ireland set up that if you can keep focusing on your dream that one day it might just happen.
“This award carries with it a great responsibility and is as big an incentive as I have ever had to continue to strive to win more in the future. It is an honour to be recognised amongst some of the greats of Irish Motorsport and I intend to acknowledge this by continuing to be the best I can. I can’t wait for the next season to start and the opportunity to represent my country on the biggest stage of all.

“I would like to thank my family, friends, and management that have given this fantastic chance for a childhood dream to be achieved.”

Craig joins a long list of previous winners that includes luminaries in the motorsport world such as Matt Griffin, Austin MacHale, Eddie Irvine and Derek Tohill to name but a few.

The Inaugural FIA Celtic Trophy was won overall by Keith Cronin and Mikie Galvin. The competition is spread over five rallies in the UK and Ireland. Cronin, a three-time British Rally Champion, won two of the five rounds and placed high enough to take the trophy ahead of nearest rival Sam Moffett. Group winners also presented on the night were David Guest and Paddy Robinson, who won the Group N title (ERT2), and Callum Devine and Keith Moriarty, who won the two-wheel drive (ERT3) and ERT junior titles.

The Ivan Webb Memorial Award for Most Outstanding Contribution to Irish Motorsport went to Kevin Barrett, from Maynooth, Co Kildare, who has been an integral part of the Irish motorsport community for many years and a huge supporter of the National Rally Championship both as a competitor and sponsor of the championship through the Triton Showers brand.

The JC Millard Memorial Award for Clubman of the Year went to James O’Brien from Co Cork, for his contribution to the sport both as an organiser and competitor.

Speaking at the awards, Motorsport Ireland President Martin McKenna said: “Every year it becomes harder for the selection panels to choose the winners of the various categories. The pool of very talented and skilled drivers is growing each season and alongside our partners in Sport Ireland, we are excited about the future for the sport.

“This year’s recipients have a great opportunity to further their careers, which I hope they can take advantage of. The awards are internationally recognised and many of the previous winners have gone on to compete at the highest level of their chosen discipline abroad. Craig Breen, who won the Billy Coleman in 2009, is now on the WRC circuit as a works driver with Citroën, while a former Sexton Trophy winner, Niall Murray, went on to break all sorts of records in Formula Ford both in Ireland and the UK this year.

“We launched the Motorsport Team Ireland programme in February of this year to help talented drivers progress in the sport. Judging by the progress they are making and the winners here today, the future of Irish Motorsport is very positive.”