NGK-sponsored motorcycle racer Chrissy Rouse has been signed up by a leading team that competes in the Bennetts British Superbike Championship.

The 22-year-old made his debut with the Movuno.com Halsall Racing Team aboard a Suzuki in the fifth round of the championship at Knockhill in Scotland and although he failed to finish in both races he said it was “a dream come true.”

Chrissy said: “Ever since I started racing I wanted to ride in Superbikes so to get an opportunity like this is just incredible. To get to the highest level of racing in this country is fantastic and to make my debut at a circuit where I’ve watched so many of the leading racers is surreal.

“To join such a professional and well-established team with such a successful manager as Colin Wright is an amazing opportunity for me. I had a small crash in the first race at Knockhill and a mechanical fault in the second race, but I am reasonably pleased with my performance. I didn’t have any major expectancy before I made my debut and I have an awful lot to learn but I’m really looking forward to the next meeting.”

Superbike racing motorcycles are derived from standard production models and differ only slightly from the sports bikes seen on the roads. This makes BSB very appealing to manufacturers and has led to the well-coined phrase “win on Sunday, sell on Monday”. Superbikes are both quick and powerful – 1000cc with as much as 220bhp. 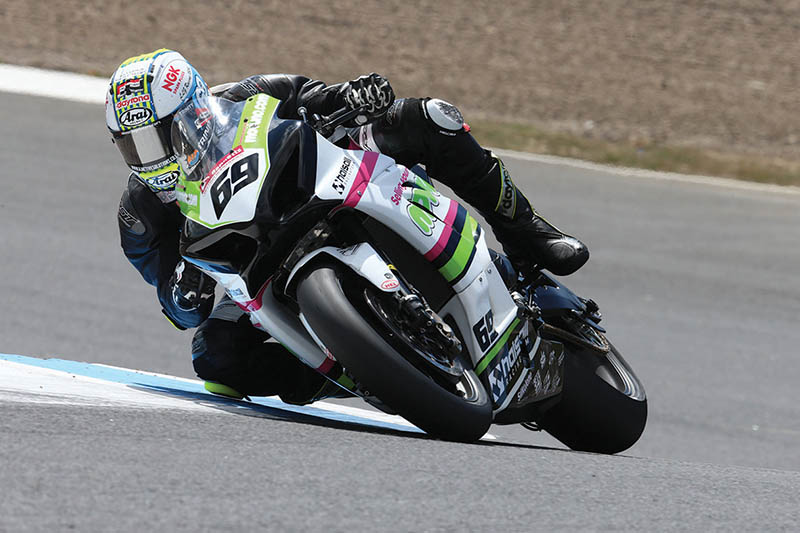 Chrissy has moved over to Superbikes after riding for the Quinnstheprinters.com BMW by IMR team in the Pirelli National Superstock 1000 Championship where he was in fourth position in the championship prior to his move.

He said: “There are no electronic aids on Superbikes although the brakes are better, and the tyres have more grip. It’s a different way of riding but I’m determined to learn and will hopefully get accustomed to the bike quickly.”

Ignition specialist NGK has been a long-standing supporter of Chrissy, who hails from Burnopfield near Newcastle and is due to start teacher training soon after completing his mathematics degree at Newcastle University.

He said: “I’ve got a brilliant relationship with NGK and particularly their local Sales Representative Paul Wheatley. Paul and NGK have supported me as I’ve gone through the different championships and have given me marketing and product support which has been fantastic as well as supporting me at meetings and inviting me to motorsport events where they have been exhibiting.”

Mark Hallam, Marketing Manager, NGK Spark Plugs (UK) Ltd, said: “We are delighted to continue to support Chrissy as he takes his first steps in the premier form of British motorcycle track racing. I’m sure that he will quickly progress in the championship and that his exploits will be followed closely by the many NGK customers who are Superbike fans.”