For the first time, the Czech compact-SUV will be available in two variants. one will be designed to be a stylish Yeti model for about town, and the other Skoda calls an adventurous off-road Yeti.

Both design variations of the Yeti will feature a new front and rear, new alloy wheels, a fresh interiors, as week as new new Skoda ‘Simply Clever’ ideas. Skoda also promises improved functionality and extended engine/gear combinations. Both new models are to be unveiled at the Frankfurt Motor Show next month and by the end of 2013, both new variants of the Yeti will have been launched in some European markets. No launch date has yet been announced for the irish market. 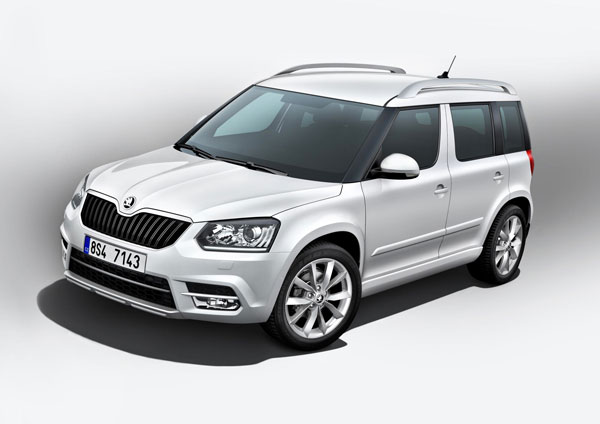 Skoda promises a significant differentiation between both versions. The front and rear elements, such as bumpers, side mouldings and door sills are either in the body colour or in the case of the the Yeti great outdoor’s version, it remain in black plastic.

The new fronts of both vehicles are now horizontally more accentuated and feature a distinctive grille and redesigned headlights. And for the first time the Yeti will have Bi-Xenon headlights as an optional extra. In keeping with Skoda’s new design language, the front headlights are now rectangular and are now located further under the front bumpers.

The Yeti’s new rear has got a new layout. This includes a new form of tailgate with more distinctive tail-lights now in even more precise moulded C-Design, available with LEDs as an optional extra. Also, in line with the new Skoda look, two cubist triangular elements alongside the new brand logo.

The wheel program has also been expanded with some newly designed, attractive alloy wheel designs. There will also be a wider selection of colours available, including some new metallic finishes.

The new Yeti models have got an all-new fresh interior – with new 3-spoke steering wheels in many variations, new fabrics and patterns for the seat covers as well as new decorative trims on the dashboard.

Irish pricing and specification will not be announced until we get nearer to the on sale date, which is likely to be early next year.
When it does arrive here Skoda Ireland will have chosen from a possible selection of four diesel and three petrol engines for the new Yeti – all turbocharged and with direct injection. The performance spectrum ranges from the 1.2 TSI with 77 kW and 105 bhp to the 2.0 TDI with 125 kW and 170 bhp. The fifth generation front or all-wheel drive with Haldex coupling will be fitted depending on the engine specs. With an automatic transmission, the new Yeti will exclusively uses the modern six or seven-speed dual clutch transmission (DSG).

Watch this space for more on this after the Frankfurt Motor Show.