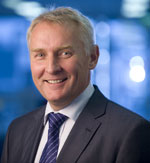 Currently Arne holds the position of President of Volvo Group Australia. He will take up his new position in the UK on October 1st. He will be based at Volvo Group UK’s headquarters in Warwick.

In the interim, Volvo Trucks’ Commercial Truck Director Ian Mitchell has been appointed Acting Managing Director for the period until Arne’s arrival on October 1st.

Arne was born in 1958 in Norway. He graduated from Agder Ingeniør og Distriktshøgskole (AID) in Grimstad, Norway with a degree in Mechanical Engineering and Economics. He later undertook post-graduate studies in Industrial Marketing at the University of Linköping, Sweden.

He began his Volvo career in 1992 and has held various positions within Sales, Aftersales and Management in Norway, Sweden, India, Denmark and Australia.

During the last four years, Arne has been responsible for Volvo Group Australia working with the Volvo, Mack, UD and Renault truck brands.
Before his Volvo career Arne worked for several years as a mechanic and as a truck driver.

In his free time Arne enjoys the outdoor life. He owns a small ’hobby’ farm in Norway.