Toyota has just introduced their new RAV4 model range to the European auto press and this mid-generation model range stands out because it marks the introduction of the first hybrid compact SUV to the already highly competitive Irish C-SUV segment. 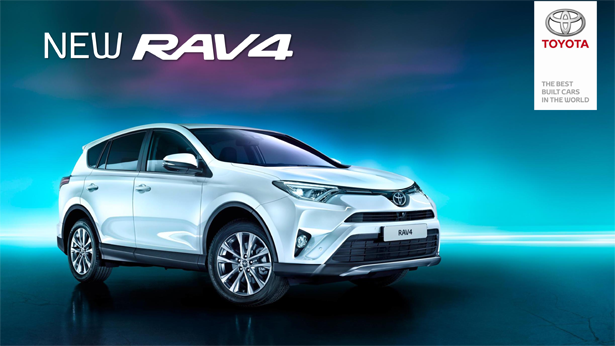 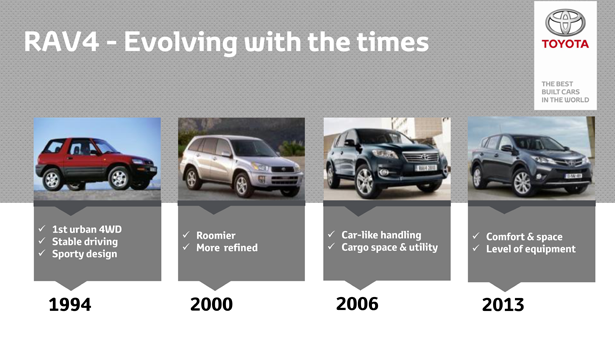 The new RAV4 will be offered in a choice of four specification levels. The entry level ‘Aura’, the big selling ‘Luna’, and the newly introduced ‘Luna Sport’. That leaves the top of the line ‘Sol’ version. Prices for the new RAV4 range start at €29,950 for the front-wheel drive (FWD) Aura 2.0 litre Diesel. The Luna spec version raises that to €31,700 which compares to the new 2.5 litre Hybrid (entry-level) FWD Luna at €37,950. That rises to €40,250 for the four-wheel drive (4WD) Luna Hybrid version. 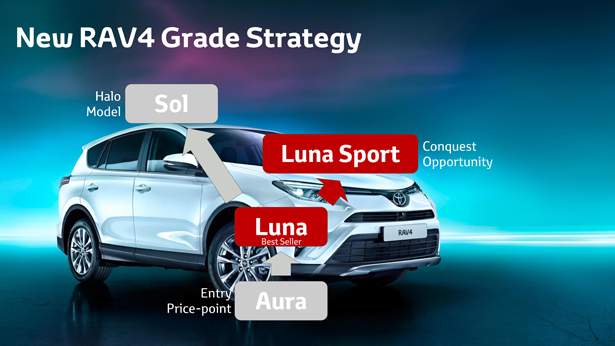 Toyota describe it as the perfect response to the demands of a more mature and sophisticated C-SUV market. However, with a price premium of about €6,250 for the new RAV4 Hybrid in the bigger selling ‘Luna’ grade over a new diesel engined version, it might prove a harder sell than in some tax friendlier other European markets.

In fairness, you also get sequential Shiftmatic (automatic) transmission as standard on the new 2.5 litre petrol Hybrid, as well as ‘Smart Entry’, a power back door, and LED headlamps included over an above the spec on the diesel. However diesel is significantly less expensive than than petrol and the new diesel engine in the RAV4 has a slight economy advantage over the hybrid version according to quoted figures. 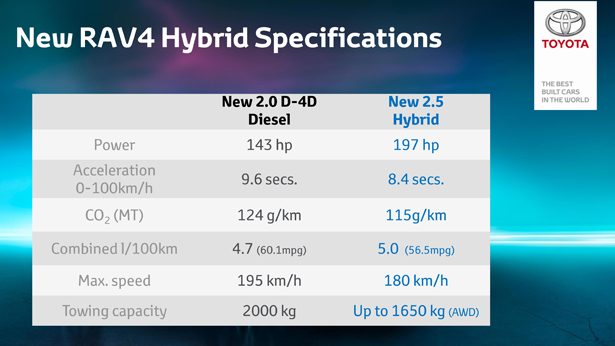 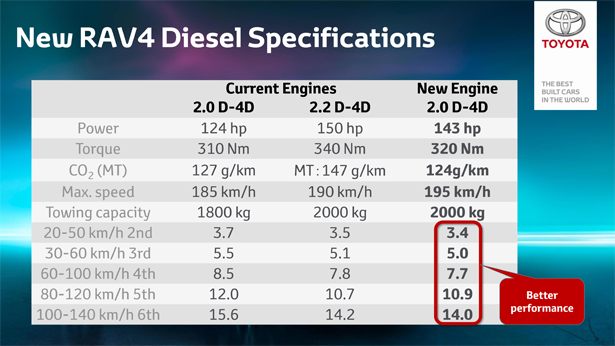 With regards to pedigree in both these areas, Toyota has unparalleled experience gained through over 20 years of innovative in full hybrid powertrain technology, and a similar time developing compact SUVs, so the first such combination deserves our attention.

Indeed, since the European launch of the first Prius in 2000 (which incidentally I also attended), there are now over 1 million Toyota hybrids sold in Europe and 8 million worldwide. There has also been 6 million RAV4s sold globally, of which 1.5 million were in Europe. Of these, an impressive 90 per cent European RAV4s are still on the road today. 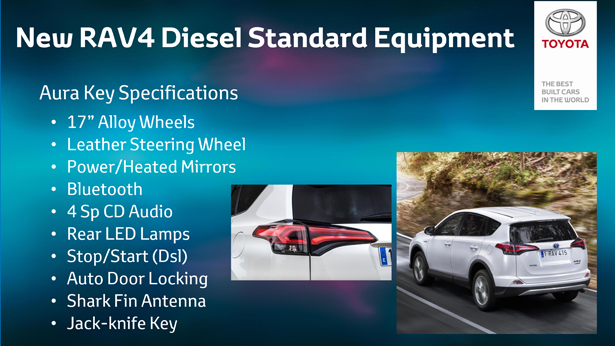 In addition to the refined driving experience offered by Toyota’s hybrid technology (except when accelerated heard and quickly), the new RAV4 further benefits from enhanced ride comfort and driving dynamics. It also has a quieter cabin thanks to better sound insulation.

With some new exterior design changes all around, the front-end in particular looks more dynamic more dynamic. The updated model also sits taller. Toyota points to improved interior sensory quality and functionality, as well a number of latest innovations in safety and advanced technology.

The restyled interior which benefits from the enhanced functionality of a 4.2’’ multi-information display screen and a 7’’ full-colour centre console screen incorporating the Toyota Touch® 2 multimedia system, depending on the level you choose.

The new RAV4 range benefits for numerous measures designed to enhance ride comfort and driver involvement without sacrificing either stability or controllability. This was reflected on a number of varied test routes that we drove over two days.

The new RAV4 Hybrid is available with ‘Toyota Safety Sense’, a newly developed set of active safety technologies designed to help prevent or mitigate collisions across a wide range of traffic situations. 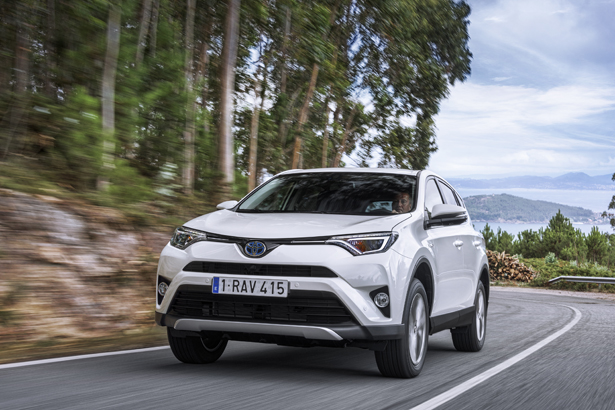 The full hybrid system uses power from both the petrol engine and electric motor in tandem, as well as alone. Toyota says that this is maximising the efficiencies of both units to achieve the optimum balance of driving performance and fuel efficiency.

During deceleration and under braking, the electric motor acts as a high-output generator to effect regenerative braking. Normally wasted as heat, kinetic energy is recovered as electrical energy for storage in the high performance battery.

The RAV4 Hybrid features four ‘on-demand’ drive modes to increase the capabilities of the full hybrid powertrain, including a full hybrid-unique, EV mode which allows for ultra-quiet running on electric motor power alone, resulting in zero consumption and emissions.

The full hybrid powertrain is designed to eliminate the need for the petrol engine as often as possible during city driving. Toyota’s own data show that the cumulative effect of full hybrid operation leads to high proportions of zero-emissions, EV driving. 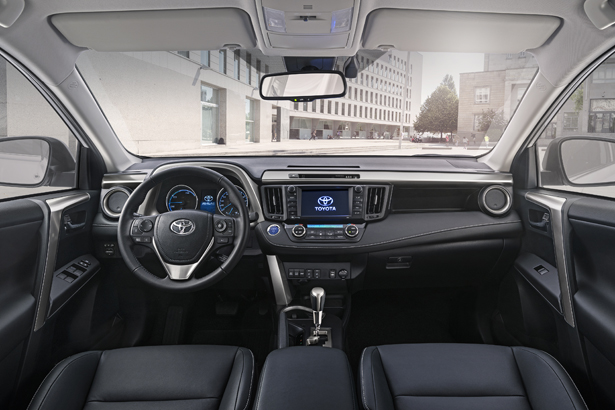 The new Hybrid versions is the unique selling point for the new RAV4, but it is not the only selling point. Toyota points out that everything developed for RAV4’s mid-life update is focused on delivering a greater experience for buyers. It offers more advanced styling, improved quality, and highly advanced innovation, whether it be their hybrid powertrains or new BMW sourced 2.0 litre diesel engine and other additions such as Toyota Safety Sense.

Toyota Ireland expect that 85 per cent of their sales of the new RAV4 will be diesel engined with the new hybrid models accounting for the remaining 15 per cent in the first year. That sounds about right to me. However, Toyota would have strong ambitions to grow sales of the hybrid versions in coming years. 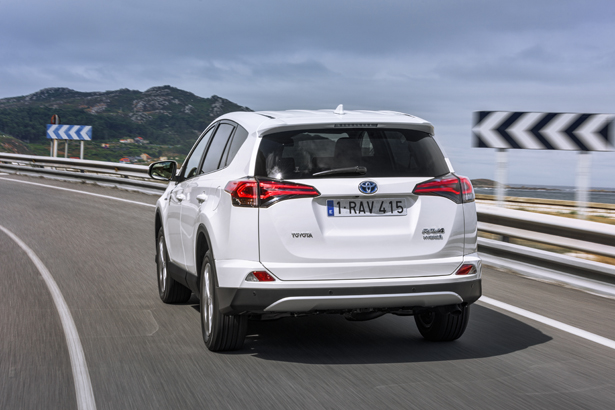