Gabriel from Loughrea, Co. Galway was chosen as the overall competition winner from 17,000 young truck drivers from 24 European countries that were tested on eco-driving, cargo securing, fire and rescue and vehicle checks over a two day period.

The Scania Young European Truck Driver is a major part of a global initiative for responsible, safe driving that Scania started in 2003. By highlighting the role of the driver, Scania also wants to attract more young people into the driving profession. 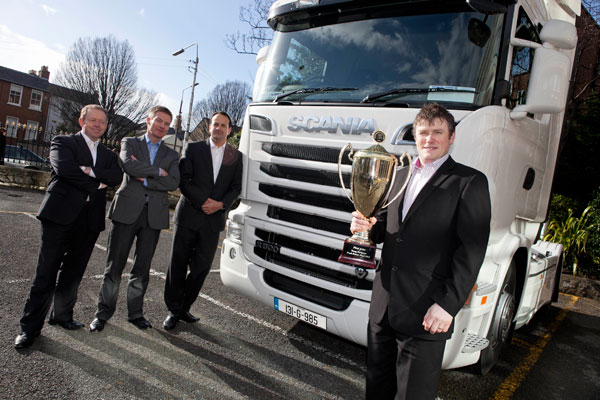 (Back from left) Minister of State for Training and Skills at the Department of Education and Skills,  Ciaran Cannon TD, Joe Crann, Managing Director, Westward Scania,  Minister for Minister of Transport, Tourism and Sport, Leo Varadkar and (front) Gabriel Warde.

Presenting the award to Gabriel, Minister for Transport, Tourism & Sport Leo Varadkar highlighted the importance of road safety for truck drivers. “Congratulations to Gabriel for coming first out of 17,000 drivers from 24 European countries. He was the overall winner from a tough two-day series of tests on cargo securing, fire and rescue, eco-driving and vehicle checks. Safety is of paramount importance for hauliers, and in winning this award Gabriel has shown that Irish HGV operators have the capacity to achieve the highest of standards.”

Speaking at the handover, Joe Crann, Managing Director, Westward Scania, commented, “We are thrilled that the winner of the Scania Young Truck Driver Competition was an Irishman. We were confident that Gabriel was the number one driver when we brought him to Sweden for the competition. He kept a cool head throughout all the different stages and his hard work paid off in the end.”

Scania’s Young European Truck Driver competition has the endorsement of the European Commission and the International Road Transport Union. Its sponsors are Michelin and Volkswagen. Scania also runs similar competitions in Latin America, Africa and Asia. The 2012 competitions attracted a record number of some 70,000 contestants worldwide.

The complete list of results from the European finals can be viewed by logging onto www.scania.com/yetd