The all-new Mini Clubvan with five doors has just gone on sale here. It is the first new MINI to be classed as a commercial vehicle. Mini Ireland will only market Cooper D Clubvan here with an entry level price of €20,800 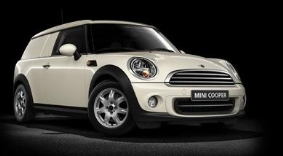 And the Mini Clubvan has just picked up its first accolade after winning the Editor’s Choice award at the 2013 What Van? Awards in the UK.

Commended for delivering style, efficiency and class-leading driving dynamics not usually found in light commercial vehicles, the Clubvan has already made a big impression on industry experts just months after its initial unveiling at Goodwood Festival of Speed in the UK earlier this year.

“The arrival of the Mini Clubvan is the most exciting and charismatic entrance into the light commercial vehicle arena for many years, offering small businesses in particular the opportunity to run a vehicle that combines workman-like light van practicality with a style not currently available, and that’s without mentioning Mini’s unrivalled driving pleasure and good fuel efficiency,” said What Van? Editor Paul Barker. “It’s fair to say we’re looking forward to the Clubvan’s arrival, and it will offer small van users something unique and appealing.”

Combining both the practicality of a 860-litre load cubic capacity and load capacity of 500 kg.

with premium features already familiar to existing Mini customers, the new Clubvan offers commercial customers both style and substance on the road.

The new Clubvan is being built in Britain at Mini Plant at Oxford. It is the first commercial vehicle to be offered since the MINI brand was relaunched under BMW’s ownership in 2001. Because of that classification the model qualifies for a single commercial VRT payment of €200, which is includ ed in the price, as is VAT.

The Clubvan is the seventh unique member of the MINI family, selling alongside the Clubman, Hatch, Convertible, Countryman, Coupe and Roadster.

The newcomer’s heritage can be traced back to 1960, when the original Mini whic

h was launched a year earlier was joined in showrooms by the Morris Mini Van. With an extra 10 cm in the wheelbase, closed-off load compartment and split rear door, it offered exactly the sort of workhorse capability that urban commercial users of the time required. 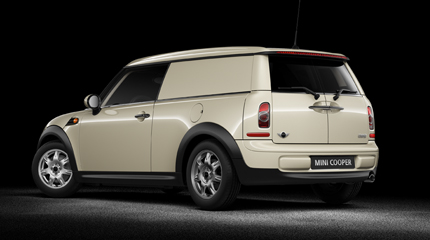 The new Clubvan is bringing that tradition of MINI practicality right up to date, while adding the brand’s modern values of outstanding driving performance, high standard specification and exceptional style. The Clubvan comes with much higher specification than any comparable van in the segment with items such as DAB radio, air-conditioning, electric windows, anti-theft alarm and side and head airbags included as standard.

The MINI Clubvan is available in four exterior colours – Pepper White, Ice Blue, British Racing Green metallic and Midnight Black metallic. The roof, rear side window area, C-pillars and exterior mirror caps are body-coloured on all versions. The standard 15-inch Delta-spoke alloy wheels, which are exclusive to the MINI Clubvan, can be replaced by alternative 15, 16 or 17-inch alloy wheel designs.

Inside, black seats with Cosmos fabric upholstery, a black interior colour scheme and Fine White Silver trim strips are standard. The specification has been carefully considered to be in keeping with the functional and practical character of the vehicle. However, the interior can be customised to suit individual requirements. Options include black sports seats, which are available in Ray Leather, Punch Leather or Lounge Leather.

Like every other MINI, the Clubvan can be personalised from the brand’s extensive range of optional extras. These enhance comfort, convenience, driving enjoyment, safety and practicality. Expected to prove popular are xenon headlights, black headlight shells, adaptive headlights, automatic climate control, park distance control, automatically dimming interior and exterior mirrors and a trailer hitch. The optional MINI navigation system, to keeps the Clubvan heading in the right direction on its delivery runs, is a further useful option.

The MINI Clubvan brings a new blend of sophistication and style to the business sector. Its blend of practicality and premium features means commercial customers could include caterers, event planners, small retail businesses or photographers. However, it will also appeal to some drivers with outdoor-based adventure hobbies such as cycling or mountaineering, where high-value equipment needs to be kept secure.

Finally, the new Mini Clubman certainly delivers on many levels such as style, price, access and functionality, running costs, etc. and it has also just delivered its first award.