Paul Philpott, former Chief Operating Officer at Kia Motors Europe has taken up his new role as the first non-Korean President and CEO at any Kia subsidiary in Europe.

Philpott, 45, was Managing Director at Kia Motors (UK) Limited from 2007 until he moved to Frankfurt in 2009 and returns to the Weybridge base to head up the UK and Ireland operations.

The move comes as part of Kia’s plan to strengthen its global representation and management in individual markets to further develop the brand’s global activities. 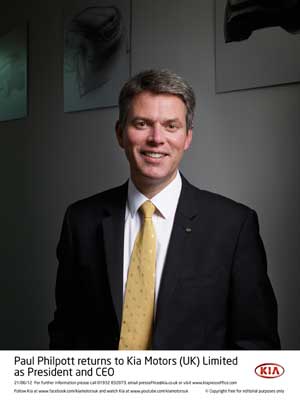 During his time at Kia Motors Europe Philpott has led the company through a period of significant expansion and the launch of the innovative and still industry-leading seven year warranty as well as a product blitz covering most of the new car market’s main sectors that has seen Kia establish itself as Europe’s fastest growing car brand.

Announcing the move, Brandon Yea, President of Kia Motors Europe. said: “The Kia brand is now Europe’s fastest growing thanks to Paul Philpott and he knows very well that we are determined to strengthen local management at all our subsidiary companies in order to become a truly global automotive organisation.

“Paul brings specific local expertise to a role that we have previously filled from headquarters in Korea and this is the right time – in our best performing market in Europe – to change our strategic focus,” he concluded.

Philpott said: “I am truly excited by the task I have been asked to undertake and am very happy to be moving back and to have the chance to work again with an excellent team and some of the best dealers in Europe. With Michael Cole and everyone at Weybridge I look forward to taking Kia right into the top rank of quality volume manufacturers in the UK and helping to ensure our dealers and customers will have an ever-improving experience with Kia.

“Kia’s new product pace just doesn’t let up and in just over a year we have introduced all-new versions of the Picanto, Rio and our European-designed and engineered cee’d plus the larger Optima saloon – and we have even more to come during the next 12 months so this is a very important time to build on the growth we have delivered and strengthen our position in the increasingly competitive mainstream market,” he added.

Michael Cole, Kia Motors (UK) Limited Managing Director commented: “Having worked with Paul in the past at Toyota and having succeeded him in this role in the UK I am delighted that he has come back to help us continue the major task of taking Kia to our longer-term vision of 100,000 sales per year in the UK. Paul’s understanding of the relationship between manufacturer and dealer network is unrivalled and his efforts to construct a strong, aspirational and attractive business proposition for our partners can only contribute positively to the remarkable growth we have enjoyed in the UK.

“I know that all of our staff and every one of our dealers in the UK and Ireland are delighted to see him back here and I am certain that his knowledge and skills will take us to new heights in the UK new car market,” he added.

Married with two children, Philpott graduated in Finance at Loughborough University, and spent 12 months in the financial sector before joining Ford Motor Company in 1988. After nine years in Ford’s UK Sales and Marketing Division, he moved to Toyota as General Manager, Marketing.
Philpott was appointed Marketing Director in 1999 and in 2003 became Commercial Director with responsibility for all of Toyota’s commercial operations in the UK – sales, marketing, aftersales and logistics before moving to Kia.