The new Audi A8, when it arrives on the market later this year features the brand’s (Aluminium Space Frame) ASF design. 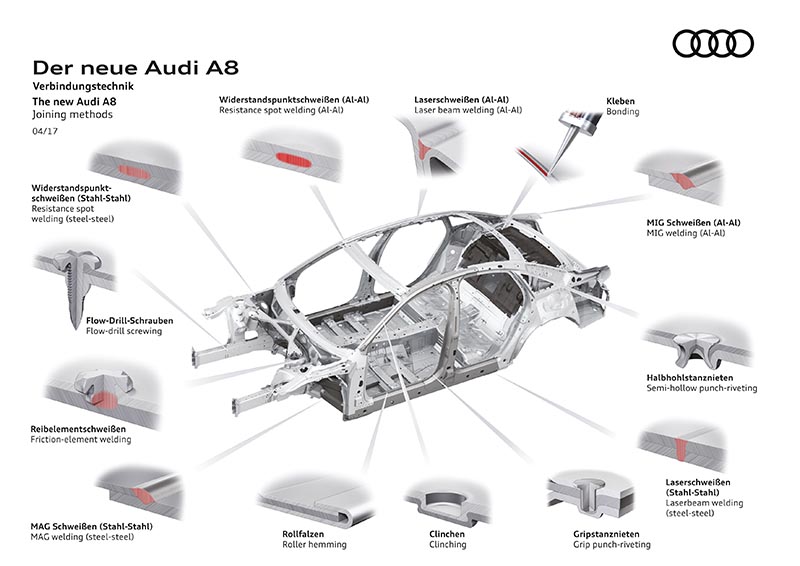 When it introduced the first A8 in 1994, Audi had not only developed the radically new (Aluminium Space Frame) ASF design and put it into series production, it had also developed all of the steps required for its production.

The launch was preceded by a development process lasting 12 years. Since this time Audi has built on its competitive edge step by step. The arc spans three generations of the A8 and also includes the A2 along with its legendary three-litre
version, the A2 1.2 TDI. By the end of 2010 alone, the company had produced some 550,000 vehicles with the ASF body – far more than any other manufacturer in the world.

In the current model line-up, the A8 luxury saloon and the R8 high-performance sports car represent the ASF principle in its purest form. The body of the TT compact sports car is based on a hybrid aluminum and steel construction, and the A7 Sportback and the new A6 (Combined fuel consumption in l/100 km: 9.6 – 4.4; Combined CO₂-emissions in g/km: 225 – 114) have steel bodies with a large fraction of aluminum.

The basic structure of the Audi Space Frame (ASF) resembles a skeleton or the framework of a timbered building. What makes the space frame principle so impressively elegant from a technical perspective is that it separates the tasks of the various components of the body. The extruded sections bridge spaces, the cast nodes connect the components, the aluminum panels close off the spaces and lend rigidity to the framework. The space frame principle assigns a specific task to each material and each component. This gives the development engineers a great deal of design freedom.

An ASF body weighs over 40 percent less than a comparable steel construction. The body of the TT Coupé tips the scales at just 206 kilograms (454.15 lb). The body of the R8 Coupé weighs 210 kilograms (462.97 lb) and that of the A8 weighs 231 kilograms (509.27 lb). Elsewhere in the auto industry vehicles are steadily becoming heavier and heavier. But Audi is reversing the “spiral of weight.” The second generation of the TT weighs up to 90 kilograms (198.42 lb) less than its predecessor. With the A6, the difference can be as much as 80 kilograms (176.37 lb), depending on the model. s

The lightweight ASF body brings with it an array of secondary effects throughout the rest of the car. A lower body weight enables the use of more compact brakes, a smaller engine, a correspondingly trim exhaust system and a smaller fuel tank. The individual components also harbor a lot of potential for saving weight.

The architecture of Audi’s ASF bodies differs widely among the various model series. The handcrafted superstructure of the R8 high-performance sports car makes extensive use of extruded sections, which account for 70 percent of the semi-finished components. In the TT Coupé, however, panels make up 45 percent and thus the largest fraction of the aluminum used. Finally, large multifunctional castings play a decisive role in the structure of the A8, accounting for 35 percent of the weight.

The ASF bodies from Audi are impressive by any criterion, be it torsional stiffness, crash safety or vibration behavior. Audi is continually refining them. In the A8, for example, the lightweight quality – the relationship between weight, torsional stiffness and size of the body structure – has improved