The second generation of the Audi A3 Saloon will go on sale here in the autumn. Audi says that the compact four-door model is more elegant and sporty, while it is also digitally and fully connected, from the infotainment through to the assist systems. 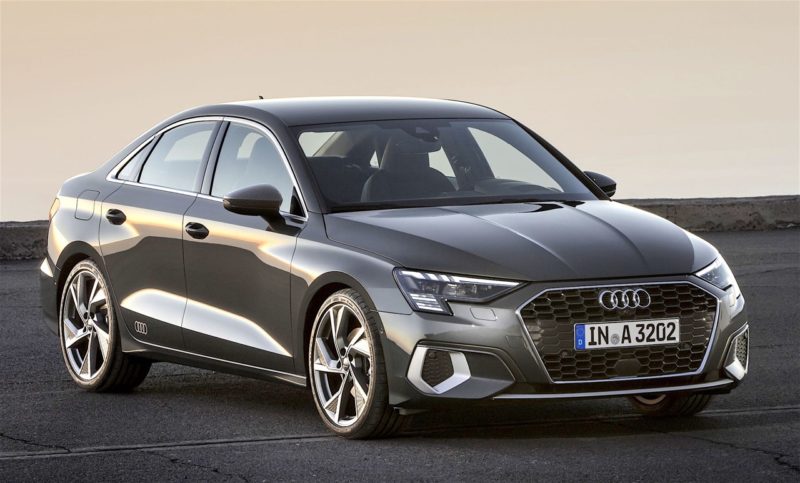 Compared with its predecessor, it is now 4 centimetres longer, while its wheelbase remains unchanged. Its width has increased by 2 centimetres to 1.82 metres and it is now one centimetre taller at 1.43 metres. Audi say that this has yielded an increase in headroom, a good two centimetres in the front thanks to the lower position of the driver seat, and also some additional elbow room. The luggage capacity is similar to the predecessor model.

Audi says that new drives and refined suspension tuning ensure a driving experience that is as efficient as it is dynamic.  It adds that the new A3 Saloon will be available with a choice of two TFSI engines and one TDI engine at launch, high efficiency being a common theme across both. The 35 TFSI, a 1.5-litre direct injection engine, produces 150 PS and is available in two versions, with what it describes as a newly developed six-speed manual transmission and with a quick-shifting seven-speed S tronic.

Besides the cylinder on demand technology, the German carmaker says that the powertrain in conjunction with the S tronic dual-clutch transmission uses a 48-volt mild hybrid system. It recovers energy during deceleration, supports the engine with up to 50 Nm of torque when driving off and accelerating from low engine speeds and allows the A3 Saloon to coast with the engine switched off in many situations. In everyday driving, Audi claims that it reduces consumption by up to 0.4 litres per 100 kilometres.

The front styling of the new A3 Saloon is dominated by a large singleframe honeycomb grille that is flanked by striking headlights. In contrast to the A3 Sportback, the body line on the Saloon, by contrast, extends up to the rear bumper. This emphasises its length, 15 centimetres longer than the Sportback and it also gives the flank a more elegant appearance. The roof line slopes down from the B-pillar dynamically just like on a coupé – and finishes in a striking spoiler on the tailgate, which Audi says is optionally available in carbon.

Audi points us to the cockpit being entirely focused on the driver, beginning with the interior design and ending with the display and control elements. Thus, the instrument panel with the central MMI touch display is inclined slightly toward the driver. It has a 10.1-inch diagonal and Audi claims it is intuitive to operate. The instrument cluster behind the steering wheel is also digital even in the basic model.

The top (not standard) infotainment system in the new car is the MMI Navigation plus, which uses the third-generation modular infotainment platform (MIB 3). The MIB 3 boasts computing power ten times higher than in the predecessor model, connects the car via LTE Advanced speed, and connects the smartphones of the passengers to the Internet via Wi-Fi hotspot.

The MMI Navigation plus offers a multitude of Audi connect services as standard, including online traffic information, news, and additional information such as photos, opening times, and user reviews relating to points of interest.

Pricing for the A3 Saloon in Ireland is expected to be unveiled during this summer, with availability from the autumn.