Mercedes-Benz has won three categories in the “World Car Awards 2015”. The C-Class, which won the World Car of the Year 2015 Award, came through from a shortlist that included the Volkswagen Passat and the Ford Mustang.

The S-Class Coupé was voted “World Luxury Car 2015” from a shortlist of three that was also made up of the BMW i8 and the Range Rover (Autobiography Black LWB). 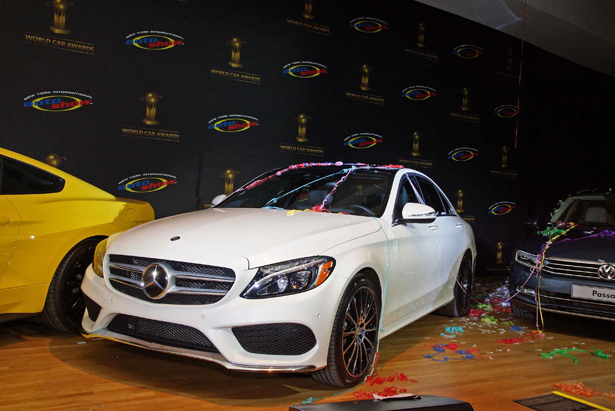 Completing a big hat-trick for Mercedes-Benz was the AMG GT sports car picked up the award for “World Performance Car 2015” from the other two shortlisted rivals, the BMW M4 Coupe/M3 Sedan and the Jaguar F-Type R Coupe.

The BMW i8 was declared the 2015 World Green Car ahead of the other two shortlisted candidates – the Mercedes-Benz S 500 Plug-In Hybrid and the Volkswagen Golf GTE.

Finally, The Citroen C4 Cactus was declared the 2015 World Car Design of the Year. The short-list of three finalists also included the Mercedes-Benz C-Class and the Volvo XC90.

Mercedes-Benz was the only automobile manufacturer to make it into the final round of the awards with five vehicles. This commanding performance is unprecedented in the 11-year history of the “World Car of the Year” awards. The international jury for these prestigious awards is made up of 75 renowned automotive journalists, including Eddie Cunningham representing Ireland.

Christoph Horn, Head of Global Communication Passenger Cars Mercedes-Benz and Rob Moran, Director Mercedes-Benz USA Communications, received the awards on behalf of the brand with the three pointed star at a ceremony held on the occasion of the New York International Auto Show.

Mercedes-Benz has found favour with the jury in previous years too: in 2014 the S-Class won the category “World Luxury Car”. In 2012 the S 250 CDI BlueEFFICIENCY was the winner in the category “World Green Car”, while the same award was taken back in 2007 by the E 320 BlueTEC.

In the 11 years of the World Car Awards, eight World Car of the Year winners have been German and the remaining three have been Japanese.