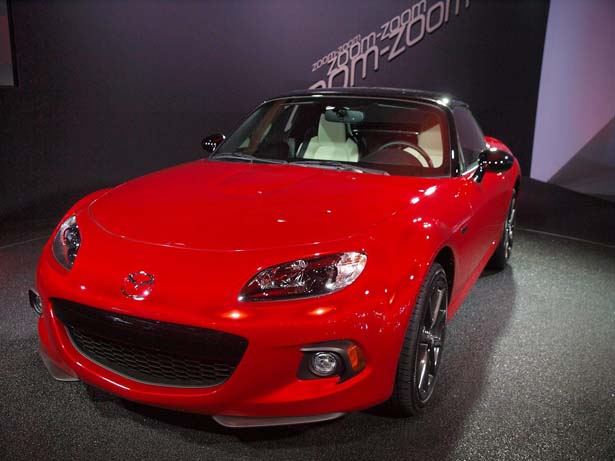 The special edition model was created to celebrate 25 years since the launch of Mazda’s iconic roadster, the Mazda MX-5, at the Chicago Auto Show in the USA. The Japanese automaker also revealed a newly-developed SkyActiv-chassis that will form the basis of the next generation all-new Mazda MX-5.

Over more than two decades, the MX-5 has come to symbolise Mazda’s car-making philosophy and the Japanese brand’s tireless pursuit of driving pleasure. Since its launch in 1989, the Mazda MX-5 has consistently offered the kind of fun that only a lightweight sportscar can deliver, and has won a huge variety of fans from different countries, cultures and age groups.

More than 940,000 units have been produced so far (to end March 2014) and the model continues to hold the Guinness World Record for the best-selling two-seater sportscar.

The Mazda MX-5 25th Anniversary Edition is a special edition model that brings together 25 years’ worth of fun shared with fans. Based on the 2.0-litre 160PS Roadster Coupe model with power retractable hard top and either a 6-speed manual or automatic transmission, it will be available exclusively in Soul Red Metallic.