Earlier this month, Kia Motors has unveiled its latest models at the Geneva Motor Show. Taking centre stage were the new Kia Ceed and Ceed Sportswagon make their world debuts, alongside the upgraded Optima range, and new Rio GT Line.

Kia says that the third-generation Ceed and Ceed Sportswagon are designed, developed, engineered and built in Europe. Available later this year as a five-door hatchback and Sportswagon, the new Ceed model family strengthens Kia’s presence in the European C-segment with innovative new technologies, a mature and athletic design, and a more engaging drive.

Since the first-generation Kia cee’d started production in Slovakia in December 2006, more than 1.28 million units have been built. A new naming format – cee’d becomes Ceed – consolidates its reputation as a car for the Community of Europe, with European Design. More than 640,000 units of the second-generation model have been built since 2012. In its third iteration, the new Ceed will account for an even greater proportion of Kia’s European sales – up from 15% in 2017.

The new Ceed is lower and wider than its predecessor, and boasts a striking, contemporary new design. Standard ‘ice cube’ LED daytime running lights echo the appearance of earlier Ceed GT and GT Line models. In profile, the sharp, straight lines visually lengthen the bonnet and give the car a more upright stance. At the rear, new LED daytime running lights give the Ceed greater visibility – and recognition – on the road. Straight lines in the bodywork and a subtle rear boot spoiler add stability to the Ceed’s overall presence.

The Ceed Sportswagon’s tourer shape ensures cargo capacity grows to 600 litres, more than many D-segment tourers. The Ceed is also among the most practical C-segment hatchbacks, offering 395 litres of cargo space. 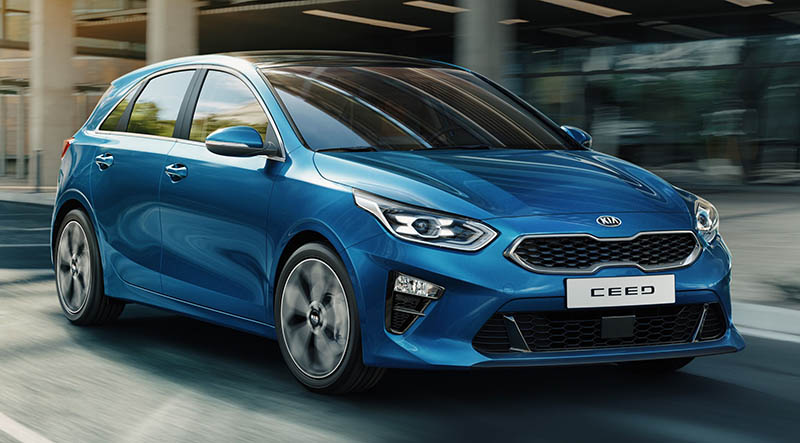 A Drive Mode Select system enables owners to tailor engine and steering characteristics with Normal or Sport modes. Every engine is paired with a six-speed manual transmission, while 1.4-litre T-GDi and 1.6-litre CRDi engines are also available with Kia’s seven-speed double-clutch transmission.

The Ceed is available with Kia’s latest Advanced Driver Assistance Systems (ADAS) including a new Driver Attention Warning (DAW) system which combats distracted or drowsy driving by monitoring a number of inputs from the vehicle and driver. Other ADAS features include High Beam Assist, Lane Keeping Assist and Forward Collision Warning with Forward Collision-Avoidance Assist.

The new Ceed hatchback will go on sale across Europe in the late summer, while the Sportswagon models will be available before the year-end. Both models will continue to offer Kia’s unique 7-Year, 150,000 km warranty.

Finally, Kia also showed the latest Optima with updated interior and exterior design and new powertrains. The upgraded Optima sedan and Sportswagon will be available here from late this year.