Citroën Motors Ireland has delivered a DS5 Hybrid 4 to the Embassy of France in Ireland. The DS5 will be one of the official Embassy cars used by the French Ambassador to Ireland H.E. Emmanuelle d’Achon.

The Citroën DS5 Hybrid4 has already received the presidential seal of approval with French President François Hollande choosing the DS5 Hybrid 4 as his official car to parade down the Champs-Elysées for his inauguration on the 15 of May 2012.

With the increased focus on low CO2 emissions in the 2012 budget, the Embassy of France in Ireland will be leading the way in green motoring with the choice of the world’s first diesel hybrid engine. With emissions from only 102g CO2 the DS5 Hybrid4 DSport qualifies for tax band A3 making it an environmentally friendly premium choice.

Speaking at the delivery of the DS5, Fredéric Soulier, Managing Director of Citroën Motors Ireland, commented; “It gives me great pleasure to hand over the keys of the Citroën DS5 Hybrid to H.E. Emmanuelle d’Achon today and we hope that the car will be a welcome addition to the Ambassador’s transport fleet.” 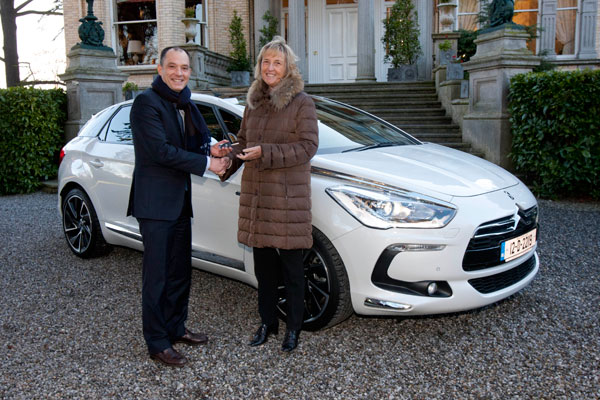