Ford’s all-new EcoSport SUV offers drivers the perfect combination of small car agility, affordability and fuel efficiency, with the flexibility and spaciousness customers expect from a SUV – in one stylish and connected package. 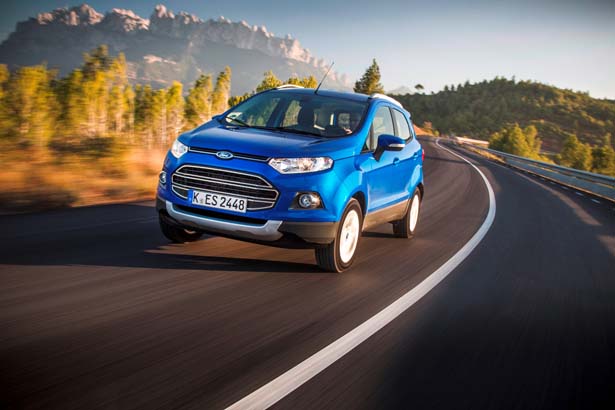 The stylish and rugged all-new EcoSport is the first SUV in the world to offer a 1.0-litre engine and is among the first Ford vehicles in Europe to be offered with Ford SYNC with AppLink, enabling drivers to voice-control smartphone apps while keeping their eyes on the road and their hands on the wheel.

EcoSport is the first Ford global model to be developed entirely in South America. First introduced in 2003, Ford created the segment in Brazil and has since sold more than 770,000 of the first EcoSport models in the region. Ford engineers and designers from more than 16 countries worked together to develop the all-new EcoSport that is launched amid increasing demand for SUVs in Europe. Ford projects that between 2013 and 2018, sales of all SUVs in Europe will increase by 22 per cent, and sales of small SUVs – like EcoSport – will increase by 90 per cent.

The full-sized spare wheel mounted on the tailgate ensures the EcoSport’s load capacity rivals that of many medium-sized family cars with up to 375 litres available when the rear seats are in place, depending on the rake of the seats. The EcoSport also delivers a commanding driving position with the driver’s seat height adjustable and the steering column adjustable for both reach and rake.

All-new EcoSport is offered with the highly-acclaimed turbocharged 1.0-litre EcoBoost petrol engine – 2013 and 2012 International Engine of the Year – to deliver performance to rival a traditional 1.6-litre engine, but with significantly better fuel efficiency and lower CO2 emissions.

The steering and handling of the all-new EcoSport offers the same Ford fun-to-drive DNA that has received acclaim in the new Fiesta.

The Ford SYNC in-car connectivity system will enable owners to voice-activate phone calls and select music from devices connected via Bluetooth or USB.

Ford SYNC with AppLink will enable EcoSport owners to be among the first Ford drivers to voice-activate apps, including leading music streaming service Spotify; the TomTom turn by turn navigation service with audible instructions and on-screen mapping; and Hotels.com that  enables booking of rooms in 145,000 hotels in 19,000 destinations worldwide.

EcoSport line up for Ireland

The EcoSport series and powertrain details for Ireland are as follows:

The car will be priced from €23,995 – more complete details on spec and pricing will be issued at the time of the official launch of EcoSport in Ireland.