The Fitzpatrick Garage Group has been appointed as authorised main dealers for the Mercedes-Benz range of passenger cars.

The appointment, which has immediate effect, will see Fitzpatrick begin operation as main retail sales and after-sales service dealers for the luxury German carmaker. The business will be based in new showrooms dedicated to Mercedes-Benz located adjacent to their existing premises at Dublin Road in Kildare Town. 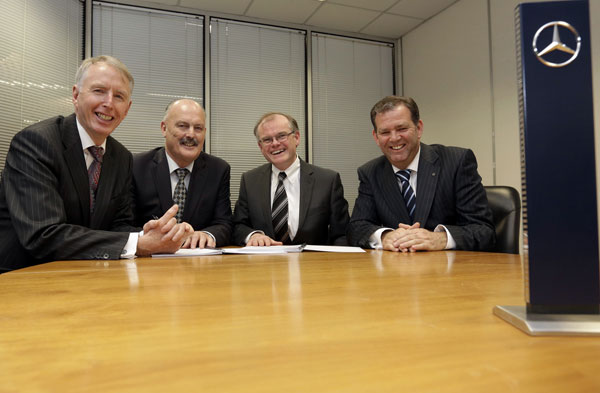 Established in 1951, the Fitzpatrick Garage Group has grown to become one of the largest and most successful motor retailing organisations in Ireland with dealerships situated in Kildare, Naas, Carlow and Tullamore. Founded by Jimmy Fitzpatrick, the group is now managed by his nephew, managing director Andy Fitzpatrick.

In becoming main dealers for Mercedes-Benz, the appointment rekindles a relationship that existed between the two organisations at a very early point in the Fitzpatrick Garage Group’s history as motor dealers in Kildare when, along with a selection of other brands, the company had the distinction of representing the luxury car maker.

In rejoining the Mercedes-Benz fold, the Kildare dealership takes on the franchise at a time that many might argue is the most exciting in the Stuttgart manufacturer’s 126 years history. Evidence of this can be found in the success that cars with the three-pointed star are achieving in markets, here and across the world, and in the increasing number and pace at which new models are being introduced.

Latest model introductions that will feature strongly in the dealership’s plans for 2013 will be the much-publicised and eagerly awaited new A-Class – a model designed for what might be termed ‘the iPad generation’ which Mercedes-Benz believes will help them access a new, younger generation of motorists. Another newcomer on Fitzpatrick’s forecourt will be the glamorous and elegant CLS Shooting Brake – a model that brings estate car capacity and features to their already iconic CLS Coupé – and their impressive new diesel-powered E-Class Hybrid.

To underline the significance of their appointment and the role which Fitzpatricks hope to play in the future success of Mercedes-Benz in Ireland, their managing director Andy Fitzpatrick said that ‘joining the Mercedes-Benz network gives us the feeling of coming home again to a franchise that we were proud to represent during the first 25 years of our history.

Responding, Mercedes-Benz chief executive in Ireland, Stephen Byrne said that ‘thanks to our rapidly expanding model range, Mercedes-Benz has ambitious growth plans that we are confident the appointment of Fitzpatrick Garage Group, with their presence in the highly populated and affluent Kildare area, will help us to achieve.’