A field of 35 candidates went to post for the Continental Irish Car of the Year 2013 awards. After round one voting, the Irish Motoring Writers Association (IMWA) has just announced the shortlist in alphabetical order: 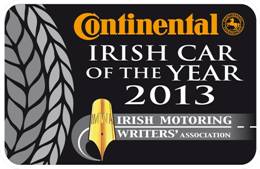 The 28 voting members of the Irish Motoring Writers’ Association assess each vehicle, attributing points on the basis of criteria ranging from innovation and safety, to space, comfort, build quality, driving quality and value for money.

“In spite of the weak car market in Ireland, this year’s shortlist includes a nice mix of interesting and exciting new concepts and revisions of old nameplates,” said Paddy Murphy of Continental Tyres Ireland.

Gerry Murphy, Chairman of the IMWA, said: “the task now for the IMWA voting members is to re-test each car at our ‘Refresher’ day drive event and over the coming weeks before the final deadline for submission of votes”.

Last year the Continental Irish Car of the Year title went to the Kia Rio while the van accolade was won by the Volkswagen Crafter.