In units sold, of the Top 3 market leaders have shown the following increases so far this year. Toyota has sold 941 more than in January 2013, Volkswagen 536 more, and Hyundai 800 more.

Volkswagen in common with some others has suffered delivery delays on some models such as their Polo and Nissan’s position will change this month too when full consignments of new Qashqai start to flow.

Some including a number that have outpaced the market, are now caught a bit short on some models stocks – victims of their own success. 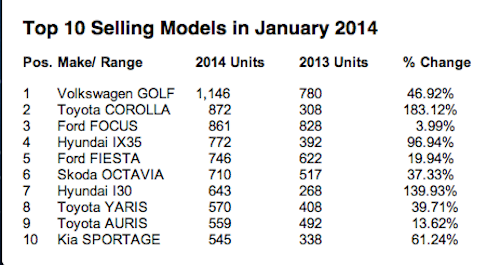 Of those in the top 10, Audi looks the most disappointing performance with no obvious reason other than possibly a lot of nearly new pre-reg. cars in the system. Audi finished the year in 8th. position last year, but has dropped to 10th. for January 2014.

Further down the line the stat that stands out is the Dacia one – 519 sold this January compared to their first January (2013) on the market with just 89 sales. That’s a whopping 483.15% increase that takes it up in to 14th. position in the Irish market

For Toyota, Corolla, Yaris and Auris are in the Top 10 model sales for January 2014. Hyundai have the iX35 and i30 and Ford are represented by the Focus and Fiesta in the Top 10 chart for the month. Volkswagen have the Golf in top position, and Skoda has the Octavia in there too, with Kia in tenth position with the Sportage

However, I’m sure some manufacturers/distributors would say that this is a marathon, not a sprint, and they would be right. But its a very interesting sprint.

My position has always been that we will have a good idea of where the market is and who is doing well or not, by March 11th, after the that month’s 10 days figures are available and those of the cumulative sale to date at that point.

The used car market is just as buoyant.Motorcheck.ie reports that a shortage in 3-5 year old Irish registered cars on sale continues to contribute to the growth in used car imports, which are up 39% (4,857 units) over January 2013 (3,492 units). A note of caution must be sounded however, as Motorcheck.ie warned that it has seen an increase in the numbers of clocked and written off vehicles in circulation as unscrupulous individuals take advantage of stock shortages. “Consumers considering the purchase of a used car need to protect themselves from clocking, badly repaired write-offs and vehicles under finance and ought to carry out an online car check before parting with their money,” Michael Rochford, Managing Director at Motorcheck.ie commented.

Alan Nolan, SIMI Director General commented on the figures: “It was clear in December that there was a strong demand for new 141 cars with dealers reporting far better levels of activity in the lead-up to January. Feedback from dealers suggests that consumer interest is continuing with a noticeable increase in showroom footfall and there certainly is a sense of optimism in dealerships that hasn’t been apparent for many years.”

“There may have been some built-up demand from last year and the earlier Budget may also have helped people to make the decision to buy. There is also a greater availability of affordable finance and an overall improvement in the confidence among Irish consumers.”

“It is very early days so we are still cautious in relation to where the market might end up this year but there is a strong sense that we’re now above the bottom and beginning to move upwards. It’s nice to be able to say that for the first time since 2008.”