This month is forecast to see a record number of MOT failures in the UK as up to 609,000 additional vehicles are due their first inspection. Yet over half could fail for easily avoided reasons according to new research. This will especially interest our Northern readers. 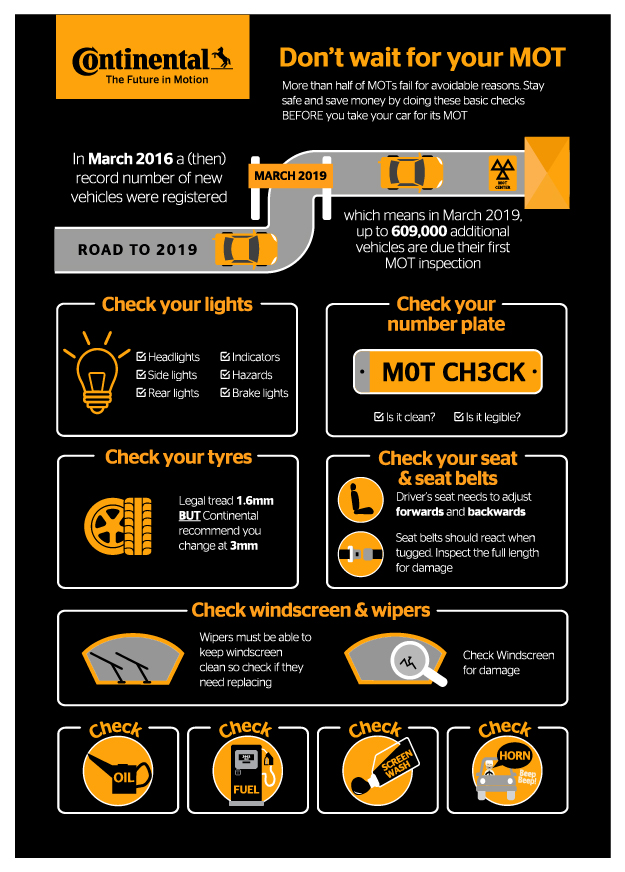 With more cars than ever on the road, faulty bulbs, worn brakes, and inadequate tyre tread depth will account for 57 per cent of the failures recorded in MOTs.

Analysis of nearly 90 million MOT reports by Continental Tyres covering three years revealed the news to dismay drivers. Most of the 609,000 vehicles registered in March 2016 now need to be formally inspected for the first time to stay on the road.

The detailed study is the first time any organisation has analysed previously unpublished government data to reveal the scale of avoidable risk and cost.

Nearly one in five of all drivers will face an MOT in March as around 20 per cent of vehicle registrations are made in the month – making it the most popular month by far for the test of roadworthiness. 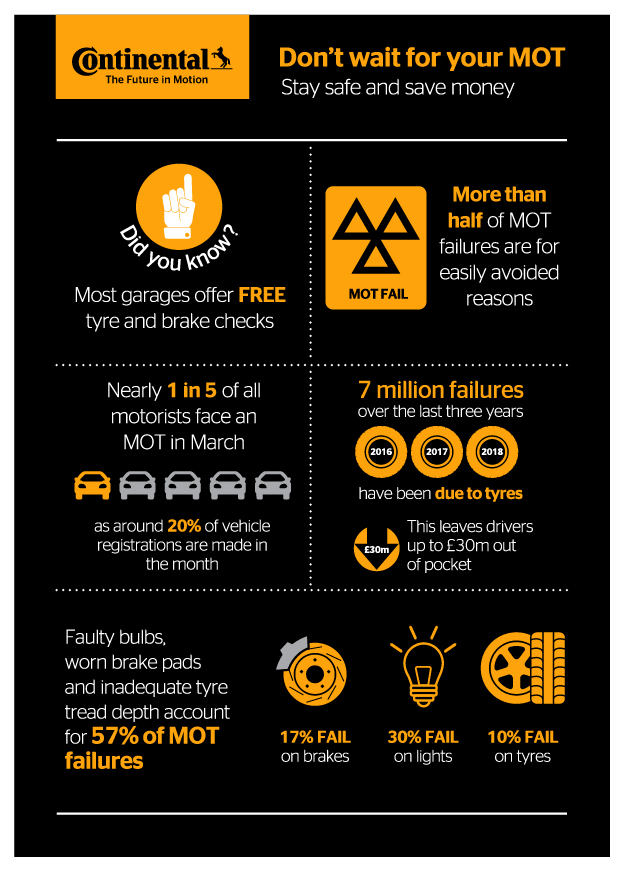 Safety experts at the tyre and automotive technology business have shared how simple checks can eliminate major safety risks, and will save motorists both time and money.

As well as having the hassle of an MOT re-test, car owners face extra costs as most will settle for the tyres and components offered rather than shopping around for the right product at the best price.

On tyres alone, this leaves drivers up to £30m out of pocket from seven million failures due to tyres in the last three years as part of the compulsory safety check.

Mark Griffiths, safety spokesman at Continental Tyres said: “It is crucial that motorists understand the seriousness of driving with worn brakes or tyres given the impact it has on the safety of everyone on the road.

“Tyres are the vital connection to the road on all four corners, and as the leading advocate of road safety we want to make people aware of how they can save time and money through quick, simple checks.”

Griffiths added: “As well as analysing the data from the last three years we have the insight from one in three new cars in Europe being delivered with Continental tyres – so supporting manufacturers as well as consumers is what we do.”

There is a record 39 million motorbikes, cars, van, buses and trucks in the UK.

Checking all lights and tyres can be done in a couple of minutes and many vehicles now have a warning light to indicate worn brake pads. Most garages offer free brake and tyre checks to support safe motoring.

One in three cars will fail due to a problem with lights, brakes or tyres – sometime more than one problem. As three of the four most common reasons for not passing the test, each of the easily identified faults can be resolved before the compulsory annual safety check.

Researchers examined records covering every postcode and identified that 30% of MOT failures were for lights, 17 per cent for brakes and 10 per cent for tyres.

The legal minimum tread depth is 1.6mm, though recognising the deterioration in braking performance, the automotive business recommends replacing tyres when the tread depth is 3mm.

As part of the campaign, Continental has launched a series of videos that remind motorists of the vital role they have in basic vehicle maintenance – supporting their own safety and that of all road users.