Ford Motor Company today announced that the all-new Ford Mustang will deliver 0-100 km/h acceleration in under 5 seconds – making it the fastest accelerating high-volume Ford model ever offered in Europe.

The company also revealed more than 2,200 customers have ordered an all-new Ford Mustang since the iconic car became available to order across Europe earlier this year. 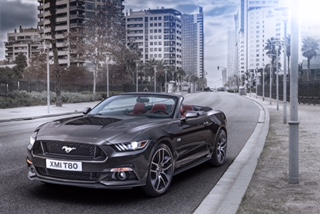 The 5.0-litre V8 fastback model with six-speed manual transmission reaches 100 km/h from a standing start in 4.8 seconds – faster than any Ford in Europe since the low-volume Ford GT supercar launched in 2005. The Ford Mustang 2.3-litre EcoBoost Fastback manual reaches the marker in 5.8 seconds.

Ford Mustang drivers can optimise the car’s performance to suit their mood and driving conditions using Selectable Drive Modes, and away from the public highway can use Track Apps to monitor driving performance. Ford Mustang 5.0-litre V8 drivers also can achieve the fastest possible acceleration off the line on the track assisted by Launch Control technology. Mustang also delivers up to 0.97 g-force when cornering.

“The new Ford Mustang will be wickedly fast off the line and throw you back in your seat with a thrilling engine soundtrack,” said Hermann Salenbauch, Mustang vehicle line director. “But Mustang isn’t just fast in a straight line. The ride and handling will be a revelation for European drivers.”

To help drivers get the most from the car at the track, the Ford Mustang also delivers Track Apps that can be controlled via the steering wheel and viewed in the instrument panel, including accelerometer, acceleration timer and brake performance, which measures braking time and distance from a set speed.

Available for the 5.0-litre V8 with manual transmission, the Launch Control system holds the engine at a pre-set value between 3,000 rpm and 4,500 rpm with the accelerator fully depressed. When the clutch is released, torque delivery to the rear wheels is controlled for maximum traction and consistent standing starts. An electronic Line Lock system also available for the 5.0-litre V8 applies only the front brakes, allowing drivers to warm the rear tyres.

Lightweight materials include aluminium used for the bonnet, front wings, suspension, transmission and brakes. High-strength steels, laser welding and hydro-forming techniques contribute to the stiffer body for an enhanced driving experience and safety.

Further standard equipment includes a nine-speaker sound system, and SYNC 2 voice control connectivity with 8-inch colour touch screen. Ford Mustang is exclusively available to order in Europe at new FordStore locations opening across the region. The first LHD vehicles are set to reach dealerships in continental Europe from July and RHD vehicles will be in Ireland and the U.K. from November.