The all-new Jaguar XE was launched this week with a competitive entry price of €37,995 for the SE 2.0 litter diesel engines entry-level version, which goes on sale in September. The 180 bhp version of this engine is available now with a price tag of €39,100 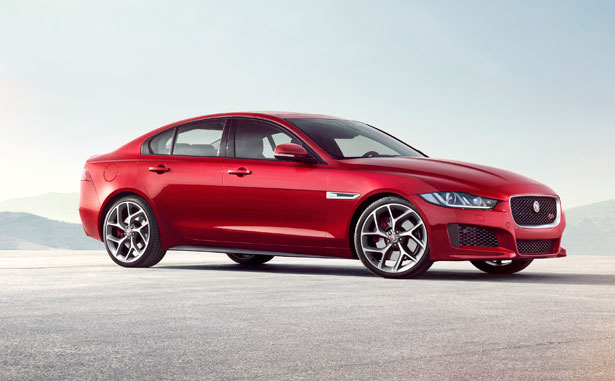 The XE provides Jaguar with a new entry level model to compete in the in the global premium mid-size saloon segment with the likes of the Audi A4, BMW 3-Series and the Mercedes-Benz C-Class among others. It has starting price advantage on the lower costing of that trio of about €2,500. It was described to me by a Jaguar Land Rover Ireland spokesman that the new XE is Jaguar’s most important car ever.

The all-new model is the carmaker as the first of a new generation. Next up will be the new XF in the autumn and it will be followed by Jaguar’s first-ever crossover/SUV, the F-Pace. It will debut at the Frankfurt Motor Show (September 17-27), and is expected to go on sale in 2016.

Jaguar says that the new XE redefines the concept of the sports saloon and is a true driver’s car. Well it certainly the coupe like profile, classic rear-drive stance and dynamic styling looks great. Then the press release says: “The double wishbone and Integral link suspension gives precise handling and a supple ride”. However, the drivability depends very much on the suspension setting and mode that is selected.

After my hour long test drive in west Dublin and Co. Kildare in the new automatic 2-litre 180bhp Ingenium diesel, with an 8-speed automatic transmission I found that it lives up to what it says on the tin when you select the ‘Sport Passive’ suspension setting and dynamic drive control mode (the other options being: eco, normal, and winter modes). 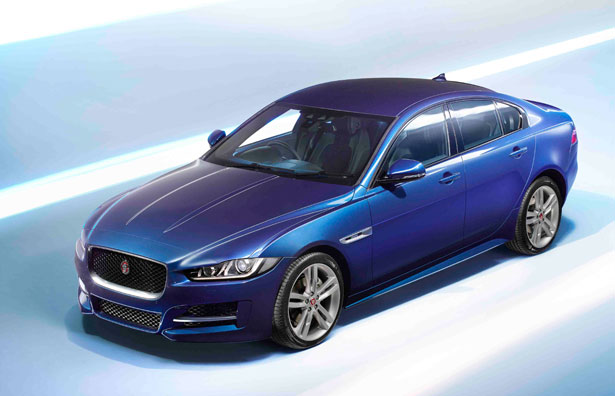 To this end, I think that Jaguar sales people in Ireland will have to get first class training in demonstrating the various drive options. They should also afford genuine potential buyers a decent length of a test drive to experience those options. Otherwise confusion will thrive and the buyer will go elsewhere to well established competitors, making it very difficult to achieve their sales target of 300 units or 10 per cent of the segment.

The XE is the first generation of Jaguar cars to feature the all-new, high-tech Ingenium engines. The i4 Ingenium Diesel engine’s efficientcy is hard beaten, in that it promises it can achieve less than 4 litres/100km (or 75mpg) with excellent performance. It all adds to the new XE being by far the most efficient Jaguar ever.

The petrol engined offerings in the new XE will include a 2.0 litter 240bhp unit and I’d love to try (preferably on a race track) the special order Supercharged 3.0-litre V6: 340 bhp version, which has a 0-60mph time of just 4.9 seconds.
Six-speed manual and eight-speed automatic transmissions, as well as the electric power steering delivers benchmark response with CO2 savings of up to three per cent. The fact that it is the most aerodynamic Jaguar ever: with a Cd 0.26 also helps.

With about 75 per cent monocoque body made of aluminum, the Jaguar XE is the first model developed from Jaguar Land Rover’s new modular vehicle architecture. And it claims to be the first in the class. The XE also boasts to being the lightest and stiffest Jaguar saloon, and the long 2,835mm wheelbase and low seating position enable excellent proportions and a streamlined profile.

Inside, the XE offers high levels of comfort and spaciousness, with indentations in the rear roof to accommodate tall passengers in the confines of coupe-like design. Materials and finishes combined with Jaguar craftsmanship make this first class interior that differs from anything else in the segment. Jaguar’s new infotainment system takes centre stage: its innovative 8-inch touchscreen brings fast, intuitive access to all features and functions. Sat Nav is standard across the whole XE range.

Jaguar has developed a number of technologies to make driving safer, more relaxing and more enjoyable. From systems that improve low-speed traction in adverse conditions to smart braking systems which use stereo cameras to scan the road ahead. Here are two that stand out for me. 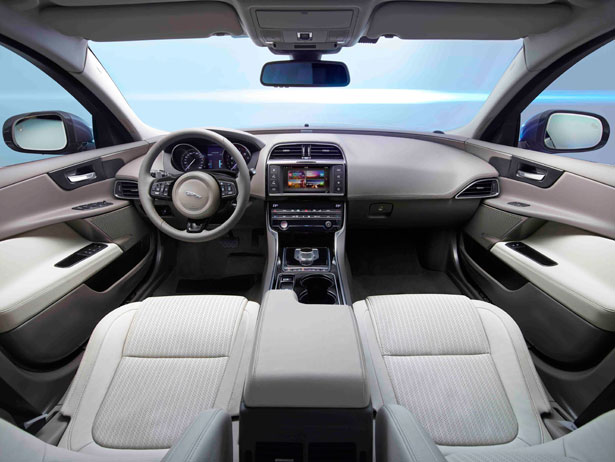 First of all, the world debut of Jaguar’s ‘All Surface Progress Control’ (ASPC), a
revolutionary system that maximises low-speed traction in adverse conditions like snow-covered driveways and ungritted winter roads. It is an excellent idea, particularly for rear-drive cars. This unique traction management system, akin to a low-speed cruise control, will give the XE unrivalled all-weather capability among rear-drive cars in the segment. It is available as standard on all cars with an automatic transmission.

Mounted in front of the rear-view mirror, the forward-facing stereo camera can detect vehicles up to 100 metres away. If the algorithms in the AEB control module determine that a collision is likely, the brake system is pre-charged and the driver receives a visual warning in the instrument cluster and, if fitted, the head-up display. If no action is taken, full braking force is triggered automatically: the AEB system enables collision avoidance or mitigation at speeds up to 80km/h.

A third that I also like and it is available as an optional extra – Laser Head-Up Display (HUD) is a first for Jaguar and the industry. It generates high-contrast colour images directly in the driver’s line of sight and is smaller and almost a third lighter than existing TFT systems. The virtual images appear to ‘float’ two metres in front of the driver. Displaying information such as speed, turn-by-turn navigation instructions, traffic signs, and cruise control settings in this way means that the driver’s eyes remain focused where they’re needed most: the road ahead. Greater contrast means greater resistance to image ‘washout’ in very bright sunlight. Another advantage of laser technology is that the images remain clearly visible should the driver be wearing polarised glasses.

In total there are 93 other optional extras and also 160 accessories available for the new XE.

The All-New XE is being launched with ‘Jaguar Care’ – a new three-year warranty and unlimited mileage servicing and roadside assistance package. It offers ‘peace of mind’ for the first three years of ownership, regardless of mileage, but excludes wear and tear items such as tyres etc.

Jaguar Land Rover Ireland’s Managing Director, Gerard O’Farrell told the Auto trade Journal, “The XE is the most hotly anticipated Jaguar to-date with outstanding levels of comfort and luxury, coupled with breathtaking performance.  With a very competitive entry price of €37,995 as well as a free three year service plan with Jaguar Care, we’re confident XE will open up the Jaguar brand to new customers and we look forward to welcoming them to dealer showrooms in the coming weeks”.

I’m looking forward to a week long test in the new XE later this summer.