Euro NCAP has released the results of 15 cars, with 14 out of 15 cars tested receiving 5 stars, the exception being the Dacia Lody, which received a 3 star rating.

Whereas three stars may satisfy Dacia’s own immediate ambitions, Euro NCAP has called once again on consumers to opt for safety, with plenty of other vehicles in this category scoring five stars this year.

At a time when several manufacturers are scoring almost full marks in one or more areas of assessment, the Lodgy performed below average in all areas of safety. In the frontal impact, the screen pillar was heavily deformed at the top of the windscreen and the roof was bent in front of the B-pillar. The rear passenger floor panel and tunnel were completely separated, extending into the driver’s footwell and the transmission tunnel was deformed between the front seats.

In pedestrian protection, the Lodgy’s score of 44 percent compares unfavourably with other cars in this release, all of which scored more than 60 percent. The child protection score of 77 percent is unexceptional and does not live up to the self-acclaimed “family vehicle” reputation. Finally, Dacia has decided not to make electronic stability control as standard equipment, exploiting the last possible opportunity before the technology became mandatory.

Dr Michiel van Ratingen, Secretary General of Euro NCAP, said: “It is disappointing to see the Lodgy do badly in our tests, especially coming just a week after the Sandero, branded a Renault in South America, was given a poor one star rating by Latin NCAP. The Lodgy is a budget vehicle and customers will accept compromises in comfort and performance, but not safety. Euro NCAP believes that occupants’ safety should be paramount, regardless of how much they pay for their vehicle.”

At the other end of the cost scale, the Range Rover and the Volvo V60 Plug-In Hybrid have both performed well. The V60 Plug-In Hybrid has scored very similarly to its conventionally-engined counterpart, assessed last year, despite the hybrid powertrain adding nearly 350 kg. In contrast, the Range Rover has shed some kilograms, weighing over 200 kg less than the car previously tested by Euro NCAP. Euro NCAP understands that, despite generally good results and a five star rating, the Range Rover will soon be equipped with an improved head restraint to bring whiplash protection in line with expectations for a car of this quality.

The new Golf has scored similarly to its predecessor in most areas but sets a new benchmark by including several advanced driver assistance technologies. The Golf is available with a Multi Collision Brake system, Front Assist and Proactive Occupant Protection, all newly rewarded by Euro NCAP Advanced, as well as Lane Assist. However, despite its impressive array of advanced systems, the car misses ot on a standard-fit rear seatbelt reminder, a feature which is commonplace in many cars today. 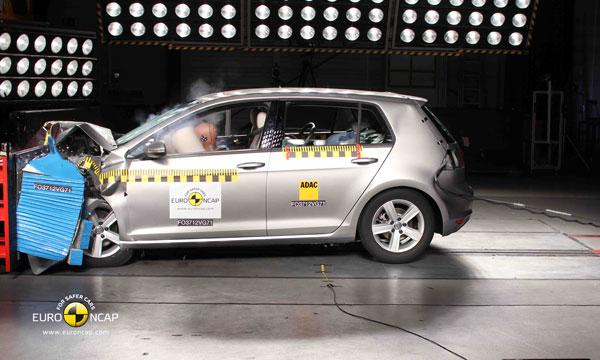 Other cars fitted with advanced driver technologies are Mercedes-Benz’s entry-level car, the A-Class, and the Ford Fiesta. The A-Class gets Collision Prevention Assist and Attention Assist as standard equipment, with PRE SAFE available as an option. The Fiesta is offered with MyKey, a programmable key system that allows some safety-critical characteristics of the car to be tailored to particular drivers. For the Fiesta, that may allow parents to help their children drive responsibly, with limits on maximum speed and more insistent seatbelt reminders. Dr Michiel van Ratingen: “Programmable keys open up a whole new range of possibilities, not just for parents and their children. The technology will also be of interest to companies with safe-driving policies and I look forward to more widespread application of this sort of system in the future.” 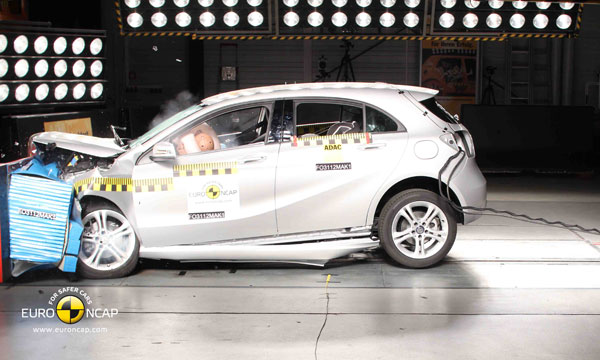