ZF’s new eAMT (electrified Automated Manual Transmission) technology is an innovative concept for the hybridization of front-transverse vehicles that integrates the company’s electric axle drive system (eVD) and an automated manual transmission (AMT) into one system. The transmission actuator and the electric rear axle operate together with intelligent interaction. This results in the eAMT concept no longer experiencing tractive force interruption. The electric motor bridges the gap in accelerative force of the AMT, thanks to its design. In addition to the hybrid functions of electric drive and recuperation and boost, eAMT also features electric all-wheel drive. ZF software regulates the networking and coordination of the internal combustion engine, electric motor and automated transmission.

For the hybridization of price-sensitive small to compact vehicles with front-wheel drive, the greatest challenges are currently additional cost and development effort as well as limited installation space.
“With eAMT, ZF has developed a fully-fledged plug-in hybrid drive for front-transverse vehicles,” said Norman Schmidt-Winkel, functional developer of electric drives at ZF. “This increases flexibility for vehicle manufacturers. They can use existing platforms to implement conventional drives or plug-in hybrids. The ZF concept integrates an automated manual transmission and an electric axle drive system on the rear axle into one unit. In some vehicle classes, automatic transmissions are out of the question for reasons of weight, space or cost. In this scenario, the automation of manual transmissions is a great way to significantly increase comfort and efficiency for drivers, as they don’t need to actuate the clutch or change gears.” 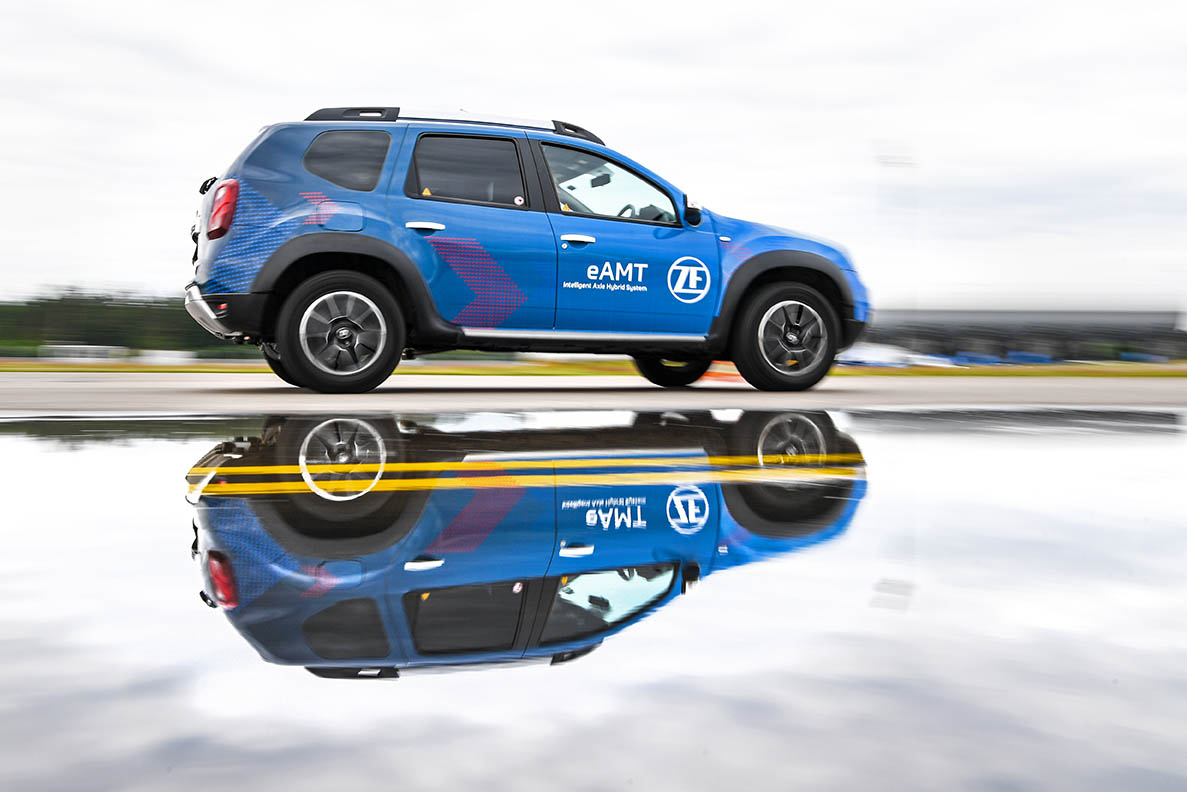 Thanks to electric drive and intelligent drive management, eAMT’s shift comfort and performance are almost on par with more costly torque converter or dual clutch transmissions. As soon as the AMT disengages in order to engage a new gear, there is a tractive force interruption. This is normal for automated manual transmissions due to their design. With its Traction Torque Support function, the new eAMT almost completely compensates for this short break in accelerative force. The electric drive on the rear axle precisely bridges this break with a perfectly timed insertion of torque.

A ZF eAMT demonstration vehicle based on a current compact SUV platform underscores just how well this balance of force between the front combustion engine, the automated transmission and the rear electric drive works in real-world applications.

“The driver is absolutely unaware of the complex system sequences and control processes running in the background, “says Schmidt-Winkel. “When accelerating, only the benefits of completely jerk-free, powerful acceleration can be felt. Previously, these benefits would only be available in much more expensive hybrid vehicles with more complex transmissions. We also utilized the eAMT system´s potential for other features that increase efficiency and driving safety.”

The electric rear axle drive not only supports gear changes: It will also activate automatically and at lightning speed as soon as additional thrust is required such as when overtaking, or when all-wheel drive is needed on slippery road sections. In addition, ZF has dimensioned the electric motor in the demonstration vehicle to be so powerful that it has the capacity to move the SUV under electric power alone. It then travels in all-electric mode and with zero local emissions. This eAMT operating mode is particularly suitable for urban driving, creep mode in traffic jams as well as general maneuvering and parking.

Conversely, eAMT also enables coasting, i.e., saving energy while gliding along with the combustion engine drive disengaged. This function benefits from the asynchronous machine (ASM) in the rear. Unlike permanent-field synchronous machines (PSM), the former turns without resistance as long as the hybrid manager does not actuate it. The plug-in hybrid also has familiar features such as automatic engine stop and recuperation. With eAMT, manufacturers can freely select the functional scope of future plug-in hybrids and determine how powerful their electrical motors are to be.