The dual mass flywheel (DMF) dampens torsional vibrations and thus allows the engine to run efficiently at significantly lower speeds than is possible with a conventional flywheel. This reduces fuel consumption.

When replacing the DMF, ZF Aftermarket says that garages should explain to customers that for optimal performance their vehicle’s drivetrain relies on this damping function. ZF warns that installing a simpler, cheaper replacement part such as a single-mass flywheel on everyday use passenger cars risks damaging the transmission. 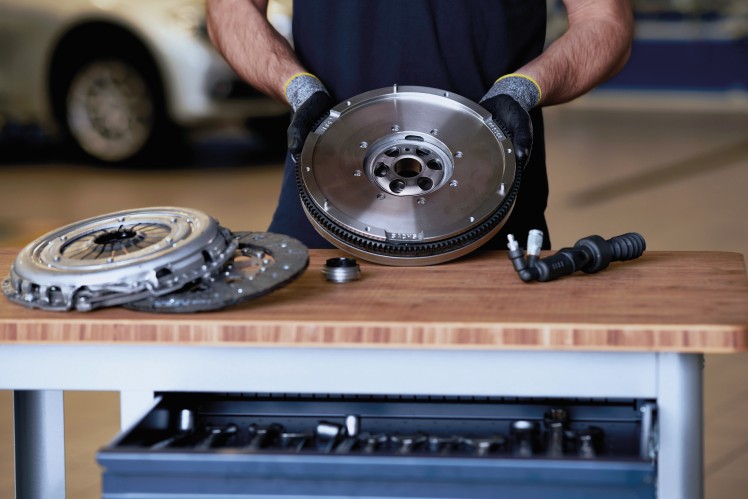 The DMF plays a significant role in ensuring that today’s vehicles with internal combustion engines run very smoothly – despite high combustion pressures, multiple injections and the associated rotational irregularity, which is particularly noticeable at low speeds. The integrated spring and damping system largely decouple the torsional vibrations from the rest of the driveline. The result is noticeably better noise and driving comfort.

However, the dual-mass flywheel is not just a comfort feature, but an integral part of the engine’s design. This is because only the DMF makes it possible at all to run the power unit at extremely low speeds in modern transmissions with extreme overdrive designs. However, many car owners are not aware of these connections. When the DMF needs to be replaced due to a defect after high mileage, they often want a cheaper repair alternative, such as a single-mass flywheel, which is offered by some spare parts suppliers.

Philipp Janczewski, head of training development at ZF Aftermarket, urgently warns workshops not to give in to such requests: “If a vehicle is converted from a DMF to a single-mass flywheel during a clutch repair, not only does the driving comfort and smoothness of the vehicle decrease, in the worst-case scenario it can even lead to transmission damage.

“Vehicles equipped with a DMF as standard have higher torques, increased ignition pressures and generally higher performance. The DMF protects the transmission from the resulting strong torsional vibrations and thus prevents friction and wear of the transmission parts. This is something that torsional dampers in conventional clutch discs cannot do.”

Another possible effect of converting to a single-mass flywheel is the change in emission levels. If problem-free driving in the low-speed range can no longer be guaranteed, then consumption increases and with it the emission of carbon dioxide.

ZF notes that the dual mass flywheel is not always the cause when a driver reports unusual noises in this area of the vehicle to the workshop. Nevertheless, it is not uncommon for it to be replaced as standard procedure when such noises are heard.

ZF Aftermarket experts believe this isn’t always necessary. The causes of the unpleasant noises can be the result of other things such as a fault in the injection system.

Another possible cause of noise is poor performance of the starter motor – either due to insufficient battery voltage or corrosion of the electrical contact surfaces. For this reason, the experts strongly recommend an intensive fault diagnosis is carried out in the entire engine periphery before removal, to identify the correct cause and avoid consequential damage to the DMF.

ZF Aftermarket boasts the necessary knowledge regarding troubleshooting, maintenance and replacement to interested workshops as part of its training programme. Servicing this drive component requires a trained eye and a great deal of detailed knowledge about the interaction with the transmission and clutch.

Its training courses address these topics in a practical manner and are the ideal preparation for the challenges that automotive workshops may encounter when working on the dual mass flywheel.

ZF Aftermarket will be exhibiting at this year’s Auto Trade EXPO, which takes place from Saturday and Sunday, October 15-16 at the RDS Simmonscourt in Dublin.