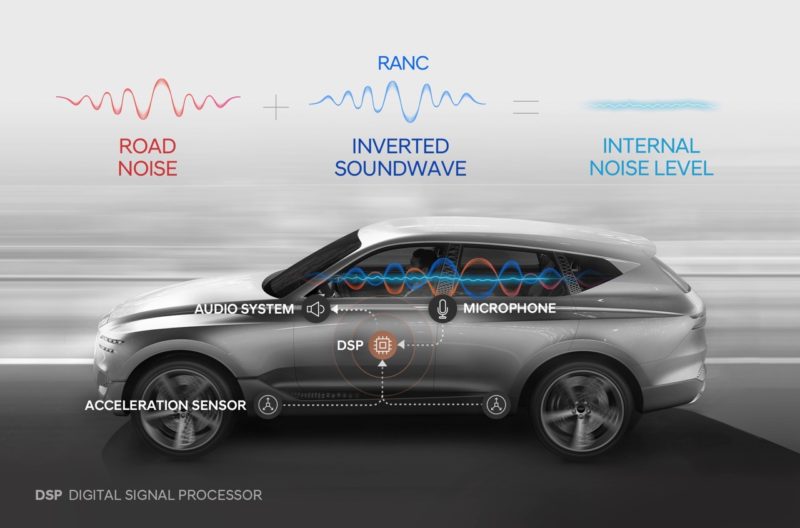 RANC builds on the Group’s current Active Noise Control (ANC) technology, which actively reduces noise by emitting soundwaves inverted to incoming noise. ANC is a software-driven technology that analyses the in-cabin sound to decrease engine and road noise, versus than the passive method of blocking noise through sound insulation.

The existing noise insulation method involved sound insulations and dynamic dampers, which not only increased weight but also failed to block the buzzing infrasound completely. In contrast, ANC utilises much lighter parts like microphones and controllers to control the noise and reduces infrasound more efficiently. The technology is already available in some HMG vehicles.

However, due to the limitations of noise measurement and analysis technology, the existing ANC was only able to be utilised when noise was constant and the occurrence of the noise predictable. The Group’s current ANC technology has been most commonly used to counteract constant engine noise. Given that it only takes about 0.009 second for road or engine noise to reach the passenger, the current technology was limited.

With the first-ever RANC technology, HMG is able to greatly improve in-cabin quietness. The new system can analyse various types of noise in real-time and produce inverted soundwaves. For example, there are different types of road noises that the new technology can process, such as resonant sounds created between tires and wheels or rumble sounds coming up from the road. 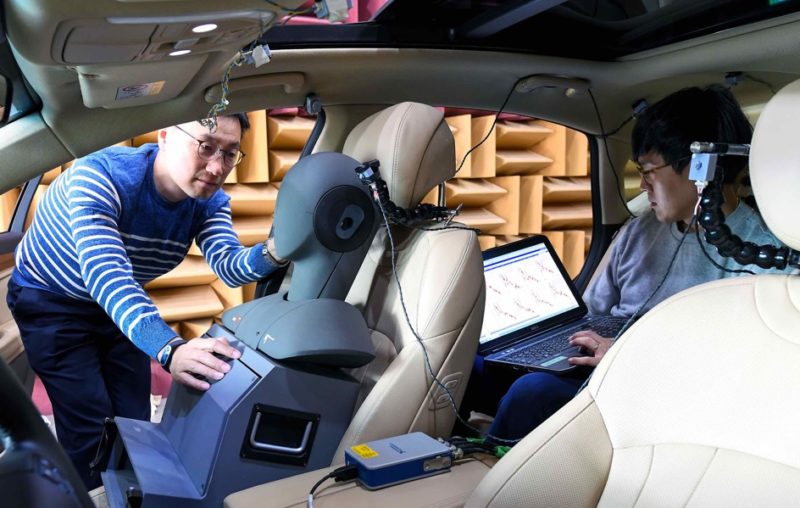 The working principle of RANC is as follows: Using an acceleration sensor, RANC calculates the vibration from the road to the car and the control computer analyses road noise. As its computation and signal transfer speeds are optimised, it only takes 0.002 second to analyse the noise and produce an inverted soundwave, generated by the DSP (Digital Signal Processor). The microphone constantly monitors the road noise cancelation status, and sends the information to the DSP. RANC is able to conduct accurate noise analysis and rapid computation to combat road noise for the driver’s seat, the passenger seat and rear seats separately.

Based on tests evaluating road surface, vehicle speed, and different seating positions, RANC was able to reduce in-cabin noise by 3dB. That 3dB level is roughly half the noise level as compared without RANC. Thanks to this achievement, the Group can potentially decrease the amount of unsprung weight in a vehicle, utilising fewer sound-insulating parts and dampers as compared with before.

HMG went through six years of research and development for the mass production of RANC. Especially, the pre-production phase involved an open innovation between industry and academia, with participation by Korea Advanced Institute of Science and Technology, WeAcom, ARE, BurnYoung and more. Furthermore, the mass production phase was carried out with global car audio company, Harman to increase degree of competition.

HMG has completed domestic and American patent application about the location of sensors and signal selection method, the core technology of RANC.

“RANC is a remarkable technology which takes existing NVH technology to the next level,” said Gangdeok Lee, a Research Fellow of NVH Research Lab, “We will continue to take the leading position of NVH technology and deliver the highest level of quietness to customers.”

The technology will begin to be applied to an upcoming new Genesis model.