Technicians are starting to see an increase of Electric Water Pump replacements, as the popularity of using auxiliary and secondary electric pumps grows amongst vehicle manufacturers in their quest to reduce engine emissions. It is therefore imperative that technicians fully understand these pumps and the issues that can cause premature failures to ensure the longevity of a repair.

Modern, low-emission, high-output engines are designed to run within a very small temperature window in order to maintain optimum efficiency. This is controlled through the Electric Water Pump, which regulates the coolant flow dictated by the electronic control unit (ECU). When it comes to forced induction engines, additional cooling of the turbo/supercharger after the engine is shutdown is required in order to prevent premature wear, particularly to the turbo bearing.

When switched off, the temperature of the turbo bearing on these engines can reach up to 340°C within seconds, which can result in the oil in the bearing housing losing its viscosity and lubricating properties, causing the bearing to wear and subsequently lead to the failure of the rubber or plastic seals. Therefore, when the engine is switched off, the electric pump is designed to continue circulating coolant for a number of minutes. This continues until the turbo has sufficiently cooled, which manages the temperature and prolongs the lifespan of the turbo.

First Line, an established worldwide supplier of premium quality automotive components, is aware of many of the issues that can cause problems with the Electric Water Pump, and therefore advises how to carry out a successful replacement. 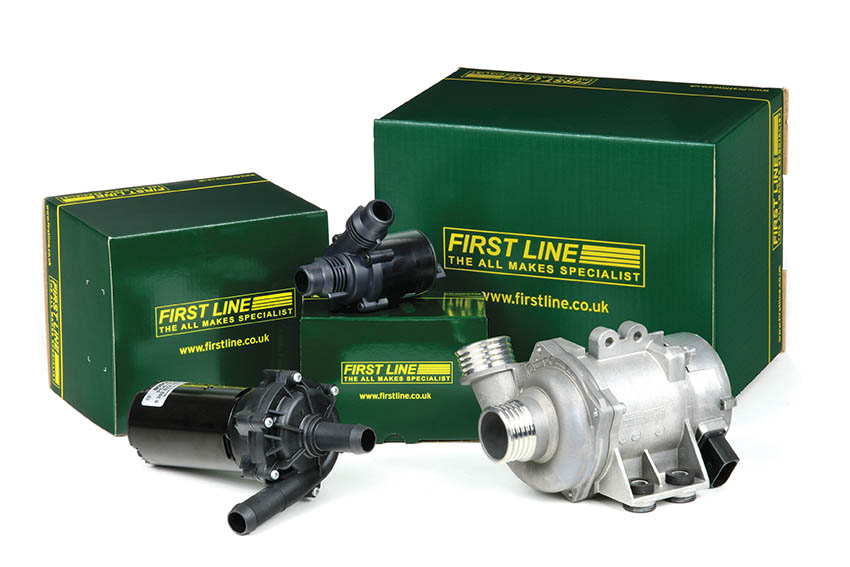 The N51, N52, N53, N54, N55 and N63 engines in several BMW models have a tendency to experience water pump failure from as early as 60,000 miles, which is often related to the electric motor in the pump not running at the correct speed and eventually stopping.

This potential failure should be detected by the primary vehicle control module during its system scan. However, if undetected, the only warning to the driver will be the yellow dashboard light illuminating, followed shortly by a red light, indicating the engine overheating.

Some VW T4 drivers have complained that the water pump continues to run long after the engine has been switched off, running down the battery. In this instance, First Line recommend checking the coolant temperature sensor, which could have failed and locked open, causing the pump to operate continuously.

Range Rover also have an inherent problem, which is experienced on the Range Rover III/IV and Range Rover Sport I. Basically, during the vehicles production, the Electric Water Pump connector may have been wired incorrectly. As a result, the auxiliary coolant pump that cools the supercharger runs backwards. This will cause the pump to fail prematurely, so when identifying the cause of the original failure, it’s worth checking the connector is wired correctly to avoid further problems.

It is important to note, that when carrying out any water pump repairs, it is imperative that the old coolant is thoroughly flushed through and the system refilled with fresh coolant of the correct specification.

With a comprehensive premium quality range, covering a multitude of references, every product comes with a 24-month/24,000 mile warranty, so workshops can be confident that First Line has the replacement solution they need.