Anyone currently in the market for a used car is being warned to make sure all loans on it have been paid off first, as “you may be buying a huge problem”.

It comes as vehicle data expert Cartell.ie reports that it has seen a significant increase in the overall level of outstanding finance on used cars for sale.

From a sample of over 5,906 vehicles offered for sale and checked via the Cartell.ie website in the first six months of 2022, the figures show that a one-year-old vehicle now has a 32 per cent possibility of being on finance, up four per cent for the equivalent figure 12 months ago.

Readers may recall that last year the comparable figures showed a decline in financing level, over those recorded in 2020, which Cartell.ie attributed to a slow-down caused by the pandemic.

Cartell.ie says the market is “clearly firmly out of this environment” and finance levels have risen significantly since July of 2021.

In the case of two-year-old vehicles (2020) the levels of vehicles offered for sale with finance outstanding is 36 per cent.

This means there is still more than a one-in-three chance of a two-year-old vehicle being offered for sale with finance outstanding, according to Cartell.ie, while the overall level has risen from 32 per cent last year.

In the case of four-year-old vehicles checked last year (2017) there was a 20 per cent chance of a vehicle from that year being offered for sale with finance outstanding based on checks on Cartell.ie in the year gone by, but, like other key years the four-year-old-car level of finance has increased – to 22 per cent this year. 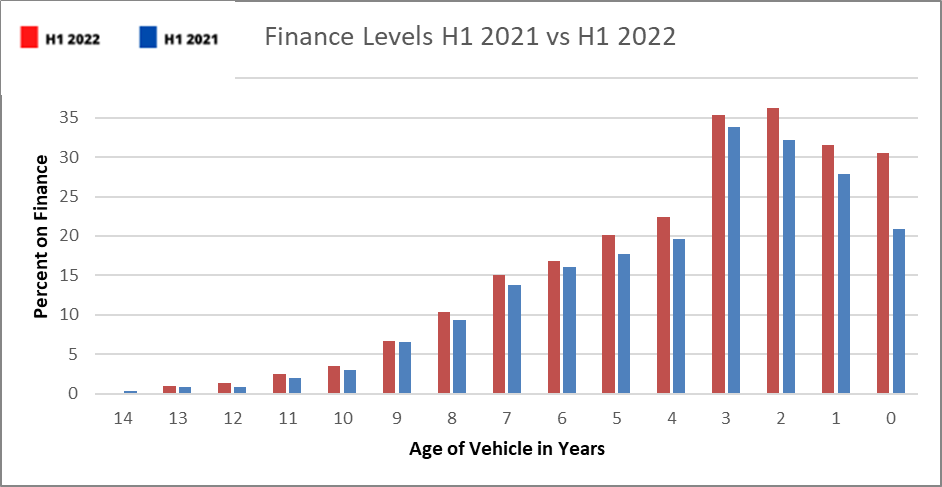 Cartell.ie says that older vehicles are also showing relatively high levels of finance: a six-year-old vehicle, for example, shows 17 per cent with outstanding finance in 2022 whereas the comparable figure last year, in 2021, was lower at 16 per cent.

Ross Conlon, chief executive of CarsIreland.ie said: “Buyers are strongly advised to be cautious in the market as you cannot take good title in the asset until the final payment has been paid to the financial institution.

“This means you may be buying a huge problem.”

According to Cartell.ie, the reasons for the increase between 2021 and 2022 are likely to include increased market activity, due to the reopening of markets in the wake of Covid lockdowns.

Meanwhile, the lack of availability of new cars owing to microchip shortages may have increased car finance in the residual market.