The next generation of Volkswagen Commercial Vehicles is on the horizon with the I.D. BUZZ. Like all game-changing models, it started life as a boundary-pushing concept vehicle to bring the iconic design into the modern age and has evolved into a version ready for daily life. 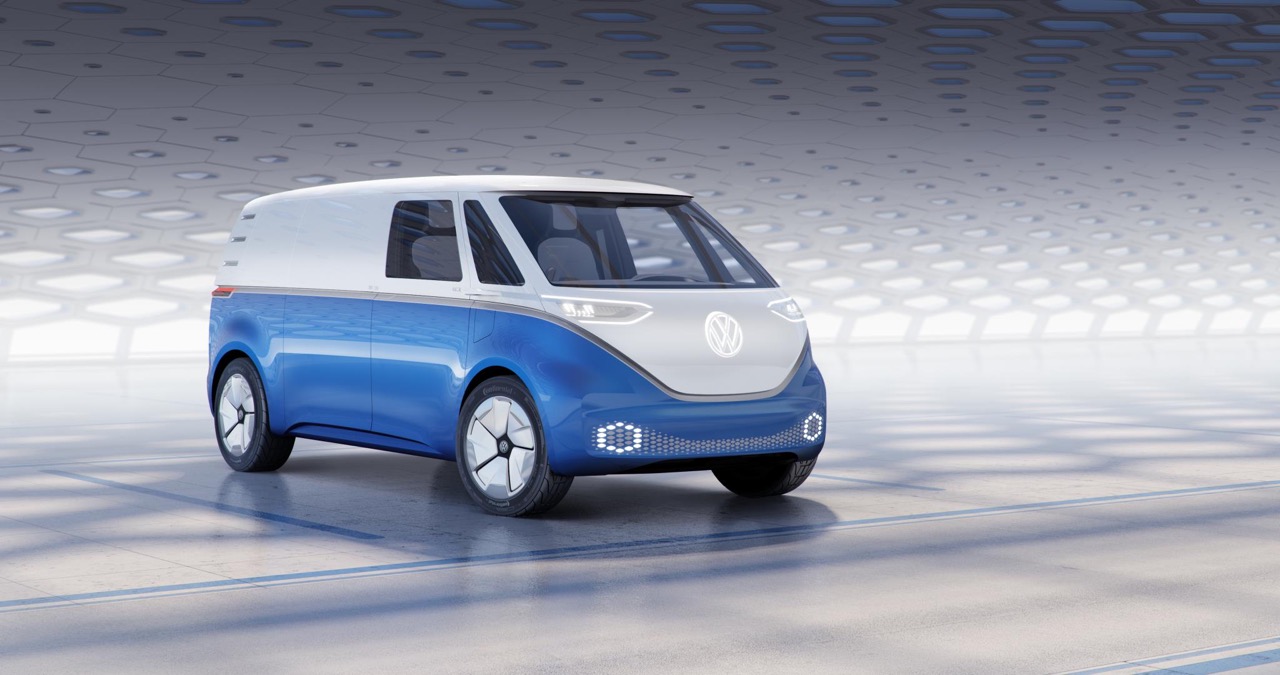 In 2018, the I.D. BUZZ CARGO based on the I.D. family provided a look ahead to a new era of light commercial vehicles

To honour the brand’s heritage of iconic vans and unusual concepts, we’ve rounded out some of the best design studies since the turn of the century – from the very earliest Microbus revival through to adventurous Amaroks and sea-faring Caddys. The highlight of many a motor show over the years, each concept has put its own unique twist on the core vehicles available in the Volkswagen Commercial Vehicles range.And while not all of the more left-field ideas made it into dealerships, each design study has provided a nod to what’s next for the humble van and helped shape the future of the brand.2001: Volkswagen Microbus ConceptThe Microbus/Bulli concept debuted at the IAA in 2001 and showed a vision for the next generation Transporter. The 2001 concept featured a seven-inch screen in the dashboard with another in the roof allowing drivers to see behind them. 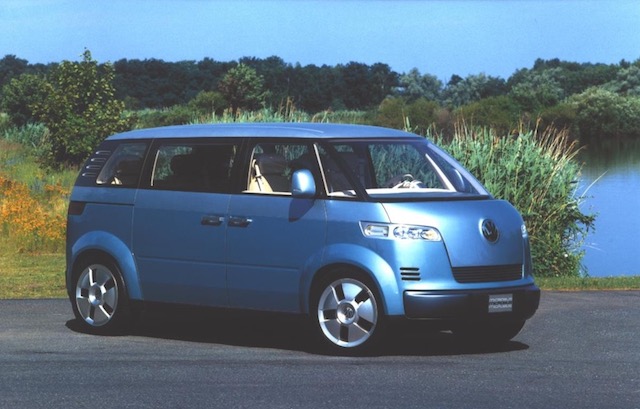 Power was from a new 3.2-litre V6 engine. The concept spawned a design series which included the 2011 Bulli and 2016 BUDD-e, showing the brand’s desire for a model that harks back to the iconic original but encapsulates modern design and powertrains. The I.D. BUZZ will look to bring the classic Bulli into the 21st century – for more information on a piece of future history visit https://www.volkswagen-vans.co.uk/en/electric-vans/id-buzz.html.2006: Volkswagen Crafter AtacamaPrepared by the Design Centre in Wolfsburg, the Atacama was a short-wheelbase Crafter ready for life off-road with an innovative four-wheel-drive system. 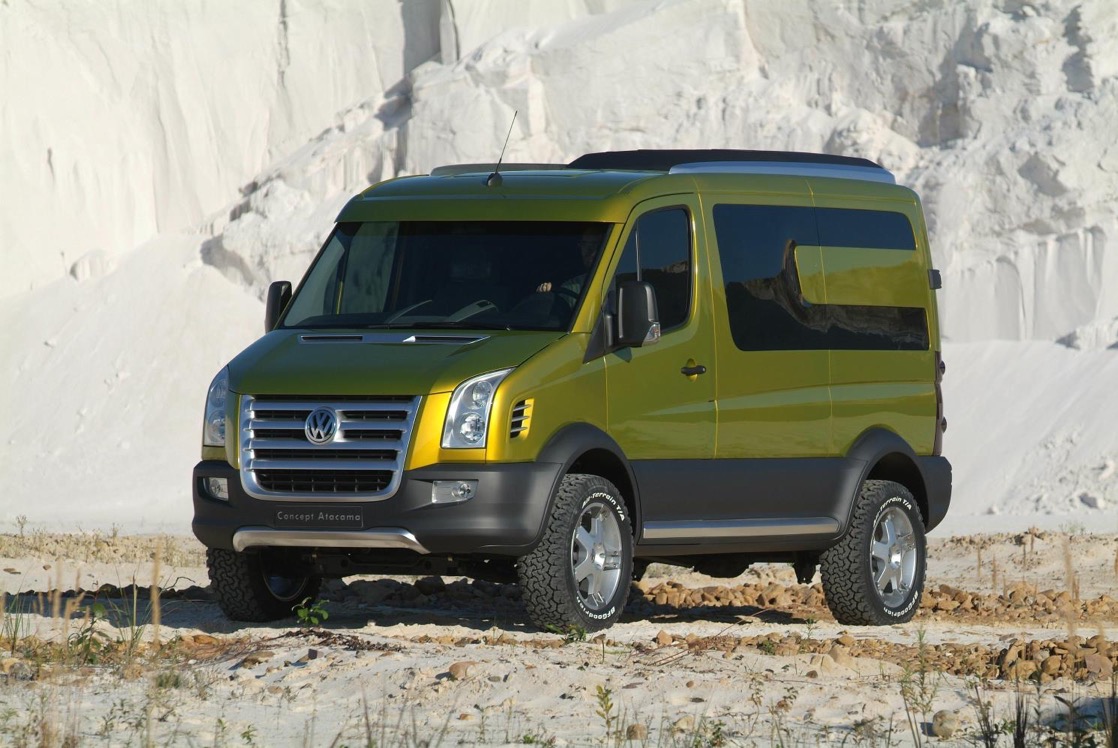 Named after the South American desert, the vehicle had off-road body panels, larger wheel arches and a rear ladder. An upper sleeping level could be fitted for life in the great outdoors. The Atacama name was used on a special edition Amarok in 2015.2008: Volkswagen Caddy ToposSailCreated for the Caravan Salon in 2008, the ToposSail was designed as the ultimate lifestyle Caddy. Taking inspiration from 1950s sports boats, the Caddy ToposSail featured a rooftop sundeck accessible from a hidden ladder and wooden rear loading platform. 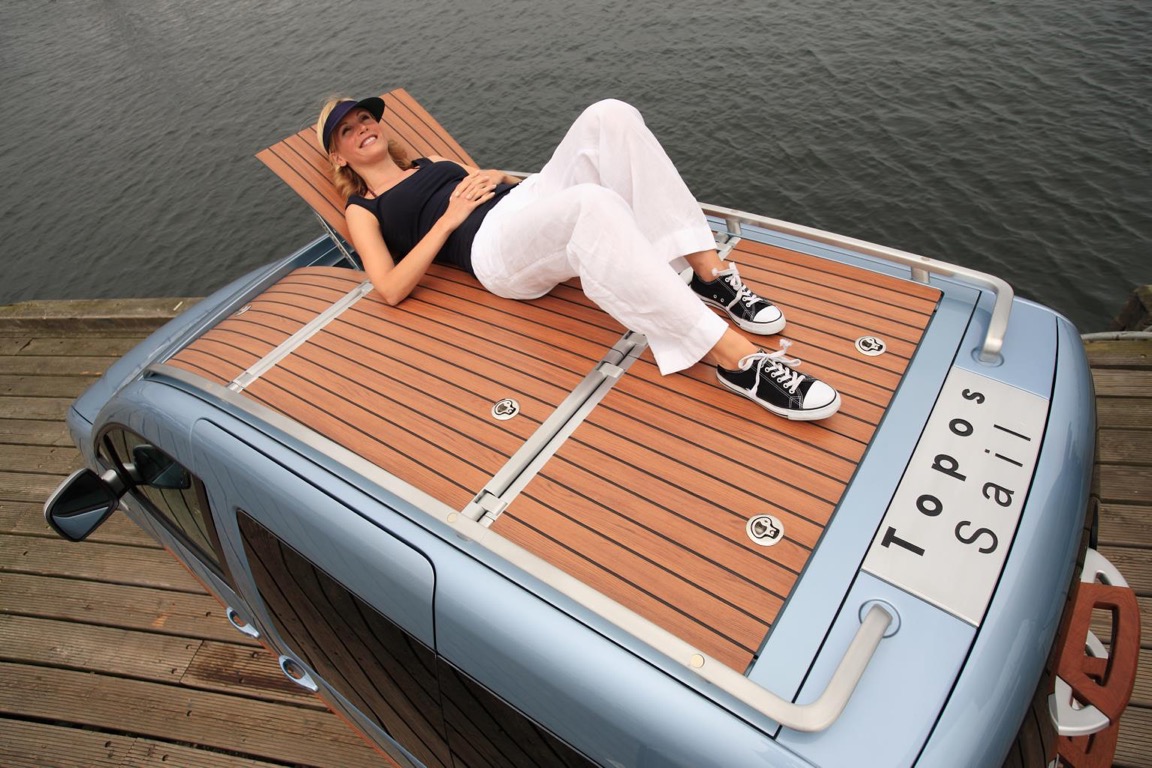 On the sundeck, secret compartments stored cushions and awnings, while the wooden design could be adjusted to create a sun lounger layout. Tinted windows and aluminium inlays added to the exclusive feel for the yachting van.2012: Volkswagen Amarok CanyonThe Amarok Canyon was the most extreme version of the pick-up ever when it debuted at the 2012 Geneva Motor Show. 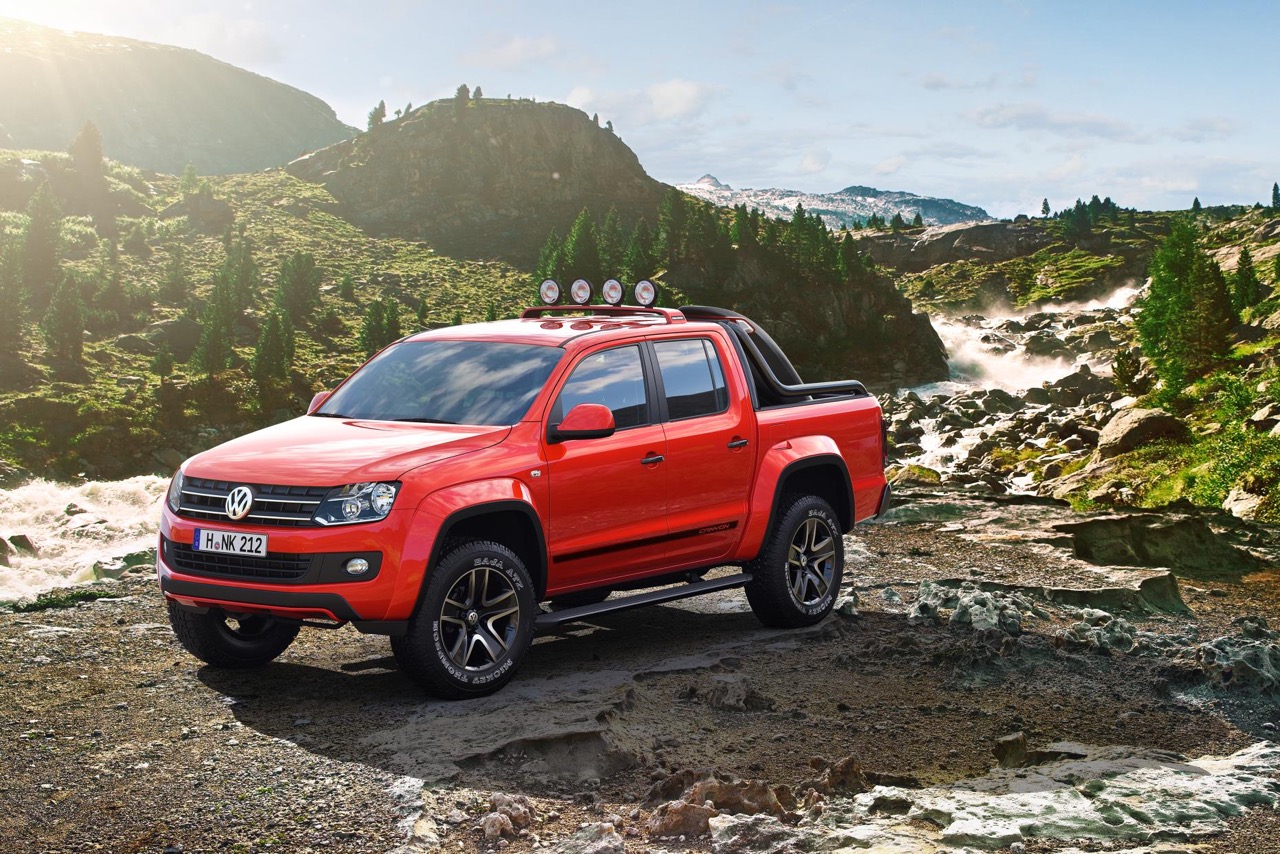 Configured for the extreme sport of “freestyle kayaking” with raised ride height, all-terrain tyres and roof-mounted headlights. Electrically-deployable tread plates helped kayakers climb on board while the cargo bay was designed to accommodate two carbon fibre kayaks with fittings and watertight containers for paddles, helmets, rafting shoes and flotation devices. The Canyon name was used on a special edition run of Amaroks in 2014 featuring some of the additional body features seen on the concept.2012: Volkswagen eT!Launched at the 2012 IAA, the eT! showcased the potential future for electric light commercial vehicles, designed in collaboration with the German Post Office. As well as offering compact dimensions and zero-emissions driving, the eT! was designed with semi-autonomous functions. Using “Follow Me” and “Come to Me” modes the concept could self-drive alongside the courier, while a “drive stick” in the passenger-side – the side that faces the pavement – could be used to control the vehicle. Combined with a standing seat and electrically-powered sliding door, it enabled quick and safe access to both the cabin and parcels, making walking around the van and into the road a thing of the past.2013: Volkswagen e-Co-MotionThe Volkswagen Transporter got an electric makeover at the 2013 Geneva Motor Show with the e-Co-Motion concept. The model was compact and manoeuverable despite its large cargo capacity and 800kg payload. 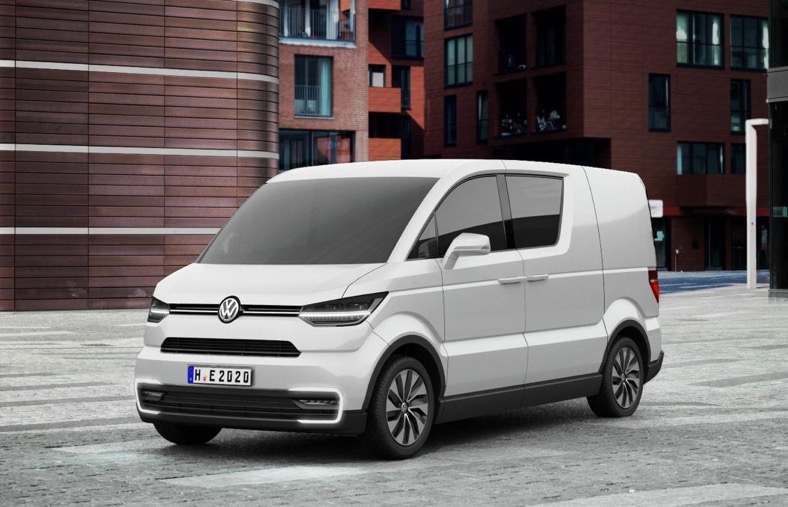 The zero-emission drivetrain was fitted into a partitioned section of the van helping maintain cargo space and allow for bespoke customer conversions, such as passenger shuttles, low platform or refrigerator builds. The I.D. BUZZ will be fitted with the evolution of this electric drive system.2015: Volkswagen Multivan PanAmericanaThe PanAmericana, announced at the 2015 IAA, combined the comforts of the Multivan with the off-road capability of a SUV. 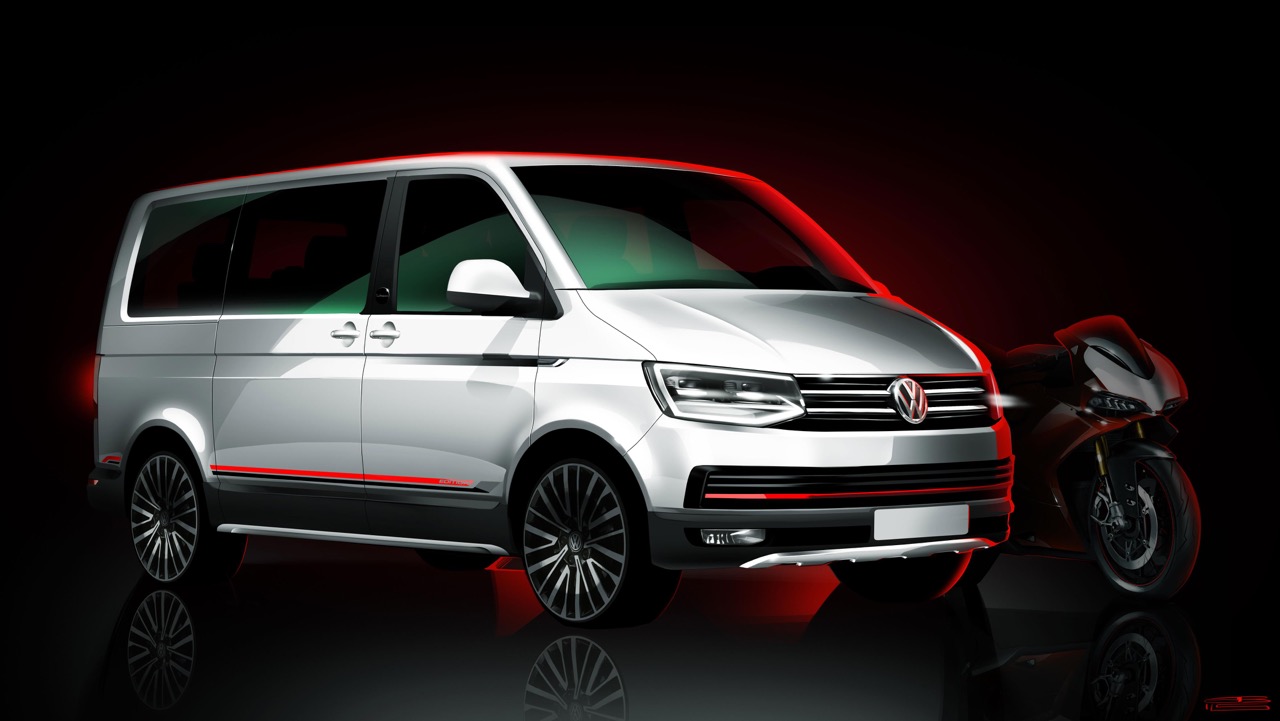 The special edition was designed for motorcycle racers who wanted to transport their superbike to their favourite tracks and courses. Electrically assisted loading and unloading was added to the rear while aluminium diamond plating replaced carpeted floors and an underbody guard was added to improve off-road capability. The standard PanAmericana made it into production a year later.