The braking system, which is available on the new Volvo FH Series, has been developed to support the driver so that the majority of these rear-end collisions can be avoided or mitigated. 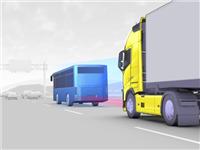 The new system combines a radar and a camera that work together to identify and monitor vehicles in front. The system is designed to deal with both stationary and moving vehicles and can prevent a collision with a moving target at relative speeds of up to 70 km/h.

When the system detects a vehicle that the truck will hit at its current speed, the warning system activates a constant red light in the windscreen in order to bring the driver’s attention back to the road.