Volkswagen announced in May that it would launch its new ID.3 at the Frankfurt International Motor Show, and it has. The ID.3 is the first fully electric production car of the all-new ID model family and it will go on sale next year for under €30,000 for the base battery range model, and after Government grants/ incentives. And as expected, availability will be very limited from launch next year 2020. 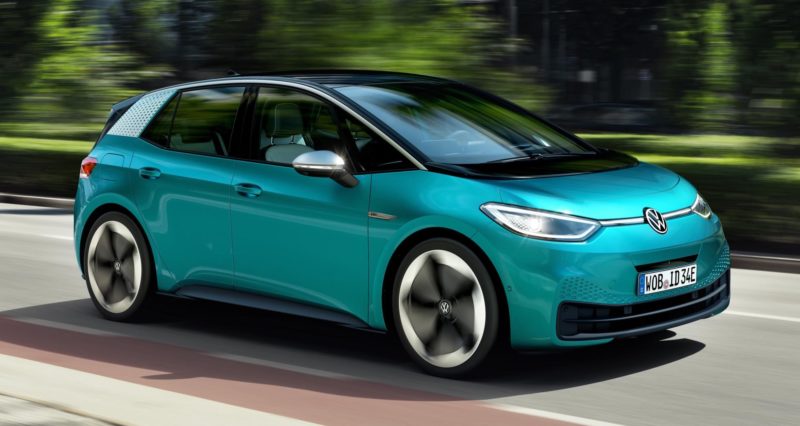 The new model will be one of five new Volkswagen branded cars based on the MEB platform. All will be designed for an electric drive system without compromise.

And the World’s number two carmaker has hailed the launch of the Volkswagen ID.3 as the third-most important car in their history, after the original Beetle and first-generation Golf.

Volkswagen also claims that this new car is the symbol of a new era for the brand. In addition to featuring zero local emissions and great efficiency, it will offer full connectivity. At the same time, the ID.3 reflects the realignment of the Volkswagen brand after the Diesel scandal, and is also the first model with the newly launched Volkswagen logo.

“The ID.3 is an all-rounder that is suitable for everyday use. It is compact, as such offering the manoeuvrability of a small car with the interior space of a mid-range vehicle. It combines exciting design with innovative technology and significant range,” outlines Silke Bagschik, Head of Sales and Marketing for the ID. family, on the evening before the IAA.

Volkswagen also claims that this first model from the ID. series features carbon-neutrality, the impressive driving dynamics that are characteristic of electric cars, as well as the aforementioned full connectivity.

The ID.3 is designed as a spacious family-sized hatchback, and an excellent possible one-charge range of up to 550km in the case of the one with the 77kWh battery. The next version down has a 58kWh battery, with a range of circa 420km on a full charge. That’s 10-20km lower than the Kia pair (eNiro and eSoul), both of which I tested recently and came away very impressed with their real-world ranges. The base model, the one mentioned earlier that is expected to be priced under €30,000 here after grants, will have a 45kWh battery and an expected range of 330km. All claimed ranges are as per WLTP.

The batteries themselves are integrated into the underbody. This positioning has a positive effect on driving dynamics, as it moves the centre of gravity in the ID.3 significantly lower. The ID.3 is also characterised by optimum weight distribution between front axle and rear axle.

The base version of the ID.3 1st includes a navigation system, a DAB+ digital radio, seat heating and steering wheel heating, armrests at the front, a Mode 2 charging cable and 18-inch light-alloy wheels.

Volkswagen claims that the interior of the new model is revolutionary. The long wheelbase of the MEB layout, combined with very short overhangs, results in an expansive vehicle interior: the Open Space. It boasts that with the room and spaciousness this creates, the five-seater ID.3 sets new standards in the compact class.

It adds that digital, entirely newly designed display elements and controls ensure that every driver will intuitively find their way in the ID.3. Apart from the display in the cockpit, a newly developed, centrally positioned, ten-inch touch display provides drivers with all key information.

The ID. light, which is also new, supports drivers with an LED strip during navigation and can, for instance, prompt them to brake in the event of any dangers. All controls – including those on the electrically adjustable multifunction steering wheel – are operated using touch functions featuring touch-sensitive buttons. Only the electric windows and hazard warning lights are still operated using tactile switches. This is supplemented by intelligent natural voice control. Thanks to App Connect, the ID.3 can be connected with your smartphone within seconds.