Volkswagen’s latest concept car, the Taigun, has been unveiled at the São Paulo motor show, and previews the look of a possible small SUV based on the New Small Family platform, which underpins the award-winning up!

Just like the up!, the Taigun is small on the outside – at just 3.86 metres long and 1.73 metres wide – but big on the inside, thanks to a generous 2.47 metre wheelbase.  These dimensions give the Taigun short overhangs (708 mm front and 681 mm rear) and purposeful proportions, while the clear, concise exterior styling follows the unmistakable Volkswagen design DNA.

Powering the four-seat Taigun is a new 1.0-litre, three-cylinder turbocharged petrol engine producing 110 PS at 5,000 rpm and pushing 175 Nm (129 lbs ft) of torque through the six-speed manual gearbox.  The engine is based on the latest EA211 series, and with the use of direct fuel injection and turbocharging it is able to return a combined fuel consumption of just 4.7 litres per 100km (60.1 mpg), despite being able to take the 985 kg Taigun from zero to 62 mph in 9.2 seconds and on to 186 km/h (115 mph) top speed. 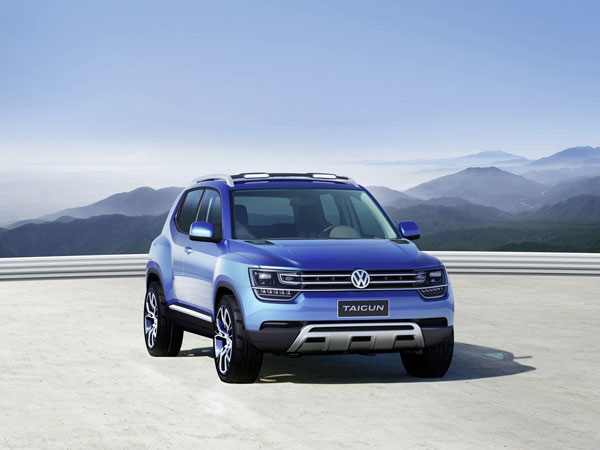 The look of the Taigun is deliberately styled to emulate that of its SUV siblings, the Tiguan and Touareg, as is evident in the rugged side panels, underbody protection and practical roof rails with LED spotlights.  Wide tracks (1,473 mm front and rear) help give the Taigun a purposeful look, while 17-inch alloys with 205/50 R17 tyres, high ground clearance and plentiful torque enable it to deal with rough surfaces.  This is, however, very much a vehicle for the urban environment: the high driving position gives the driver an optimum view in traffic, while there’s plenty of room for luggage, thanks to a practical 280-litre loadspace that increases to 987 litres with the rear seats down.  What’s more, the tailgate is split, with the top two-thirds opening upwards and the bottom third folding down, making loading even easier.

The interior of the Taigun is simple and spacious (headroom is 1,036 mm in front and 980 mm at the back), with controls pared back to a minimum.  The front air nozzles, for example, not only individually control the direction of the air flow, but also the blower speed and the temperature, which is displayed within the nozzle.  Meanwhile the central infotainment system can pair with the majority of smartphones, providing an intuitive interface.  Above this are mounted auxiliary instrument gauges that display oil pressure, coolant temperature and turbo charge pressure.

Volkswagen will be monitoring public reaction to this vehicle before taking a decision on whether to put the Taigun into production.