The technology, fitted as standard to the Golf 8 and to future ID models, allows cars to communicate with each other and with properly equipped road infrastructure and emergency vehicles to give the driver advanced warning of local safety hazards. 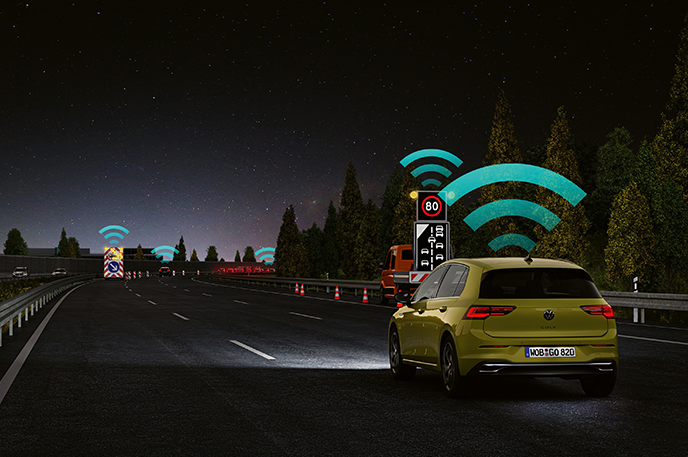 Using ITS-G5 technology, cars equipped with the system can transmit a signal to others if they have broken down or have stopped suddenly and present a safety risk.

Other manufacturers are also considering equipping their vehicles with ITS-G5 technology and, in time, it may be possible for drivers to receive advance warning of motorcycles and tractors.

Secretary general of Euro NCAP, Michiel van Ratingen, said: “This is an exciting area of safety and one which offers the potential to help road users who have, so far, been difficult to protect, like motorcyclists. It is already on Euro NCAP’s roadmap but its full potential will not be realised until many vehicles are equipped with a compatible system, along with roadside hazards. Volkswagen are to be congratulated for making the technology standard on high-selling vehicles like the Golf.”

Volkswagen Local Hazard Warning is a system that uses short-range communication between cars, and between a car and its surroundings, to give drivers early warning of safety hazards.

For example, a car equipped with Local Hazard Warning might issue a warning to other vehicles if it had broken down in the middle of a carriageway or had been involved in a collision.

Similarly, emergency vehicles equipped with such a system might send a signal to nearby vehicles to warn them of their presence, or temporary roadwork barriers could issue such warnings. As well as transmitting such warnings, cars equipped with Local Hazard Warning can also receive these signals and use them to alert the driver to the danger.

The warnings that can be issued and received are:

The direct vehicle-to car/infrastructure communication means that information and warnings are always available to those cars equipped with the system as it does not rely on a phone network.

The benefits of a system like Volkswagen’s Local Hazard Warning, using car-to-car/infrastructure communication, depends critically on the number of cars which are equipped with it or with a compatible system.

Volkswagen will equip future models with the system as standard, representing a large number of vehicles. Nevertheless, it will take time to become commonplace in the vehicle fleet as the average age of vehicles driven in Europe is more than eleven years. In the meantime, it is difficult to quantify the safety benefit.

It is expected to be disproportionate to the numbers of cars equipped with the system, as the prompt reaction of one driver has positive knock-on effects on others.

ADAC tested the system in Germany in a variety of scenarios including, for example, a car broken down at the side of the road behind a corner. In all cases, the system issued correct and timely information to a receiving vehicle, and warnings where appropriate.

Warnings are issued to the driver only when the speed of the vehicle is above 80 km/h. This addresses the situations where most serious accidents happen i.e. on rural roads and motorways, where speeds tend to be higher. In urban environments, driver attention is generally high and the higher traffic density provides earlier warning of hazards.

The system is not switched on at vehicle delivery, in accordance with the GDPR (General Data Protection Regulation), and the customer must activate it by accepting the data protection agreement. Thereafter the system remains on by default, although it can be turned off by the driver.