All-new Ford Transit models are a rare species. Leaving aside facelifts and other minor changes that have taken place over the years, there has only really been three all-new models since 1965, despite over six million having been sold. 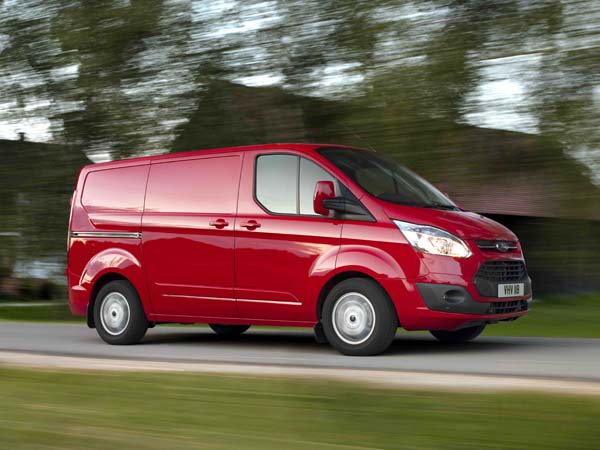 The last all-new Transit and Ireland’s perennial best selling van range was in 2000, with a significant update arriving in 2006. What is different this time is that there will be two new Transits rather than one. This starts with the smaller one-tonne versions available next month, and it comes with a new badge – the Transit Custom.

In addition, we will see the all-new bigger two-tonne range late next year, bringing what Ford promises will be new levels of capability and versatility to the medium and large van market.

The introduction of the new generation Transit Custom, Transit and Transit Connect models is a major step in Ford’s commitment to completely redesign its entire commercial vehicle line-up for Europe by the end of next year.

Ford isn’t stopping there with their commercial offerings. In addition to the new Kuga SUV (van version) next year and in 2014, we will see a new Courier van based on Ford’s Global B platform that already underpins the new Fiesta, and B-MAX. The new Courier will slot in below the next Transit Connect.

The Ford Transit Custom is the new replacement lighter one-tonne derivative of the iconic Transit range, and it goes on sale here late next month. It will have an entry-level price of approximately €22,400 ex-works but inclusive of VAT. That’s about €600 more than the current model, which will also remain available to Irish buyers for the next 12 months.

Ford Ireland says that the price difference reflects a higher standard specification (including safety equipment), and also stop-start, which contributes to about 8 per cent better fuel economy from Ford’s latest 2.2 litre Duratorq TDCi diesel engine. This engine comes in a choice of power – 100, 125, and 155 bhp. The new Transit Custom also comes with a choice of short-wheel or long-wheel-base. Because of attracting the higher VRT the crew-cab versions are likely to be available as special order only. However, the Tourneo Custom people mover will be available.

Unlike car launches, new van previews are all about the basics, the practical details. This is also the case for buyers. After all they must primarily fulfill their workhorse functions, and it’s a bonus if they look reasonably good. Experience has taught me that Ford is very good at building good reliable, functional and durable vans. In addition, van buying is also about price, practicality, payload, fuel economy and cost of ownership.

The first Transits seen on Irish roads was 47 years ago and it worried me when fine specimens of the Mk 1 Transits on display at the launch did not appear alien to my memory. What has changed in addition to the essential for today’s owners and drivers is that manufacturers have move from a position that vans have move dramatically from basic load-luggers to offering drivers car-like comforts and styling.

They have come to realise that drivers spend long hours every day in vans and they should have levels of safety that car drivers get. They should also have a nice comfortable cabins and experience better drivability from their vehicles. These make for happier and more alert drivers, that can do their jobs better.

Ford has advanced this philosophy with their new Transit. The new model is more stylish from the front and rear as well is the side profile. The LED headlights and bulging treble grille to the front and impressive rear lights in equally fine rear door designs all work really well. These stylish features and the angled side profile design all make the switch to the Custom Tourneo version much easier. It delivers a stylish people carrier that Ford also aims to be a serious alternative to mainstream people-carriers.

This premium factor also carries inside with many attractive car-like features. As with many cars, in the Transit Custom, this starts with the driving position, which is accommodated with a fully adjustable steering arm to help find the optimum driving position from a very comfortable seat. There are lots of storage and functionality features evident in the cab. There’s a fold-down worktop, a mobile phone-holder on the dash and the double passenger seat too.

On some high spec. versions that I drove at the launch, there was a long list of options that you would expect to find in an executive-car. These included cruise control, sat-nav, lane departure warning that vibrates the wheel if you cross in to the wrong lane, a rear-parking camera and of course it had Bluetooth phone connectivity as part of the SYNC package.

The dashboard layout and much of the instrumentation looked to be carried over from their latest car range. Ford has worked-in the very latest in the way of in-car technology options and creature comforts into the Transit Custom. This typified by its aforementioned voice-activated SYNC technology, which I only recently experienced in their new B-Max car range. Overall, compared with most vans, the interior has a premium feel. And in this segment, this will attract a lot of owner operator van drivers, who make the buying decision.

The Transit Custom offers wider front doors for access to the cab. And class leading load access via the rear side doors matches this. The new Custom has a payload of 871 litres and it can carry a class leading three euro pallets. The long wheelbase also increases the payload to 1,200 litres.

There is innovation in this area too with an extended load length space under the passenger seats to add an extra couple of feet for longer pipe lengths, ladders etc. seats 10ft in length. It also doubles as a hidden (oops the secret is out!) storage area under these seats.

And another smart move is the positioning of the load tie-down loops/points. They have been fixed to the sides as opposed to the floor, which will prevent the likes of sheets of timber or plasterboard etc being marked or ripped. You can also get the minimum 6′ x 4′ sheets in between the rear wheel housings or indeed upright.

The new Transit Custom Has also been designed to access under two metre high car park barriers with a unique integrated roof rack and ladder on top. The same Ford factory made roof rack is designed to carry up to an impressive 130 kgs weight.

On the road, with a one-ton load, the new Transit Custom drove really well. Thanks to some good sound insulation, the new model was surprisingly refined at speed even on the German Autobahns. The super 2.2-litre turbo diesel engine delivers on performance and Ford say that is matched by very good fuel economy, with a combined cycle of circa 42 mpg.

The new Transit Custom has many best in class features, which along with several other factors all combined to make the latest version of Ireland’s best selling van more attractive to buyers and it makes it easier for drivers to do their job. Winner alright!