Audi had previously announced it is ready to sell the world’s first Level 3 autonomous car, their A8 luxury saloon. At the launch last September, Audi told the press that it would initiate series production of the traffic jam pilot in the new A8 incrementally, depending on the legal situation in the respective country.

However, while the German Government changed its regulations  to allow the use of Level 3 systems, current legislation in the UK prevents Audi from enabling the self-driving features. It now appears that Audi will not roll out their Traffic Jam Pilot system in the UK until 2019. 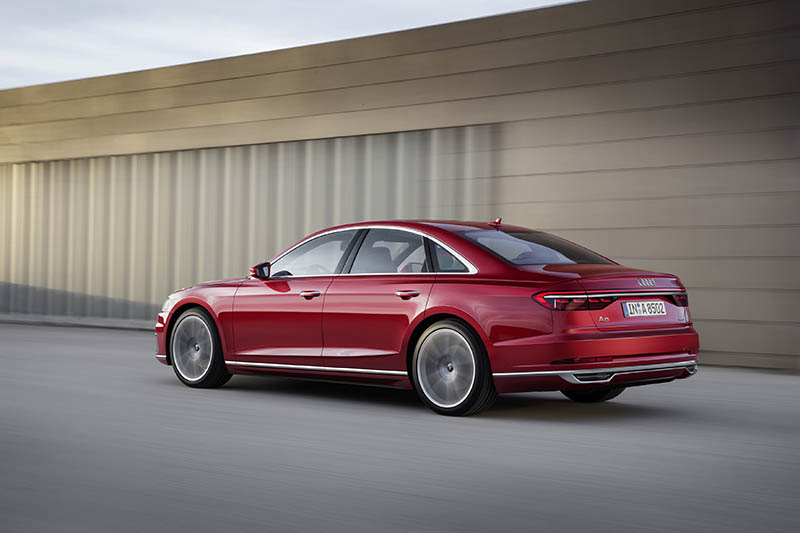 The Audi A8 has been developed especially for Level 3 highly automated intelligence driving assistance systems. Their AI Traffic Jam Pilot takes charge of driving in slow-moving traffic at up to 60 km/h on motorways where a physical barrier separates the two carriageways. The system is activated using the AI button on the centre console, prompting the traffic jam pilot to initiate starting, accelerating, steering and braking.

It is the first introduction of technology that will enable a driver to take their attention away from driving and watching the road ahead in slow-moving traffic, while they doing anything else in the car. When the system reaches its limits, the driver is alerted that they must then resume manual control.

Basically, the UK blockage is due to Regulation 104 of the Road Vehicles (Construction and Use) Regulations 1986, which currently prohibits the use such technology. It reads: “No person shall drive or cause or permit any other person to drive, a motor vehicle on a road if he is in such a position that he cannot have proper control of the vehicle or have a full view of the road and traffic ahead.”

There is no explicitly reference to driving cars equipped with an advanced driver assistance systems or such being prohibited, but rather it is covered by more general current laws, which must be obeyed and under these, such technology cannot be used on public roads in the UK.

Moves are underway to have the UK’s Department for Transport (DfT) amend Regulation 104, but this is extremely unlikely to be in place until 2019. The DfT has already amended regulations to permit the use of remote control parking systems. And in this regard, Audi UK has confirmed that later this year, it will launch its smartphone remote parking feature in the UK.

The DfT is engaged in a three-year project with the British Law Commission to come up with full-proof proposals for a long-term regulatory framework for self-driving vehicles.

We await a reply from the Road Safety Authority on the current position on the introduction of level 3 autonomous technology in Ireland.