Located at the same base as the truck at the port of Long Beach, Southern California, the hydrogen power station will generate its hydrogen from 100 percent renewable sources, and eventually power imported Toyota Mirai passenger cars, as well as its hydrogen truck. 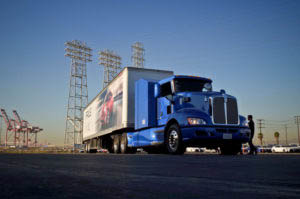 “This is the next step in Toyota’s efforts to build a clean and sustainable future powered by hydrogen,” said Doug Murtha, Toyota’s group vice president for strategic planning. “Hydrogen fuel cell technology has the potential to be the powertrain of the future. It has the power to haul 80,000 tons of freight, all while emitting nothing more than water vapour.”

The hydrogen fuel cell truck has already covered 4,000 miles during its development programme and has begun to move parts and supplies for Toyota throughout southern California. As well as zero tailpipe emissions other than water vapour, Toyota has highlighted the performance benefits of the truck, in its ability to cover an eighth of a mile in 8.9 seconds carrying 15,000kg, compared to 14.6 seconds for an equivalent diesel.

The Tri-Gen power plant will generate 2.35 megawatts of electricity and more than a tonne of hydrogen per day – enough to power 2,350 homes and fuel the daily driving of 1,500 fuel cell cars.