Toyota has handed over a seven-car fleet to Team Ireland, ahead of the 2018 World Para Swimming Championships, and has been named as an Official Supplier to the event.

Toyota is an Official Partner to Paralympics Ireland and to the 2020 and 2024 Irish Paralympic Teams and this supply of vehicles builds on that partnership.

August’s event will mark the first time Ireland will ever have hosted a major International Para Sporting event. Taking place in Dublin from August 13-19, the 2018 World Para Swimming Allianz European Championships is the biggest para swimming event taking place in the world in 2018. 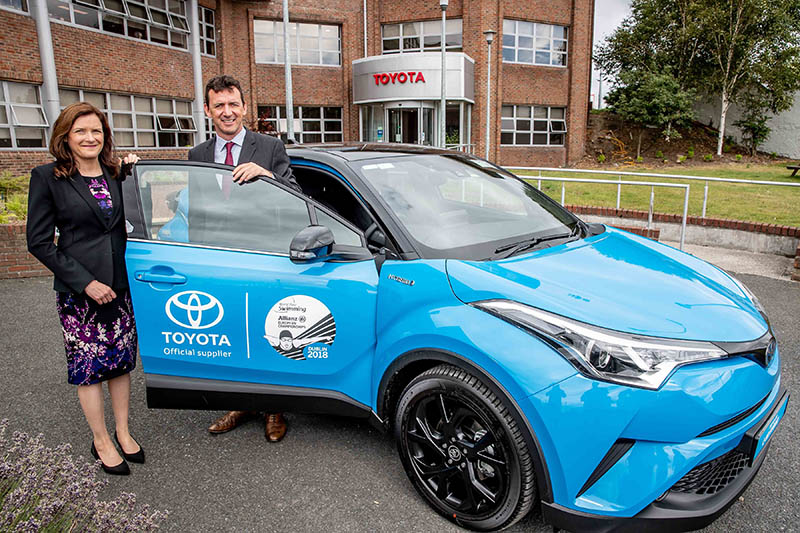 Toyota’s Paralympic Brand Ambassadors, Ellen Keane and Nicole Turner will be competing in the event, with both athletes having ambitions to reach the podium.

Over 400 athletes, representing 37 countries, across 476 individual races will be in Dublin competing for podium places and thousands of spectators are expected over the seven days of competitions.

Toyota’s ambition for the partnership is to promote a more inclusive society, help break down barriers to mobility, boost the profile of Paralympics, and ultimately create a lasting legacy for Paralympic sports in Ireland.

This is very much representative of Toyota’s “Built for a Better World” brand proposition and its vision to create a meaningful difference for the people of Ireland.

Speaking at the handover, Steve Tormey, Chief Executive, Toyota Ireland, said, “We’re delighted to support Team Ireland as they prepare to compete in the 2018 World Para Swimming Allianz European Championship. There’s a natural fit between Paralympics Ireland and Toyota Ireland’s brand values of being relentless, inventive and considerate – three traits which closely parallel what Paralympics is all about. We believe we are uniquely positioned to support the organization in this competition and indeed the ones that follow over the next seven years.”

Miriam Malone, Chief Executive Officer of Paralympics Ireland said of the partnership, “We’re thrilled to be collecting the fleet of Toyota cars that will be supporting our team over the coming weeks. With the World Para Swimming Championships just around the corner, there are very exciting times ahead for our athletes and parasports in Ireland, and with the support of Toyota, we’ll be aiming to deliver world class, medal winning, performances alongside great memories”.