Toyota Ireland has launched it’s free “Face It Down” app for iPhone and Android which is designed to save lives on Irish Roads. 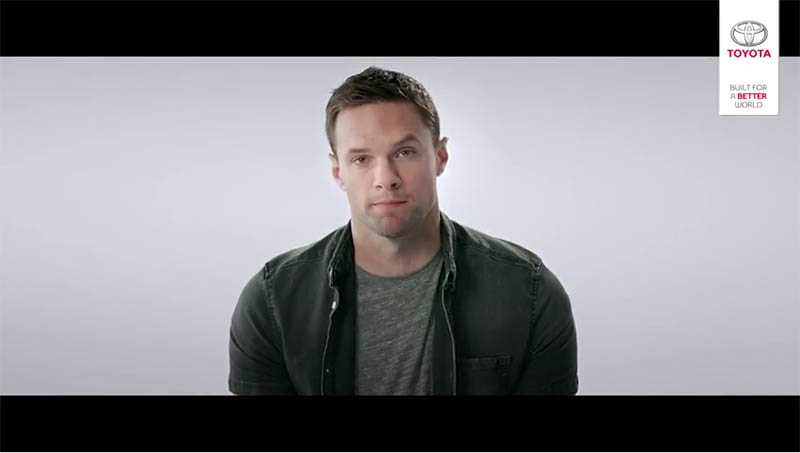 The app is launched in partnership with the RSA and Topaz. It will reward all drivers for putting their phone face down when driving, allowing them to redeem the points for a complimentary hot drink at Topaz Re Store outlets nationwide.

International research has shown that making a call while driving will make a driver four times more likely to crash, while texting makes crashing a staggering twenty-three times more likely.  As Ireland’s biggest car brand, Toyota Ireland felt a responsibility to solve this social issue by creating safer roads for everyone.

Use of mobile phones while driving is a big problem on Irish roads. Too many people still drive while on their phone to take a call, text, snap a selfie, update their s

So, as part of Toyota Ireland’s brand promise of being ‘Built for a Better World’, it has developed the app with the aim of changing driver behaviour and improving road safety for everyone. Users can download the Face It Down app from the Google Play Store or Apple Store for free.

The user launches the app before setting off on a journey and simply puts the phone face down. Points will be earned for every kilometre driven without picking up the phone. If the user turns over the phone while driving, all the points accumulated will be lost.

Points accrued can be redeemed against a complimentary hot drink for every 350 KM’s travelled at 159 participating Topaz Re Store sites across Ireland. 250 bonus points will be awarded for a user’s first successful journey with bonus points also given at interim periods.

The app launch will be supported with a heavyweight communications campaign. Toyota brand ambassador Niall Breslin will act as spokesperson for the Face It Down campaign and it is something which he is truly passionate about, “We all know the dangers of using a mobile phone while driving so it’s great that drivers will now get rewarded for not using their phone. This simple act can make such a difference to road safety in Ireland that’s why I would encourage all drivers to use Toyota’s Face It Down App”.

Other well-known faces featuring in the campaign include RTE stars Blathnaid Treacy and Eoghan McDermott alongside media personalities Michelle Regazzoli-Stone and Triona McCarthy. Members of the Irish Road Victims Association have strongly backed use of the Face It Down app.
Commenting on the announcement of the Toyota Face It Down App, Steve Tormey, Chief Executive at Toyota Ireland said, “In late 2016, we launched our new Built for a Better World brand platform and this latest initiative, designing and building an app that will encourage drivers not be distracted by their mobile phone while driving, is part of our brand promise to help make life better in Ireland by saving lives”.

Topaz Retail Director, Derek Nolan echoed Steve’s thoughts: “Topaz is delighted to be involved in this excellent road safety initiative which is very much in line with our own ethos of continuous improvement and commitment to change for the better. We encourage all motorists to download the app and pick up rewards in Topaz Re Store sites nationwide”. 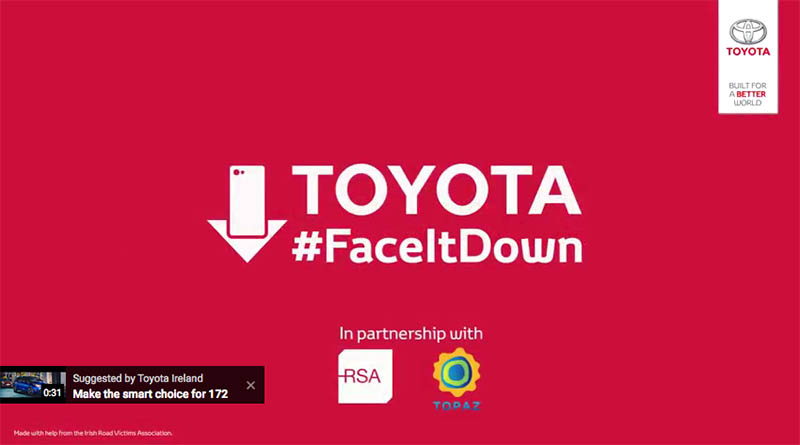 Ms. Moyagh Murdock, Chief Executive, Road Safety Authority highlighted the danger of using a mobile phone while driving, “Distracted driving could be a factor in as many 20-30% of all collisions in this country. However, the biggest distraction for drivers is the mobile. Despite the fact that using them when driving is killing people on Irish roads, rational, intelligent people continue to text, make phone calls, take selfies or update their social pages while driving. When you use your mobile behind the wheel, taking your mind and eyes off the road for just a split second can destroy everything forever. ”

“That’s why the RSA is fully supportive of the Face It Down campaign and commends Toyota for endeavouring to make a real difference to the lives of people in Ireland through safe, smart driving practices.”