Sprinter Jason Smyth who won double gold in the 100 and 200m at the Beijing Paralympics has said his aim is to retain his medals at the London 2012 Paralympic Games which takes place next week. 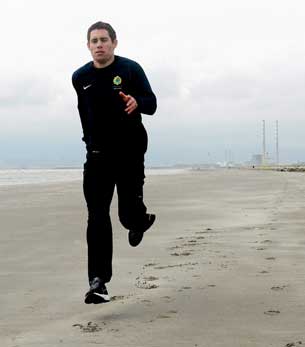 Jason, who is the fastest Paralympian in the world, is one of the Irish Paralympic team’s main medal hopes. The team arrive in London today from their pre Games holding Camp in Portugal. The Games will start next Wednesday 29th August and conclude on the 12th of September.

Derry born sprinter Smyth, who returned to Ireland last month from winter training with top US sprinter Tyson Gay in Florida, grew up with Stargardt’s Disease, a genetic disorder, which has left him with less than 10% of normal vision.

He was the first Paralympian to compete in athletics’ able-bodied European Championships (Barcelona 2010) and World Championships (Daegu 2011).
Recently he was unveiled as the first Brand Ambassador for Topaz, the country’s largest fuels and convenience foods retailer. The Company has shot a short film telling Jason’s story and will be marking his participation in the Games with a nationwide advertising campaign.
The short film about Jason’s life, what motivates him and what he hopes to achieve can be viewed at www.topaz.ie or www.paralympics.ie/

‘My success at Beijing enabled me to become a full-time athlete but training here and in the US with top athletes requires extra resources and that is why I am delighted that Topaz have chosen to support me. I am delighted to have been selected as their first Brand Ambassador and am looking forward to a very exciting summer on the track’ Smyth said.

Topaz CEO John Williamson said Jason’s new role for the Company had grown out of the Company’s sponsorship of Paralympics Ireland.

‘To say Jason has faced challenges and made huge sacrifices is a huge understatement. Not only has he faced them but he has overcome them and become a fantastic role model for us all. We think he will be a fantastic Brand Ambassador for Topaz and I know all our customers and employees will be supporting Jason fully’ Williamson said.

In early March Topaz signed a sponsorship deal with Paralympics Ireland and as part of that deal the Company will be promoting the team and Irish Paralympic sport through its network of over 320 sites nationwide.

One other person who will be keenly supporting Jason in the Olympic Stadium is his fiancé Elise Jordan, from Orem Utah. The couple plan to wed in Salt Lake City in December.