As vehicles have evolved, so too has wheel balancing. Today’s wheels and tyres bring new challenges for the modern workshop to undertake. Having the right equipment presents a significant opportunity to save time and money when it comes to wheel balancing and provide customers with a very pleasurable driving experience. 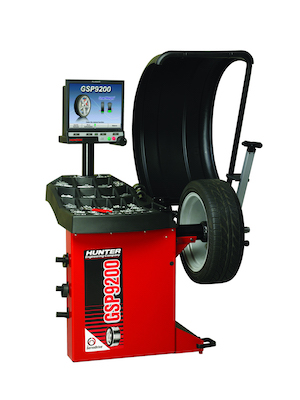 Larger and wider wheels are commonplace nowadays and these wheels can often only accommodate self-adhesive balance weights rather than the traditional knock-on style weights, which can come as a problem for traditional balancers.

Hunter’s innovative SmartWeight technology provides a better balance by separating the Static and Couple imbalance forces. As the Static forces are the ones most commonly felt by the driver, SmartWeight assigns a tighter tolerance to these while maintaining a broader Couple force tolerance. The result is a best balance for both the vehicle and the driver.

By approaching the imbalance in this way, SmartWeight provides a series of additional benefits to workshops including faster balances due to use of only one correction weight, fewer check spins and a reduction in weight chasing. The system also gives a visually better balance, the smaller amount of weight needed is less obvious and can be hidden behind wheel spokes. Indeed, approximately 35% less weight is used with SmartWeight, potentially saving the workshop thousands of pounds over the year. Customers have also mentioned a reduction in vibration following SmartWeight balances.

Overall it is the time and cost savings these benefits bring to workshops which deliver a significant return on investment and as such, potentially a better bank balance too!

To find out more about the better way to balance, visit www.pro-align.co.uk.